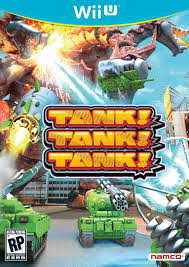 It’s time to look at a game I’ve had my eye on for quite a while. The cover and screenshots looked pretty good and it has a 3D multiplayer option. You can’t really beat that. Alas, there’s a reason why this game isn’t getting the critical acclaim that you might expect. The reason is that the game is quite limited in content and won’t last for very long. At full price this would be quite dicey.

The basic plot is that you are fighting off an alien invasion. We don’t know why all of these Kaiju and robots are attacking but it’s up to you and your tanks to fight them back. Show these guys that Earth is not on the menu. Defeat is not an option so fortunately you will have quite a few tanks to choose from by the end. The story is also co-op enabled or you can have an A.I. jump in.

The basic gameplay is probably just as you would have imagined it to be. You control the tank and drive around 3D environments as you take it to the monsters. You have your main weapon and you can also grab 2 other temporary ones during the level from enemies you defeat. You will naturally be driving around during this as well to try and dodge as many shots as possible but be warned that some tanks have a very hard time moving. Sometimes it’s best to just find a good spot and hold your ground. It definitely looks and feels like the arcade game that it is which adds a nostalgic twist to the title. The gameplay may not be quite as smooth as you would like but it feels natural.

The graphics are nice and bright with colorful designs for the monsters and the levels. It all looks pretty solid even if not groundbreaking. It’s a game that is very nice to look at visually. The soundtrack is less impressive as the game has a very small amount of tunes which keep on looping. The tunes aren’t bad but more of a selection would have been good. You can only hear the same tune so many times before it loses some impact.

Now lets talk about what hurt the game quite a bit. It’s the fact that the title really tries to artificially extend its length. There are around 35 levels in the game but at first you can only play around 8. How do you unlock the next batch? You have to beat all of the levels again with a different tank. The game runs on a star system. You get 1 star every time you beat a level. To complete the game you need dozens and dozens of stars so you have to complete each of the levels over and over again. It’s done to a very tedious degree.

I understand that the game wants you to play it a little extra, but you can’t lock the main story behind such a thing. What that shows is that the developers were nervous and thought people wouldn’t willingly replay the levels purely for the tanks. They have to trust in their game or put some good unlockables in. I played their game for a while and did the replays, but when I saw that I had to replay the 20 levels again deep into the game I just put it down. There’s just no way I was going to do that many levels just to play a few more reskins.

Yes, towards the end of the game you started fighting the same bosses and opponents over and over again. The stage limit is limited and same with the character models. As a result you can tell that this should be a short game. It just didn’t have the production values to be extended so much by just reusing the levels. The game could have been clever with shifting the levels or the goals a bit to make it more unique, but didn’t do any of that.

So, Tank Tank Tank is a fun game, but it is stretched out to the point where it loses some brownie points with you. It does have a good amount of replay value though I suppose. Beating all of the levels with all of the tanks will take quite a while. Each level is fairly short at only 1-2 minutes, but beating it over and over again just isn’t the most enjoyable experience. You also have to take into account the short cutscenes that play before each level which cannot be skipped. They’re short, but it’s the little things like this which hurt a bit. Fortunately the game does have a multiplayer option which is where most of the real replay value will come in. Now that’s a mode where you can play for a long time without getting bored.

Overall, I would still recommend this game. It goes for bargain prices nowadays so that will help with the lack of content issue. It’s a good low price option for getting in some multiplayer fun. You also have to give it some credit for the cool monster designs. The whole thing feels like a big Kaiju homage at times. You have characters like Ghidorah and King Kong running around and again, the core gameplay is fun. That’s still the most important part of any game and this one nails down that part so you’re still going to have fun. It’s best in short batches and if you follow that you’ll be entertained for quite a while.