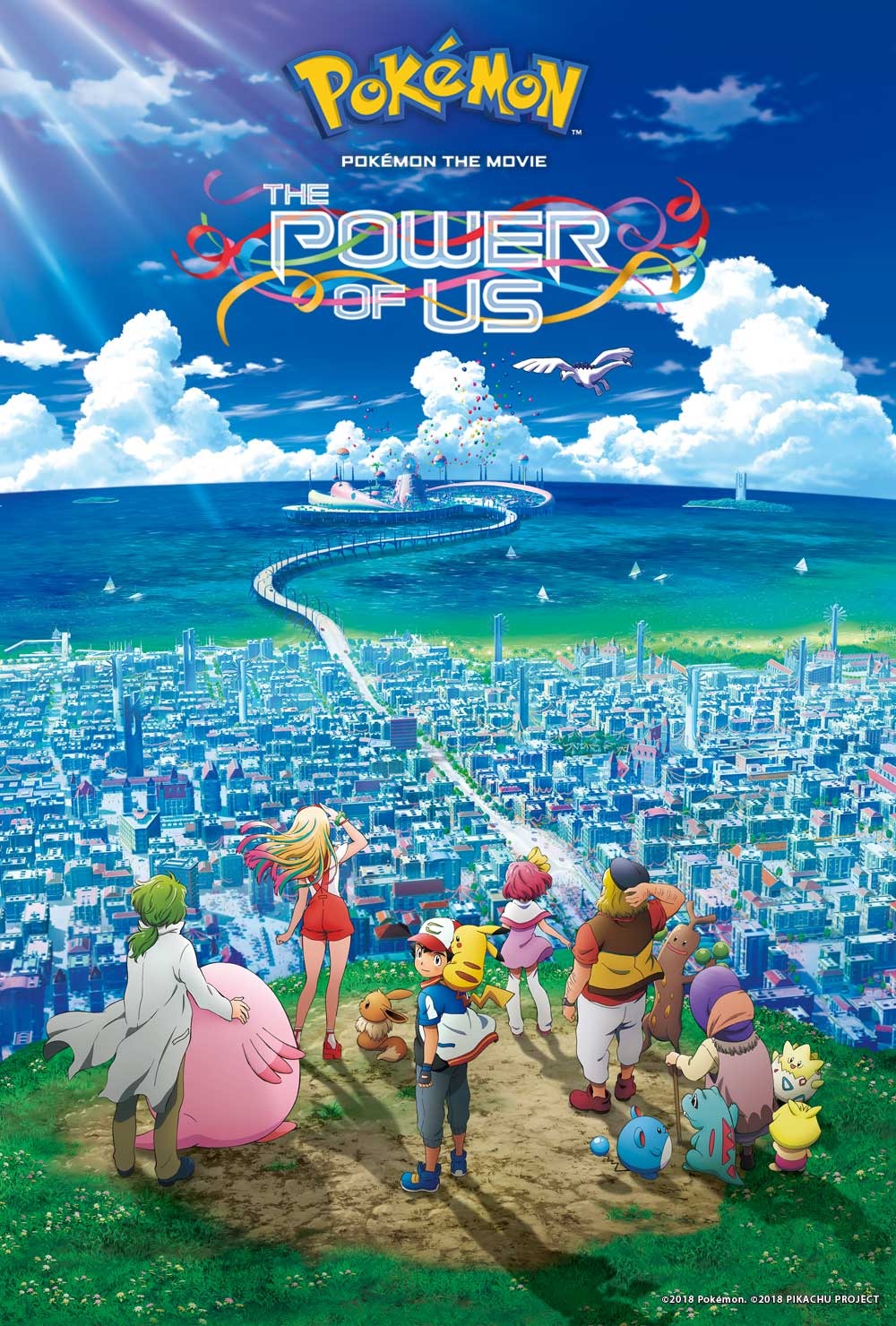 It’s time to look at the latest Pokemon film. This one is the follow up to the last adventure which was a reboot of the series. That one was the worst Pokemon film to date though which limited my excitement for this one. Furthering that was the fact that the promotion for this film was about how it would be an ensemble cast this time so it wouldn’t just be Ash stealing the show. That’s definitely not what I was hoping to hear at this point. It is unfortunately another weak Pokemon installment, but still an improvement over the last one. Put it this way, as a film it is decently good, it’s just not up to the usual Pokemon standard.

The film revolves around a few characters as I mentioned. One of the main ones is a girl named Risa. She doesn’t have any Pokemon, but is asked to catch one by her sickly brother. Heroically Risa decides to go catch one, but she gets bad advice from the local liar Callahan which causes her to waste a lot of time. Fortunately she runs into Ash who just finished saving a little girl named Margo. Ash shows her how to catch the Pokemon, but now they have bigger problems. The flame lighting the village has disappeared and without it Lugia won’t know to show up and save the village with another year of wind. Ash and friends must unite to fix this situation but can they do it?

Right away you’ll feel a little bad for the village here since it must be rough living on the edge like this every year. If Lugia doesn’t show up even once then it seems like everyone in the village will die. That just doesn’t seem like the most enjoyable living situation. You’d think Lugia could improve the town a bit or maybe give them wind for multiple years at a time. It’s also been so many years that you’d think he could find the village from memory. Ah well, either way Ash and the others have got this.

The film goes out of its way to show you how mean the villagers are early on though. For example, we have the bullies who try beating up Margo. They would have seriously attacked her if Ash hadn’t stepped in which is pretty crazy. Then you have the old lady who doesn’t like Pokemon and is constantly trying to shoo them away. She has a backstory which explains this of course, but it doesn’t help her current disposition all that much. The backstory was also a little too dark. No reason a Pokemon had to die there. It’s like the film is trying to bump off a Pokemon in each of the new films. As we are only two installments into the series it is hard to tell so far though. We’ll know more as the series goes on. Needless to say, the old lady wasn’t all that good.

Then we have Callahan. His whole gimmick is that he’s always lying which is pretty dicey. A lot of fun characters have been invented this way of course, but to effectively pull off this cliche the character has to be quick on his/her feet. Look at Hercule or King. Both characters work so well because they do a good job of hiding their lies. This guy doesn’t even try. Part of the reason for this of course is that we need to wrap up the plot before the end of the movie so it has to go wrong almost immediately as opposed to dragging it out for the entire series. Ultimately Callahan does end up getting past his lying ways, but he sure put a lot of people in danger in the meantime.

Then we have the scientist. His problem is that the film makes him way too timid. Not only does he have a hard time speaking in public, he can’t even talk to an old lady without shaking in fear and crumpling to the ground. The former is realistic while the latter is just trying too hard to be funny. Even during his big speech at the end where he finally mans up the character ends up getting scared. That’s not how you finish a character arc. That just cements the fact that the character’s arc didn’t have a good ending. He finished as he started. The worst part for him was when he put in the wrong tape during the presentation though. At the very least he should be good with the technology. That should be the one area where he is confident and knows what to do even if he panics for the rest. Otherwise he really doesn’t have any business being one of the professionals.

So those supporting characters didn’t work so well. Lets talk about the ones that were good. I did like Risa. She did a good job of helping out and taking charge when necessary. She got past her leg injury to help in the climax as well. Even after being tricked by Callahan she was nice enough not to rat him out. Then we’ve got the new Pokemon Zeraora. He’s a pretty cool electric type. He reminds me a bit of Manectric. This guy is pretty strong and fast. It is a bit dicey with how he just starts trying to fight Ash and co. at the end though. I feel like the situation should have been pretty obvious to him by that point. Nearly destroying a bunch of innocent Pokemon in the process would have been quite a blow s well.

He does give us a great fight scene/2 where he shows off his speed. Speed is very important for a fighter and Zeraora uses it quite well. It’s a shame that he is weakened for most of the film though so we can’t see his upper limits. I’d say that he seems to be a match for the Pesudo legendaries but based on this he probably wouldn’t beat the main ones. Still, I like the design and I look forward to seeing him in Pokemon Go at some point.

Ash looks great here. This is easily one of his best appearances to date. His opening scene has him catch a projectile that almost hit a kid. He then stops some poachers from getting another Pokemon. While this version of Ash may be early on his journey he carries himself as a seasoned veteran. Truly this is the Ash that you want to see in a film like this. He’s basically perfect and this is one of his best appearances to date. He steals any scene that he is in. You also get the feeling that there are very few who can beat him in a Pokemon battle in this universe.

The animation looks pretty good. It’s much better than the art direction we got for Sun and Moon, but not nearly as good as Kalos so it’s somewhere in the middle there. It seems to be trying to look more mainstream if I had to try and put the look into words. It does excel when the fight scenes start though. The battles with Zeraora are quite excellent. That’s why it’s a shame that we don’t get much action in this film. There are only a few quick skirmishes. The rest of the film is more about the dialogue which is fine, but the characters aren’t quite interesting enough to make that as exciting as a good fight. The soundtrack is also not that inspired for the most part. We get a good song or two, but most of the ost is a bit flat.

There’s also one scene where everyone looks bad. It’s borderline a plot hole. After Ash stops the poachers they decide to run and the mayor says to just let them get away. Why? These guys are breaking the law and if you let them gt away they’ll hunt more and more Pokemon. I didn’t agree with the decision at all. The worst part is that the poachers do not appear again so they really did get off without any repercussions. It just wasn’t a well written scene at all.

Overall, The Power of Us is an ambitious concept but one that did not work. I think if you want to do a big ensemble cast like this then they have to all be new characters. Don’t have Ash in it at all. Make it a very unique Pokemon spinoff that takes place as its own thing. Alternately, they should all be characters we are familiar with like Misty and Dawn. You can’t mix and match like this because then the new characters just seem like they are stealing away Ash’s screen time and that’s one thing that you don’t want to see happen. All in all, I’d still recommend this film but only if you’ve already seen the others. If not, I’d suggest checking out the original movie or Destiny Deoxys instead. Those really help define what a Pokemon movie should be.

2 thoughts on “Pokemon The Power of Us Review”