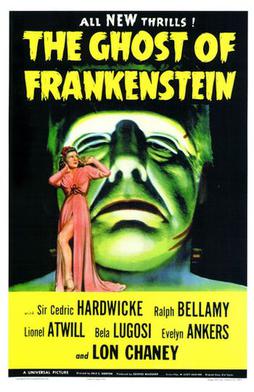 It’s time to look at another Frankenstein film. This one brings back the classic monster for another round. It’s a pretty uninspired sequel that doesn’t have much going for it, but I suppose it wasn’t quite as terrible as some of the other Frankenstein films. It would have probably worked a lot better if there was actually a ghost rather than Frankenstein;s monster just showing up like normal once again. After all, it’s just like any other Return of Frankenstein type film in this scenario.

The film starts with the villagers still living in fear after the reign of Frankestein. They tell the mayor that he needs to let them burn down the old house so they can be rid of his curse once and for all. He gives them permission but the explosions and fire help wake the monster from his slumber. Ygor manages to help him escape and decides that it is finally time for revenge. To this end he locates a scientist by the name of Ludwig and blackmails him into co-operating. Are the villagers about to go through another dark age? (Well, Frankenstein’s monster isn’t quite that tough so this may be a little overly dramatic.

It’s a little hard to know who to root for here since all of the characters are a bit iffy. While at first Ludwig seems a little reasonable, his mad scientist nature starts to overpower him by the end as he makes some dicey decisions. Even considering dissecting the monster shows that he is not on the heroic side here. His assistant is no better and may be even more corrupt. Then you have Ygor who wants the monster’s power for himself so he can destroy the townsfolk. Even Frankenstein the creator shows up as a ghost to suggest brain transplants. Basically, the monster is just a means to an end for most of these characters. They barely care what happens to him, they just want to achieve their own goals.

That could have ended up being an interesting plot point. Maybe try to get us to sympathize with the monster more than the townspeople that he was supposedly terrorizing. After all, they seemed to be the actual corrupt ones most of the time. In almost every situation in the movie they were in the wrong. Take the early scene where some kids are picking on a little girl. The monster steps in to break it up and also gets her a balloon. The problem is that the townspeople were afraid of him and so they try to stop him. One even comes close to shooting the monster while he was holding the girl. Even if he didn’t hit her directly, the fall would have certainly finished her off. The other people tried to wrestle him to the ground and again…this wouldn’t bode well for the kid. They’re on top of a roof after all.

Naturally the monster doesn’t handle this well and destroys the humans but they put him into a lot of bad spots. Then even once they promised not to hurt him they beat him up as soon as the girl was away. It’s just a very rough film for the monster. Then he ends up effectively being mind controlled by the end. The film gave him a pretty bad hand and it’s just hard to figure out how much of that was intentional. I think it’s fair to say that we aren’t supposed to like Ludwig and the other scientists. The whole town though? It gets tricky.

Ygor also makes for a pretty annoying main villain. He stands out so much, how do the people not realize that he is one of the villains on the outside encouraging the monster the whole time? He has the blackmail on Ludwig, but I feel like the scientist should have been able to turn the tables on him very quickly. Why should anyone believe such a crazed man? That would have been Ludwig’s defense and I think it would have worked.

There’s a lot of story here and yet there isn’t a whole lot of compelling elements. What we do get is pretty by the books without anything to really help it into the next level. There are just no characters to root for and that’s the problem. Even if Frankenstein’s monster isn’t evil like the others, he isn’t particularly interesting either. As a result you end up being by the sidelines as opposed to actually choosing a side.

Overall, I’d give this film a pass. In general I tend to say that for all of the Frankenstein movies. They all suffer from the same issues. Frankenstein’s monster doesn’t have enough going for him to make for a good villain and doesn’t have enough character to be a good hero. The supporting cast are typically pretty annoying and the whole thing ends up being unfair for the monster. It’s not like he can even defend himself in most versions vocally since he can’t speak. As a result, every character can lie or gang up against him and he never even has a chance to prove his innocence. That’s the worst part of this whole arrangement. What helps this film a bit is that it isn’t quite as violent as the early Frankenstein titles. There isn’t really any action until after the court scene and by then you’re around halfway through the film. That actually works in its favor and the first half of the film does beat the second. Still, it ends up falling through the usual Frankenstein plots.