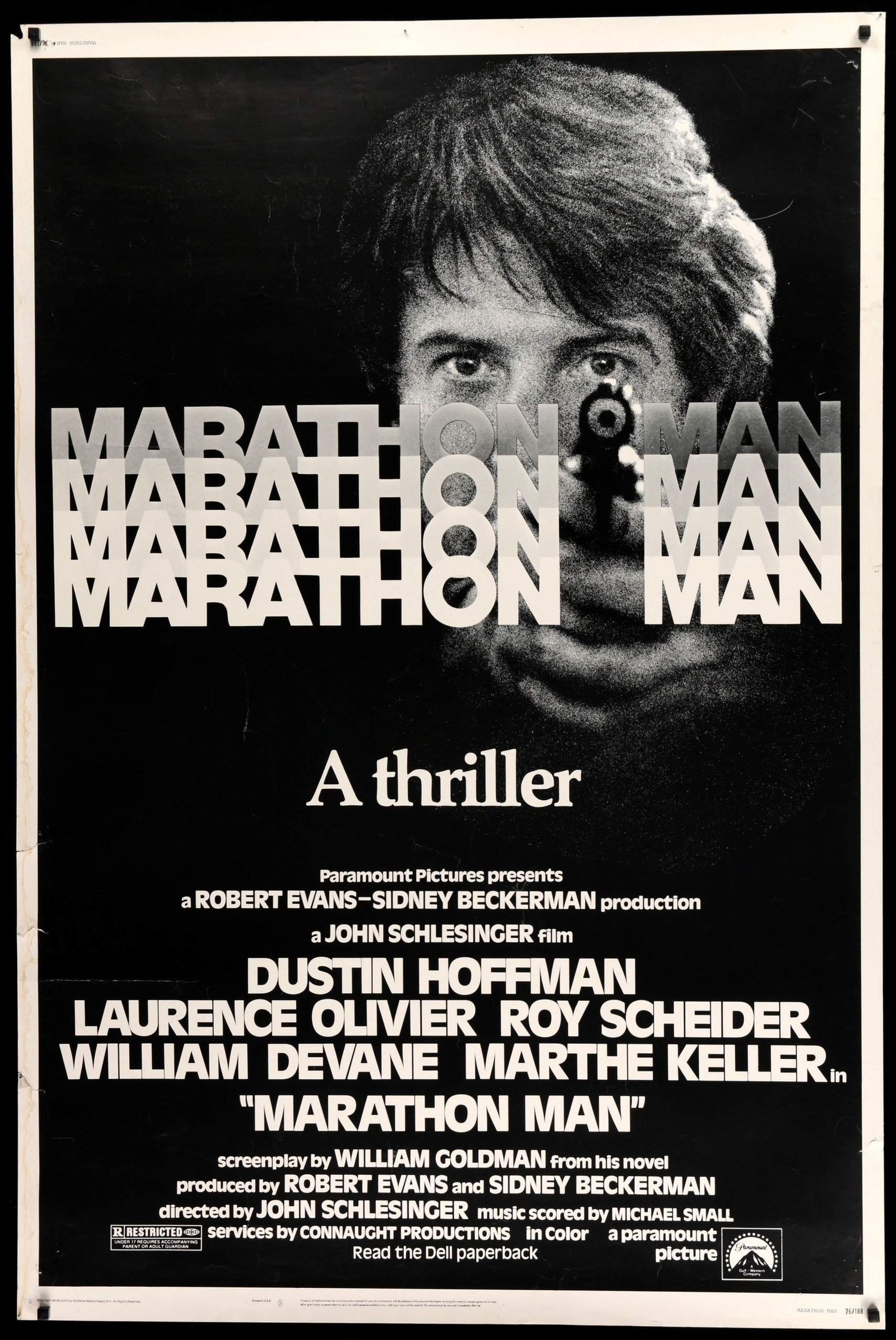 It’s time to look at an old conspiracy film. I think it probably would have ended up doing better if we had gotten to see more marathon running and such. As it stands the whole marathon thing is only useful/relevant for one or two scenes. A weak script and over the top violence ensures that this film doesn’t end up going far. It’s not a suspense-thriller that will be fondly remembered. If anything it quickly gets overshadowed by many other titles.

It turns out that a few Nazi troopers survived and they are bent on causing havoc in America. They have a lot of gold in one of our vaults and plan to re-obtain all of their riches so they can go ahead and launch future schemes. They’ll have to find the key to the vault though which was lost in a big explosion. Agents Henry and Peter have to stop these guys, but there may be more forces at work here than they know. Meanwhile a local student named Thomas is just trying to live an ordinary life. He is running around a lot to prep his marathon skills, but isn’t looking for any trouble. Still, trouble finds him as he is roped into this secret battle of countries. Can he survive this experience?

I’ll give the film some credit for keeping the main character separate from the plot for quite a while. I dare say that Thomas doesn’t have anything to do for the whole first half of the film. He’s just walking around and trying to get to know other students at this point. Meanwhile his brother Henry is a secret agent who seems to work for hire. He apparently used to be the best in the business although he has slowly grown pretty sluggish over the years. The villains want him dead and he knows it, but getting out of the situation is still pretty difficult. He didn’t handle his final scene very well though. He basically just walks up to the villain and starts making threats. What did he think was going to happen? I mean, you’ve got to keep your guard up for moments like these, especially if you’re making threats at someone. Otherwise you’re just asking to get stabbed.

As for the main villain, Szell, he’s basically your average mad scientist. In this case he is also a dentist. He’s not the smartest tool in the shed as he very nearly gets caught several times as he suspiciously walks in and out of jewelry shops. The whole dentist thing is also really just used so we can get a torture scene in the film. Definitely another moment that hurt the film quite a bit. By the end Szell refuses to betray his honor and throws in one last attack, but even that shouldn’t have been as close as it was. The characters in this film seem to keep forgetting that he is an old man.

Back to the lead, Thomas isn’t a very good character. For starters he is very gullible. Henry easily sees past Elsa’s fake cover story while Thomas doesn’t care. So long as Elsa gives him a nice time he doesn’t mind that he’s being played for the fool. That’s not the kind of lead you want. He also should have known that something was up since the whole situation with Elsa was incredibly convenient and contrived. As if a proper romance would start so quickly. He never becomes a lead that you can depend on and naturally I wasn’t a fan of Elsa either. She’s not someone you would want to trust.

Peter is another agent who was Henry’s best friend. I think the problem with his character is that he looks evil from the start. Yeah, that can be deceiving I suppose, but he acts so suspicious in his very first scene that you instantly don’t trust him. It’s so obvious that you feel like Henry should have noticed as well. He doesn’t technically work for Szell as they each have their own motivations, but at the end of the day they’re both villains. Now, you may want to know if it’s possible for 3 guys with guns to lose to one amateur with a gun and that fight happens in the film so I won’t tell you who wins. All I can say is that if you have a gun you should probably use it. Otherwise you’ll just end up being shot.

As I mentioned the writing isn’t particularly good here. The film had to air-beep so many words you’d be surprised. None of the characters are particularly likable and the villains didn’t even seem well coordinated. How come none of them thought to look for the key in the rubble of the explosion? Why bother with a second key when you have a backup? Why not capture Henry instead of offing him so they could make him talk? You’ll be questioning the characters quite a lot throughout the movie. Likewise, Thomas rarely makes the right call. If you hear someone fiddling around in your apartment and breaking things down then you should probably get out of the bathtub right? That will just leave you as a sitting duck if you stay in there. I already spoke a bit about how the romance was very rushed so no need to elaborate on it. It’s a classic love at first sight plot which doesn’t work well for any film.

Overall, The Marathon Man is a film where I’d give it a thumbs down. The plot could be a little on the interesting side, but there are too many things holding it down. The film’s pretty violent and torture scenes are always a thumbs down. The writing is bad and the romance isn’t well done. The film doesn’t do a whole lot of things right. The only good parts here are when Henry is running around acting like he’s James Bond. That definitely feels like the approach the film was going for at least. I do like the fact that he didn’t immediately die when someone tried to choke him with the wires as well. In most films they go down immediately so at least here he put up a fight and even turned the tables. Even the fights are pretty violent, but this was a good example of flipping over the usual trope. If this film sounds interesting to you then by all means check it out. Otherwise I would sooner recommend watching The One.