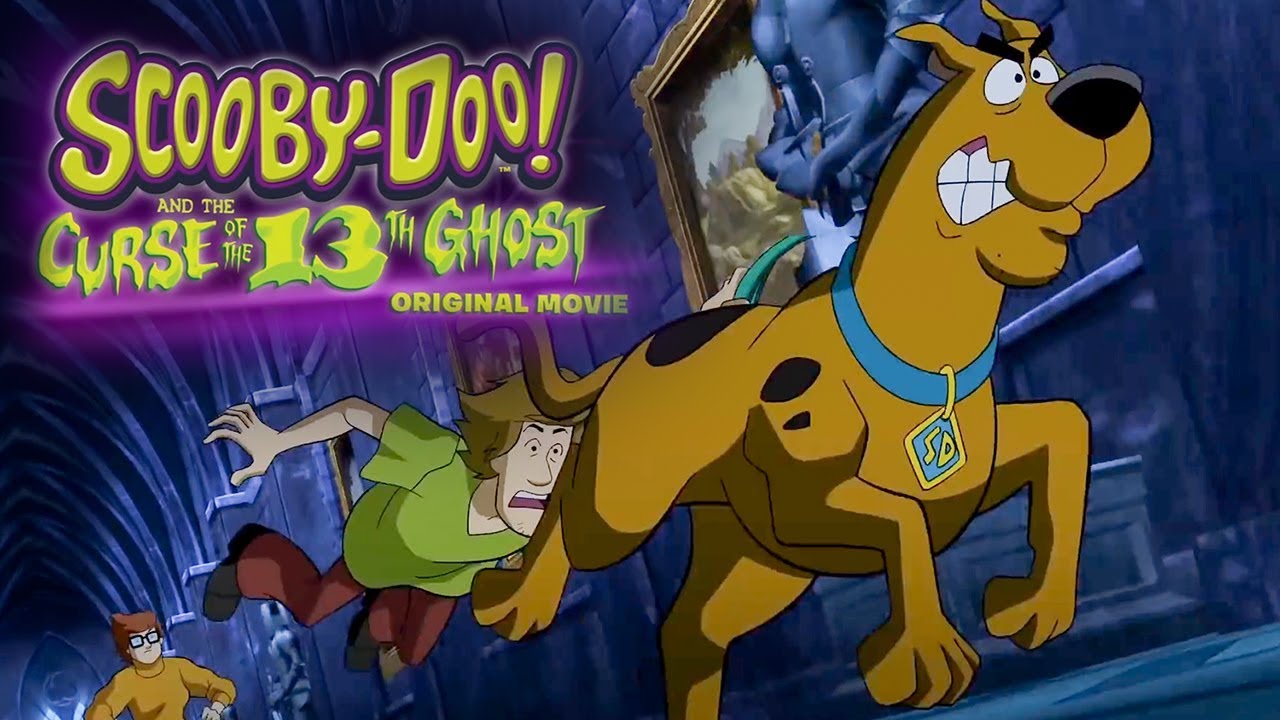 It’s time to take a look at the movie sequel to the classic 13 ghosts show. This one finally shows us the 13th ghost and how he stacks up against the first 12. It’s a fun movie as they all tend to be although the writing was lacking somewhat here which does prevent it from being nearly as good as it could have been. It’s more or less what you’d expect but the lack of a supernatural twist does hurt it somewhat.

The film starts off with a flashback where Vincent and Mortifer are running away from some demons. Mortifer is unfortunately caught and destroyed (Someone dying in a Scooby Doo film? Immediate red flag) while Vincent escapes with the box. Together with the Mystery Inc he recaptured 12 ghosts. However, Scooby, Shaggy, and Daphne decided to pretend that they did not know who Vincent was and threw the magic ball in a closet somewhere. Well, in the present the gang are having a garage sale as they were forced to stop being detectives after messing up a case. They need some quick cash. Fortunately, that’s when the crystal ball pops up and Vincent begs their help in stopping the final ghost. Velma and Fred are confused so now Daphne will have to step up and lead the team. Is she ready for this?

Unfortunately this is where the film is at its weakest. Rather than make Daphne a good leader it chooses to make Fred a bad one. Suddenly he doesn’t know how to set up a trap and the film goes out of its way to make him look bad. Daphne has to set up the traps because he forgot how to do so. He also can’t drive stick for some reason so he has to let Daphne drive the whole time. She basically takes control of the team away from him and part of the moral is that she was always the better leader. Fred even admits in a rather heart warming scene that he was never a leader, that’s just what they had thought. He’s a Cheerleader and decides to start cheering for everyone. He just looks really bad the whole time and it must have been a rough time for his fans.

Meanwhile, Daphne looks hardcore of course. To make up for Fred she has to double down in how effective she is. Daphne does give up a bit easy, but for the most part I’d say that this is still one of her best appearances. At least she is ready for this fight. You can’t say the same for Velma. Naturally she is still sticking to her story that there are no such things as ghosts. The film does its best to make her fairly justified in this by the ending though. Who knows, maybe it was all mass hallucinations or something. It would have been better if she didn’t keep flipping back and forth though.

Shaggy and Scooby are the same as always. They constantly panic and eat so not much else to say there. The scene of them meditating with the villain goes on a little too long I’d say as well. No way he would actually buy into that I’d say. The rest of the humor is pretty good though. Vincent makes for a fun supporting character. He’s a bit more helpless than I had expected but I did like all of the puns he would make. If he actually can’t use magic either though, it does give Velma’s theory a little more weight. There’s also a local teenager around. I won’t say who he is, but I think you’ll know immediately who he is. This isn’t the kind of film that has a bunch of suspects so if a new character is introduced you can start narrowing down who he must be.

The animation looks pretty solid as always. The team has this franchise down to an art. It’s looked good all the way back from when it first started all the way through the current days. The animation could fool you into thinking this was a DC film at times. The animation styles always look really similar and I suppose that makes sense as well since Warner Bros is involved. There isn’t much of a soundtrack though, but the series isn’t exactly known for that. The movie’s fairly short, but the pacing is good so it never gets boring or anything like that.

Once the final twist occurs some things won’t seem particularly realistic though. Lets just say that one character has to be an absolutely fearless racer with superb driving skills. This villain shows up everywhere and has quite a few skills. I dunno, I’d like to have seen the heroes challenge the evil car a bit more rather than running away the whole time. I suppose that almost may have been out of character I guess, but the team’s been through a lot so they shouldn’t really fear anyone at this point.

Overall, Curse of the 13th Ghost is not a film that will leave a lasting impression on you. It’s just a lot weaker than some of the recent films like the Wrestling ones, Cooking challenge, the outer space one, blue falcon, etc. It’s not so much that this film is bad because it isn’t. It earns a pretty good score. It just feels more like an average adventure compared to the rest and part of the problem could be the fact that there is no actual mystery here. That’s sort of the main focus of the series. You can get around that at times with a compelling premise of course. This one had a good premise, but simply didn’t follow up on it. That’s what held the film back.