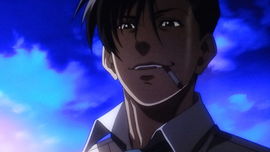 Suggested by iKnowledge Rock isn’t particularly good with guns and other weapons. He’s reasonably strong to be sure, but that’s not quite good enough to deal with the Joker. Joker is Batman’s most dangerous adversary so he’s definitely not someone that you can take lightly. He’ll quickly take the edge in this fight and also does know some good hand to hand combat abilities. Rock would need some real steel to win this battle. Joker wins.

2 thoughts on “Joker vs Rock”