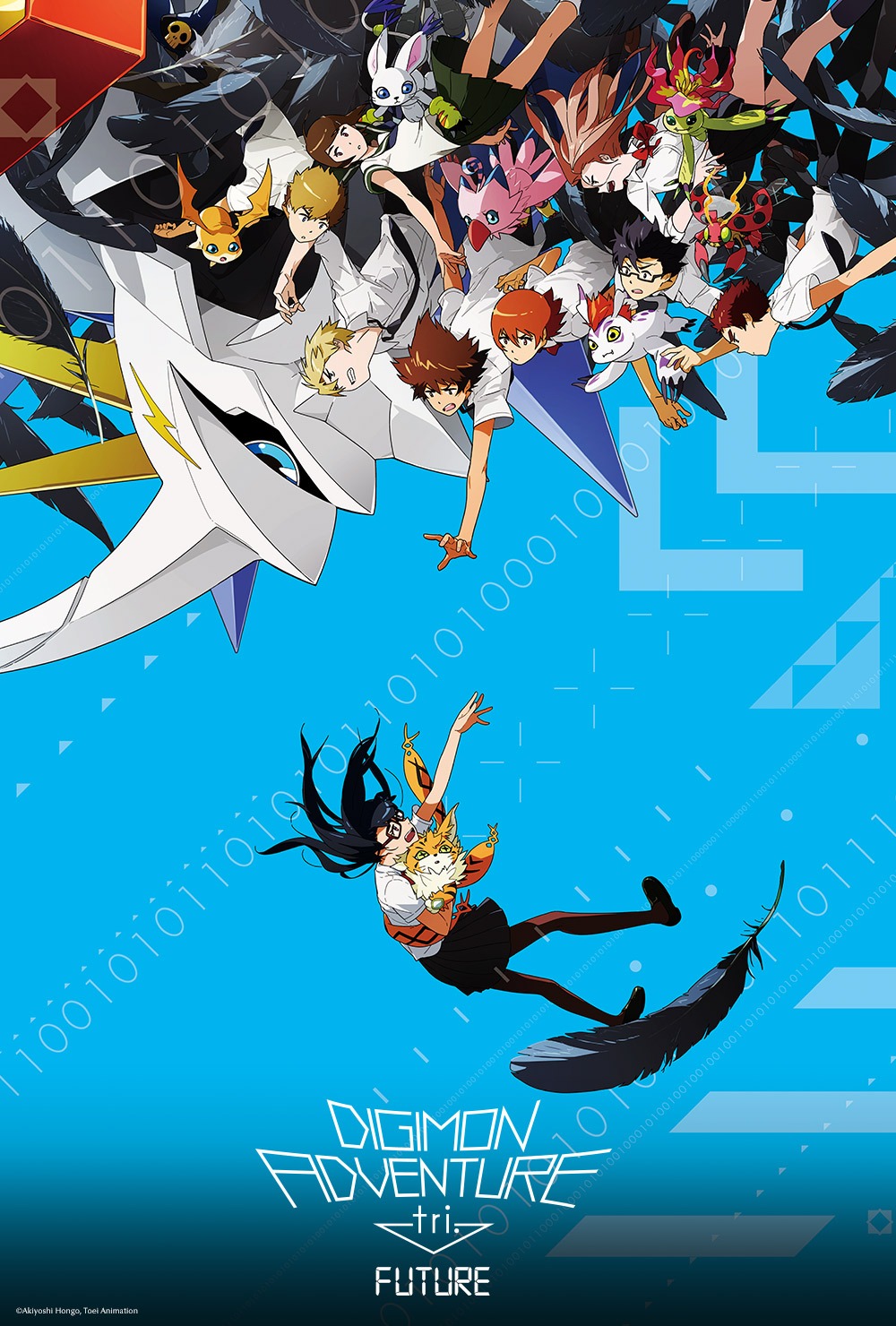 We’ve finally made it to the final installment in the Digimon Tri series! There were quite a lot of plot threads still dangling so does this one manage to finish them off? Well, it does end the main plot, but for the most part we still don’t know a whole lot about what was going on in the back end. Perhaps it’s intentional as the Digidestined are also left in the dark for the most part. So, I wouldn’t clal this a rushed ending, but I wouldn’t say it is a super satisfactory one either. It’s ultimately a fun sequel package that will have a good amount of replay value, but I do think the next follow up will likely be far better so long as it goes back to its roots. The film does end with a nice potential cliffhanger. Whichever option it chooses should work out pretty well.

So last time Tai seemingly died when the cliff caved in due to an unnatural earthquake caused by the Digi souls and the rulers. Matt is now the temporary leader and the group decides to head back to the human world once again. They’ve basically been playing ping pong across the two worlds if you think about it. Unfortunately Meicoomon has digivolved once again and is now a cosmic being that seemingly can’t be stopped. The heroes are ready to accept their end, but if they’re going to die anyway they’ll go down fighting. Even if there is a chance for victory it may have to come at the expense of Meicoomon. Is there a way to save her or will they have to sacrifice the one for the many?

One unfortunate part about having Meicoomon be so powerful here is that fact that we can’t get any real fight scenes as a result. Meicoomon’s final form is too large to really take shots at the opponents and at the same time it’s so durable that it doesn’t need to dodge opponent strikes. This leads to a bit of a stalemate where the heroes can talk to it, but don’t do much else. There isn’t really any kind of big fight here so much as we just get a quick strike. It’s too bad since the films usually had such good fights when they did show up. I suppose as the finale the thought battles were the most important part here. So lets talk about those.

Throughout the series one of the subtle debates has been if the heroes should destroy their Digimon partners if they were to ever turn evil. Their bonds of friendship are strong, but apparently not absolute. Well, Meiko has been asking the team to destroy Meicoomon if necessary but they were confident that it wouldn’t come down to that. Well, in this film quite a few of the characters decide to go ahead and do this even while Kairi objects. Kairi’s objection is rather half hearted though as she says she’ll never forgive them, but then follows that up by saying that she won’t try to stop them or anything like that. If you really think it’s wrong then you should do something. Either way it’s not really a good look for the heroes. There wasn’t much of a choice by the end of course and mainly I would blame Meiko for not trying to stop them. For the other heroes they’re basically acknowledging that their bonds to each other are more important than Meiko. Everyone’s got to make a choice and they made theirs. Meicoomon also seemed pretty corrupt from the start so maybe he was all gone but it does feel like the villains got a bit of the last laugh here as a result.

Think about it, by the end the villains managed to murder a bunch of people, they’ve convinced the humans that all Digimon are evil, and then they convinced the heroes to destroy one of their own. Now when the factions ever decide to return, whether it be Homeostasis, The Digi King, or Gennai, they’ll have quite a lot of confidence here. Gennai also gets away with way too much here. He shows up to taunt the heroes quite often and they usually just stand in watch. Case in point, Gennai shows up in this film to reveal that he let Tai and the professor live just so they can choose which one of them gets to escape. None of them even try to attack Gennai as they just get resigned to their fate. The Digidestined seem to have lost most of their fire by the end and if that was part of the villains’ plan then they really did succeed.

With Tri over and the benefit of hindsight, I think the problem here may have been that Tri attempted too many things. The writers clearly had a bunch of ideas they wanted to throw around, but there’s just not enough time for all of them. This would have worked better if it was a full TV show. I also think some parts of the plot are swept to the side, but don’t make sense if you think about them. Think of all the kids who were kidnapped/vanished thanks to the villains? We’re talking dozens to maybe even 100+ and nobody found out? The government was covering for the villains because they’re naturally evil as well, but surely the parents would have said something. The original main characters know the 02 cast as well so it’s even more suspicious that they weren’t able to find anything out. Maybe the government got the parents as well (Can’t recall if they had a cameo) but the more people you kidnap the harder it is to hide that. The 02 cast also never actually get to appear so that’s a shame for their fans.

The animation looks nice as expected. We get some fun visuals with Omnimon’s form at the end. It’s definitely a powerful moment and for most of the film the world is covered in darkness so the colors do tend to pop out. Unfortunately for the soundtrack my favorite theme didn’t show up this time. In general the soundtrack is pretty subdued but it works well enough for the scenes it is present in.

Overall, Digimon Adventure Tri certainly won’t go down as one of my favorite parts of the franchise, it’s probably one of the weakest honestly. Still, it was an interesting experiment into what Digimon could be like if it was trying to be more Slice of Life/Cerebral instead of being more of a classic Shonen. (Honestly it probably holds up even better if you don’t think of it as a Digimon film. Think of it as standalone with no preconceived notions of what kind of fights and action should be in and you’ve got a good plot based anime film) It is a title that’ll make you think and force you to choose sides since there are usually quite a few options to choose from. Typically all you need to know is that Matt is right and Tai is wrong. I still think the first Tri film did a great job in setting up a mysterious premise and re-introducing the characters. Ultimately the follow ups just couldn’t completely cash in on this. The films fortunately do stay away from a romance angle that the various installments were hinting at. Even by the end it’s still lightly hinted at, but at the end of the day there’s a good chance we won’t see Meiko again so there’s nothing to worry about there. This is a good film to check out regardless of whether you’ve seen the other Tri titles or not, but you’ll likely be more than a little confused if you just skip to this one. I’d recommend watching them all in order.