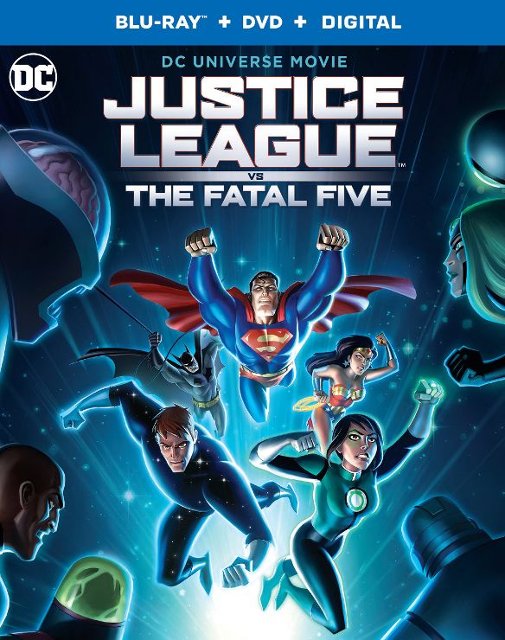 It’s time to look at a pretty new Justice League film. This title finally brings us back to the legendary DCAU so right away you know you’re in for a good time. It does a good job of really feeling like a long awaited sequel and this one can definitely hold its own in this esteemed continuity. Naturally it’s no Starcrossed or anything like that, but it’s a great nostalgia film. We have solid action scenes, writing is on point as always, etc. It’s a film that also has very solid replay value.

The movie starts off with Star Boy attempting to stop the Fatal Five. Unfortunately they are simply too strong and make it to the teleporter. In a last act of defiance Star Boy is able to finish the time shutdown so they are frozen in time as the orb crashes in the present. Star Boy also lands on Earth, but his medicine was destroyed so now his mind is slowly deteriorating. The cops catch him and he gets locked up in Arkham. Almost a year passes and the Justice League accidentally awaken the villains. They’re ready to fight but the only way to victory may be to get Star Boy on their side!

Meanwhile, Jessica Cruz has been having a lot of trouble adjusting to her new role as Green Lantern. She managed to survive a traumatic experience against a crazy gunman and the experience left her mentally scarred. She is now scared to even go outside some days and since her GL powers run on willpower, it’s a tough job for her. Still, the decision is taken out of her hands when it turns out that the Fatal Five are after her. She can let the Justice League fight them off for her or she can join in the fight and take them down. The decision is hers, but it is one that will have strong consequences.

Right away you may wonder how the Fatal Five can last more than 5 minutes against the League. It’s a fair question as they’re hitting way above their weight class here. Realistically the Fatal Five can’t do much against the League, but to even the odds the Flash, Green Lantern, Hawkgirl, and Martian Manhunter do not appear in this film. You’ve got Star Boy and Jessica, but neither one of them do much helping til we get to the second half of the film. As a result it’s really Batman, Wonder Woman, and Superman who have to handle the villains. Often times they aren’t fighting at the same time as well. There are still a lot of significant power level issues, but those are almost expected at this point. Superman gets wrecked pretty easily by these guys and then later on one of them is going even with Wonder Woman.

The Fatal Five aren’t weaklings or anything, but they’re definitely not quite as strong as you’d think from watching their fights. The heroes also have to be a little nerfed here because part of the point is that Jessica needs to be the one to conquer her fears. You can probably see the character arc coming from a mile away, but it doesn’t mean that it’s a bad one. She certainly gets a solid role in the final fight, but it makes sense since a good GL should be able to take care of these guys. I’d just make the case that Superman or Wonder Woman should have been able to accomplish something similar. Power level concerns don’t really hurt the experience. You may roll your eyes but barring something totally crazy it doesn’t hurt the score.

While Superman did get steamrolled I did like the way he fought here. It may seem like a bit of a contradiction but before going down Superman was doing a good job of knocking one opponent, dodging a counter attack, hitting opponent #2, etc. He was rarely going down to surprise attacks and was just getting hit by combos. It’s a subtle distinction that is good to make as it’s more annoying when he’s just giving opponents his back the whole time. I mean, I like the confidence, but it doesn’t work if he’s actually taking damage. Batman also looks real solid here as expected. He’s naturally the one finding things out in the background and whenever he does enter into a fight the outcome is clear. He crushes all of his opponents with ease and certainly stays cool under pressure. He does a good job of co-leading the team with Superman in the DCAU. Batman may never claim to be the leader, but the others listen when he has something to say.

Wonder Woman’s role may not feel as big as the other two, but she certainly looks good as well. Attacking Jessica may have been a little extreme, but I suppose it got the job done. She always fights very tactically such as when one of the Fatal Five tries to use her own lasso against her and WW just flips the tables on him. She uses a lot of athletics in her combat and the style seems like a mix of Superman’s and Batman’s. It’s still a little unfortunate we couldn’t see the other Leaguers, but I’m sure they’ll get their chance in the future.

As for the new heroes we have 3 to talk about. First off is Star Boy and I admit that I wasn’t a big fan of his character. At first I actually figured he was Cosmic Lad. The outfit was different, but it was filled with Stars and he kept seemingly manipulating metal at the beginning. Now I’m glad he wasn’t Cosmic Lad. He acts pretty scatter brained the whole film. There is a logical reason for this as he needs a certain chemical to stay sane, but it still makes his scenes pretty annoying. He just can’t seem to remember anything except for when it’s already too late. that’s certainly not too helpful you must admit. His powers are definitely cool though, making things heavy is definitely good enough to stop most opponents. Gravity manipulation is a very underrated ability.

Miss Martian is a new Justice League member in training and I can see why she isn’t a full member yet. She very nearly blows the whole situation in her first scene where innocents would have died. The whole thing doesn’t make any sense either since she gets real close to the villain, but stays in disguise until he whips out the gun and starts yelling. With her super strength and speed from that distance she should have been able to easily disarm him and keep going. Instead she also gives away Batman’s location. She’s pretty much a non factor for most of the film as well. She seems nice enough, but needs to keep working on how to be a hero.

Finally we have Jessica who is pretty reasonable. By the end of the film she has finally accepted herself as a hero. Her early scenes can be a bit more grating with all the self doubt, but at least she did jump in to save her town when necessary. She seems to have a lot more trouble getting started than freezing up which is good. Once she’s made a decision she does see it through. Jessica is the kind of character who will really benefit from the events of this film as she will now be a capable warrior in the sequel. The Green Lantern core is certainly pretty stacked as well since Hal, John, and Kyle are all excellent GL fighters as well. With Jessica on the team they barely even need the rest of the Justice League.

As for the Fatal Five, there isn’t quite as much to say about them. They make for a pretty good villain group. I like all of the members well enough and they gave us the team vs team fights which is always a good positive. We don’t get to see the final two members quite as much as the first 3, but they do look good once they show up. Their plan shouldn’t have gone quite as smoothly as it did though. You’ll likely see what I mean when you watch the film. They head over to OA to get the final two members and the Green Lanterns there don’t seem to have any kind of good plan. They should have jumped in before the gate was opened and then a lot of things would have been prevented. Ah well.

As expected the animation is pretty sharp here. The character designs are absolutely on point and it looks as good as ever. Now this is the kind of animation that lets you know DC is still on point. It’s not surprising as their films always tend to look amazing. If only Marvel could keep this up on their side. There’s a lot of reasons why the animation is so solid for DC, but a good part of it is the color schemes and effects they use. The attacks all have a lot of power behind them and the color stands out. They also speed up the fights quite a bit so when characters are engaged in a scuffle they’re all zipping around the place. It’s a great way to handle a good fight scene and the action here is definitely top notch. Another fun visual is when Superman zips towards the sun. His speed is definitely uncanny and to even come close to a light speed laser that already has a head start is a good feat.

While this is the DCAU, the film does try to make it clear from the start that it’s gonna still be a little more violent than the old days. Pretty much every random human who gets involved is quickly murdered and several heroes get stabbed and bleed out quite a bit. It never gets too excessive the way the New 52 films started out or other recent adventures. It’s just low enough where it doesn’t hurt the film but a little more and I think the film would have been trying too hard. The only visual that lingers is the store owner who gets murdered while the rest are pretty quick. It’s definitely all unnecessary so hopefully they keep a close eye on this for other DC films going forward.

Overall, Justice League vs The Fatal Five certainly delivers on all fronts. It’s an excellent Justice League title whether you’re already a big fan of the DCAU or this is your first experience. The writing is always on point and the cast of characters is excellent. It’s rare to have a film that basically has no weaknesses, but this is one of them. There’s a lot happening here from start to finish. Hopefully this really is just the first of many for the DCAU’s continuation saga. I’m ready to relive the golden days of comic book shows!

5 thoughts on “Justice League vs The Fatal Five Review”