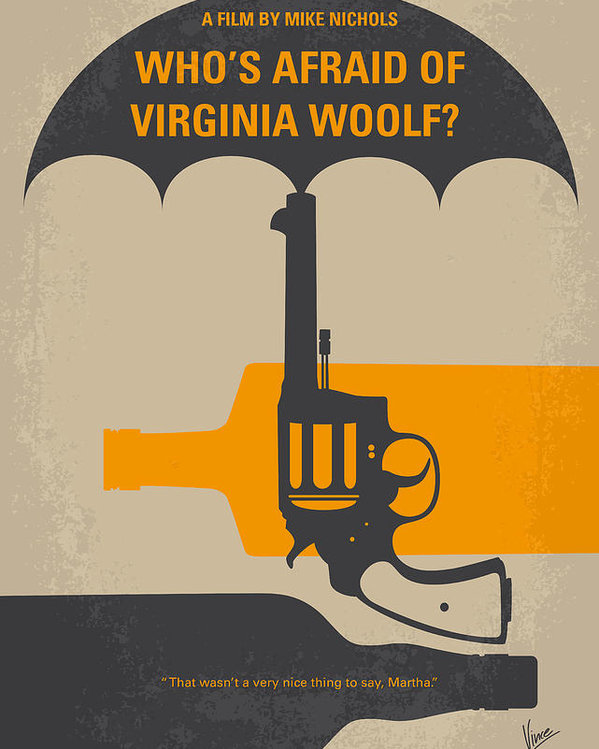 It’s time to look at an old film with a pretty intriguing title. It’s a title that refers to a rather cringy joke in the film and that really sets the tone for what you’re about to experience. This film’s definitely got an interesting premise that could work out in some scenarios, but it takes itself too seriously to work. For this kind of plot the movie has really got to be a comedy of some sort. Making it into a drama takes away its potential entirely and the film ends up getting dragged out.

The film starts off with George and Martha finishing up a party they were at. They make it home and start bickering as usual. At this point their marriage has completely spoiled over, but neither one of them want to end things. This all escalates when Martha lets George know that another couple is coming over to hang out for a while. Their names are Nick and Honey. The two come over but with the older people being tired they decide to escalate their usual name calling. George and Martha begin to openly fight with each other while dragging in the incredibly gullible younger couple. Can these two allow their extremely fragile bond to be broken by complete strangers they’ve only known for a few minutes?

This plot only works if the characters have absolutely no intelligence left within them. Just think of how ludicrous this whole thing is. Why is Nick telling George super private info about his wife when they don’t even know each other? Worse, George is a co-worker so that’ll quickly become gossip. The whole plot is just so forced and contrived that you’ll need a second to catch your breath. Likewise Martha and Honey gossip a bunch. Breaking their bonds was so incredibly easy that it must have not been much of a bond at all.

Naturally all of the characters get pretty drunk as well. Too bad none of them learned how to drink responsibly right? That would have solved most of their issues in an instant. Then the two couples start trying to get each other jealous and it works surprisingly quick. Again, the young couple must not have had any confidence to be manipulated so easily. I thought they were better than that but I guess not.

There are no good characters here though. George is your classic timid guy who gets stepped on by Martha the whole time until he snaps at the end. Then naturally he has the upper hand while Martha suddenly loses all of her fire and gets stepped on the whole time. Each half of the film might as well be a different film with how different the characters act. I wouldn’t call it good writing either as it’s just trying too hard to be somber and dramatic. There’s no reason to like George because he’s just a bully by the end and by the same token there is no reason to like Martha since she is a bully at the beginning.

Then you’ve got Nick who’s pretty mean and standoffish at the beginning, but has absolutely no nerve. Every time George makes some kind of crack about his wife Nick doesn’t do anything except try to protest about it. He should have walked out with Honey early on. He just seems scared of George the whole time and that’s definitely no good. Meanwhile Honey is portrayed as being extremely limited in intelligence and really just gets in the way the whole time. Like I said, there are no good characters here.

The characters are all written to be super annoying as well. They all get drunk and so a lot of their dialogue doesn’t even make sense. They tend to talk in circles and because of that all of the conversations are a whole lot longer than they should be. This contributes to how long and drawn out the film is. Most of the situations should have ended far sooner than they did and the film just becomes annoying after a while. There doesn’t seem to be much of a point to the movie and the plot simply wasn’t large enough to last for such a long period of time.

You have to suspend all disbelief for this film. Why on earth are the younger couple so desperate to talk to someone that they’d stay here? Who thinks it’s a good idea to hang out with this older couple at about 2-3AM? Maybe that was a red flag that these guys were also pretty sketchy. I guess we can also reasonably assume that Nick just wanted to come over to get on Martha’s good graces. He certainly does since by the end it’s heavily implied that he even cheated with her on George. The film really went off the rails. The whole imaginary character didn’t help either. It’s a twist that I figured out early on, but partially because I already had certain expectations of the film. Once it fell apart after the first 5 minutes I would quickly just guess what the worst possible outcome would be for each scene and that’s a pretty accurate way to guess for this kind of film.

Overall, Who’s Afraid of Virginia Woolf is a very mean spirited film that runs out of logic early on. There’s not a whole lot connecting this story together and as a result it can only try to survive on dialogue. Since the dialogue isn’t particularly strong, actually it’s super weak especially considering how old this film is. Usually dialogue was pretty good in this era so that was disappointing. There’s not much going for the film and it certainly has 0 replay value. The insults get old after the first few minutes and partially because of how half hearted all of the characters are. None of them are really passionate and seem to be going through the motions. Both George and Martha can dish it out, but they can’t take it. They both appear to actually be really sensitive which will make you roll your eyes. I’d definitely recommend sticking away from this film.