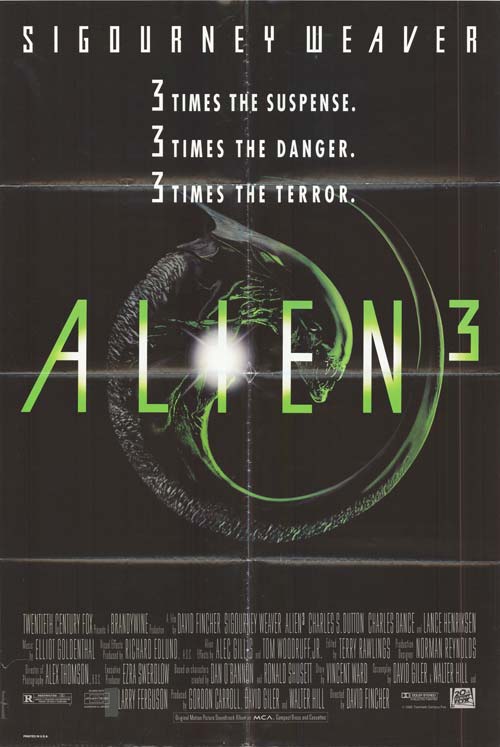 It’s time to look at the next installment in the Alien franchise. I must admit that I’ve never been a big fan of the series. While it did spawn a lot of super memorable alien designs like the Xenomorph, it just can’t hold up under pressure. This film didn’t do any better I’m afraid since right away a dog appears. That’s the ultimate red flag for any film, especially one with aliens/monsters. The films just can’t seem to resist and neither could this one. The film was dead before it ever began and that doesn’t change as the film goes on.

The film starts off with everyone from the second film dying since one of the Xenomorphs managed to make it aboard the ship. Fortunately, Ripley survived as she is the main character. The ship crashed in a giant space planet, which is used as a place for convicted criminals who would get the death penalty otherwise. I admit that for a while I forgot that this was on another planet because it may as well be Earth to be honest. It’s not like it really makes much of a difference. Now Ripley needs to just wait until a ship arrives that will take her back to Earth, but the problem is that the Xenomorph is somewhere on the planet. She wants to destroy it before leaving or it’ll keep on spreading. Meanwhile the rest of the prisoners want to murder her because they’re still evil. Can she unite the team in time to stop the alien or are they all doomed?

It really doesn’t help that this film has terrible supporting characters. From the start we’re introduced to the fact that a lot of the prisoners are still evil and certainly aren’t ashamed of the fact. They’re just here to mess up the heroes and cause trouble. They even attack Ripley at one point until another guy comes in to corral them. When there aren’t any characters to like then that’s a problem. There are only two of these prisoners who are given any real development.

First off is Jonathan. He isn’t violent like the others, but he was drunk while operating a while back and caused a lot of people to die. As a result he was charged with being the doctor in this place. While he is more perceptive than most of the other characters I definitely wouldn’t call him a good one either. One big problem here is the fact that he was told not to get too close to Ripley and immediately goes past the friend zone. This is a good chance to point out that the romance definitely wasn’t particularly good here. It’s extremely rushed and doesn’t actually serve any kind of purpose in the story. It’s just here for shock value to be honest and if you take it away then everything would still play out the same. Jonathan ultimately doesn’t add much either as Ripley never gives him the courtesy of knowing how he’s gonna die.

Since there is a hostile alien on board that’s going to murder everyone shouldn’t Ripley have just told him to watch out? At least maybe he would have lived that way. By the end it seemed reasonable that she should have told him. The other main character is Leonard. He may be a big prisoner but he has bought into the religion preached there and is trying to turn over a new leaf. That being said, he’s still okay with murdering people. He definitely has a pretty grisly end, but at least he was helpful I suppose. The actual leader of the crew was certainly not interested in making this easy on the characters.

As expected the actual script is pretty terrible as well. There’s a lot of language throughout and the sad part is that it’s pretty much expected at this point. It goes back to the unlikable cast part. Then the film’s also super violent as expected. Everyone goes down as violently as possible and they’re all picked off one by one. None of them have any chance against the aliens. If that wasn’t bad enough, then you’ve got the animal violence as the dog goes down. The film was already pretty hard to get through and when you add all of these elements up you’ve got a stinker on your side.

Meanwhile you’d expect Ripley to at least be decent right? Unfortunately she certainly isn’t. Again, I think letting Jonathan know would have been fair since she forced him to spill the rest of the details. Then she also goes outside by herself in a hostile environment when everyone warned her that the prisoners would try attacking her. She just doesn’t actually listen to anyone and keeps getting herself in trouble.

It goes without saying that this is the weakest Alien film I’ve seen. Hopefully the next ones are stronger, but I can’t say that I have particularly high hopes of that. The series died a long time ago and you could argue that Aliens was its last chance to really make a difference. How do you top the “This time it’s War!” tagline for future titles? As it is we’re basically just retreading old ground at this point. There’s not much point to the films and without a new dynamic it’ll be stuck in place. If the films want to be good they need to at least cut out the animals, give us a better locale, and absolutely the film needs to have better writing. That’ll at least give the film a fighting chance even if I still don’t like its odds.

Overall, This is a pretty dreary film and there’s nothing around to spice things up. The actual locale isn’t as interesting as the first two films. There’s also a lot less alien action for the most part. Aliens had a bunch of them running around at least which was fun. I also prefer the dynamic of soldiers fighting off aliens as opposed to people just trying to run away from them. The former leads to good action scenes while the latter is just needlessly dark. I feel the same way for all genres. There’s no enjoyment to be had in a fierce villain murdering a bunch of non combatants. I want to at least pit him against people who can try to fight back even if they have no chance.