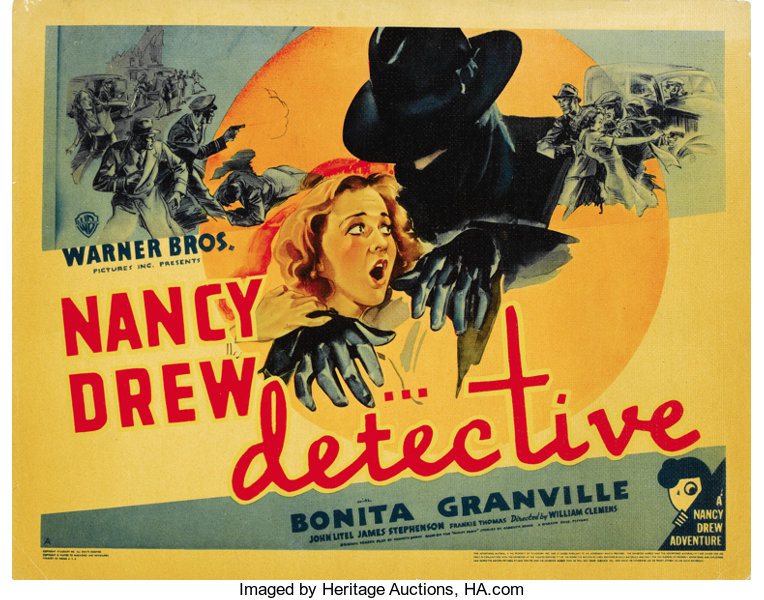 It’s time to look at a really old Nancy Drew film. She’s definitely solved a lot of mysteries in the books and has gotten quite a few movies in her day as well. I saw the mid 2000s one a while back which was pretty fun. This one also makes for an engaging watch although I admit that Nancy herself does not look very good here. She tends to panic and not look at the big picture as much as you’d expect. It’s a pretty old film though so it’s not like anyone here is a super genius. Nancy and Ted mostly just bicker a lot as they try to foil the schemes.

The main plot starts with an old lady deciding to donate some money to Nancy’s school. The girls are excited because now they’ll finally be able to get that swimming pool they’ve always wanted. Unfortunately for them it doesn’t appear that it’ll be quite as easy as all that. Ms. Eldridge vanishes the next day before she can give the money and the students show their true colors as they believe the lady never meant her words. Nancy chooses to believe that it wasn’t all a lie though and believes that she has been kidnapped. Nancy is determined to solve the case, but it’ll be difficult as she’ll need to get past the cops and her father to accomplish this mission. Fortunately she has her friend Ted for backup.

This seems to be Nancy’s first big mission as nobody in the town seems to think of her as a detective, but it’s also possible that she just never gets the credit for it. Captain Tweedy certainly wouldn’t since he likes to take the credit for everything. He’s a pretty good police captain though as he does try his best. The guy may be a bit out of his league, but at the same time he did travel a great distance to help the heroes when Nancy thought she had corners the heroes. He just doesn’t like being wrong and takes it as an opportunity to humiliate anyone who is around.

Back to Nancy though, she is determined which is a good thing. No matter how many people tell her to give up she refuses to do so. Instead she continues to search for the truth. The downside to this is that her inexperience often leads everyone else into danger. One such moment is when she goes to ask questions from a witness and then leaves him with no protection. The guy is promptly beaten up in the next scene once she has left. She also doesn’t look great at the end where she has to close her eyes while shooting and panics quite a bit. Nancy even faints which is not something you’d expect from a detective. Long story short, she’s a nice enough protagonist, but one who has a long ways to go in order to be the next Sherlock Holmes.

Her friend Ted does his best to help out, but this does result in him taking a lot of shots as well. There is one scene where everyone proceeds to drop things on his foot and even he drops a wrench on himself. He’s not the smartest guy in the area as he stops the car when the villains tell him to. Sure, they had a gun, but if he had gunned it then he would have been long gone. It’s always safest to make a break for it instead of heading back to villain HQ. Ted also fumbles the ball when he forgets to look at the bird because his neck was hurting. It’s not that tiring to be looking up for a few hours the way he was. At least he came through when he tackled the villains though. He ends up putting a lot of the work in this case as well. You could say that Nancy comes up with the plans and he executes them.

Nancy’s father could learn a thing or two as he spends most of the film getting manipulated by everyone else. For starters, he doesn’t really seem to care that someone’s been kidnapped. It’s just not his problem and that’s the justification he has for most of the film. He turns a blind eye to what’s going on so then he will be able to get away safely. It’s not exactly a heroic attitude to have and he gets in Nancy’s way almost as much as the villains do which is really saying something. At one point he sends a telegram that sounds so defeated you’ll be sure the villains sent it. Well, it turns out that he is the one who sent it after all which is just sad. He’s tricked pretty easily as well. Basically, this isn’t the guy you want as your local detective.

The writing is pretty strong as expected. It allows the film to balance out the comedy and suspense pretty well. It’s also got a good cast of characters even if they can all be a bit mean at times. Nancy uses Ted quite a bit, but then on the other hand he’s always trampling on her flower bed. That’s pretty unreasonable of him to be honest. The villains are pretty reasonable except for one of them who chickens out pretty suddenly by the end. No point in going this far if you’re going to suddenly doubt the cause. I think they were a little too idealistic here as they wanted to try and win without hurting anybody but that was never going to happen and I think the boss of the crew knew it from the start. Maybe they all did except for one guy.

Overall, This is a good start to the Nancy Drew stories. It’s a bit of a stretch that the cops didn’t notice the extra pigeons in the guy’s house, but I guess in their defense they just wanted to go home by that point. The film’s pretty good both when it’s trying to solve a mystery or just the banter with Nancy and Ted. You’ll probably feel bad for Ted by the end since his vacation definitely got very sidetracked by the end. He’s definitely a good friend though who sticks by Nancy even when things are being crazy. If you like a good low key mystery then this is a nice one to check out. The stakes are rarely high, but there’s still that element of danger which always lurks around the corner. The heroes are held at gunpoint on multiple occasions after all.