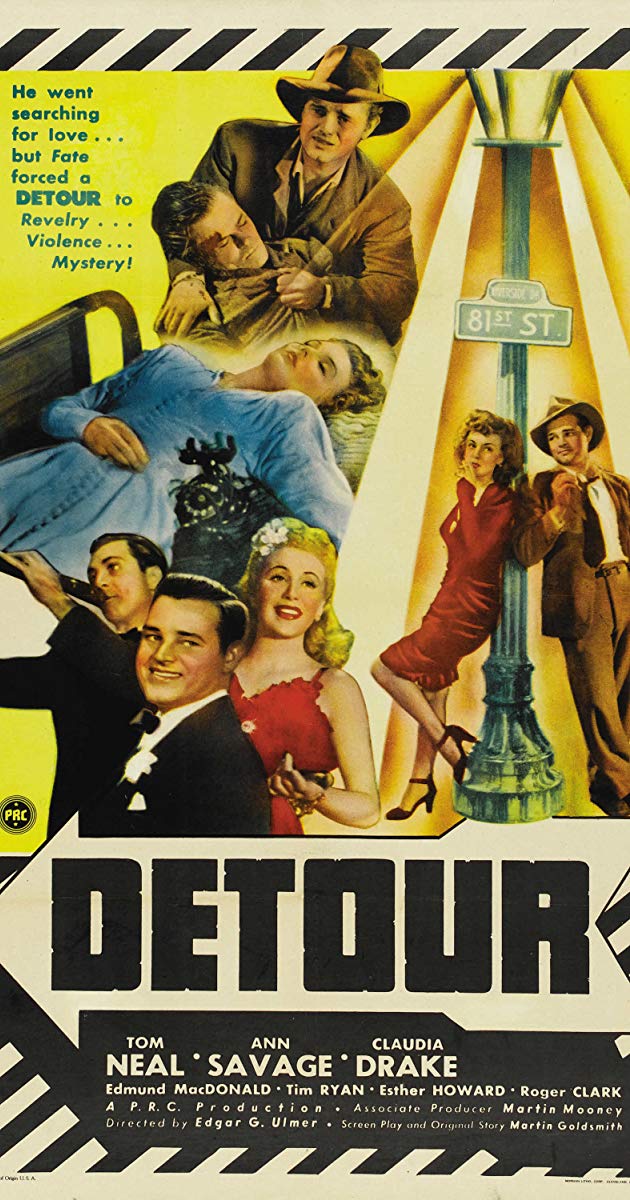 It’s time to take a look at a very old noir film. This one is definitely a movie that you likely haven’t heard of unless you are a really big fan of the genre. It’s pretty obscure and I certainly had not heard of it until after I had seen it. It’s a pretty fun film, although one that will likely cause you to have to suspend some disbelief here. There were a lot of ways for the main guy to get out of his predicament, but ultimately he didn’t choose any of them. That was definitely his big mistake.

The film starts off with Al and Sue getting ready to be married. At least, that’s what Al had in mind, but then Sue lets him know what is really going to happen. She’s heading off to Hollywood to become a famous star and so she’ll se him later. Al isn’t happy about this at all and heads back to his music gig to sulk. That’s when he decides that job or not he will head over to Sue’s place. The problem is that he’s in New York and only has ten dollars on him. He’ll have to travel a long way in order to reach her, but he is determined to hitch hike all the way. The problem is that the guy he is driving with ends up falling asleep after having a lot of pills. Al opens the door which causes the guy to hit his head on a rock and die. Al must now deal with his conscience as he heads to California.

That would already be a reasonably difficult drive for him, but then he notices a lady hitch hiking as well and decides to lend her a hand. The only problem is that she knew the previous owner of the car so now she is blackmailing him to do whatever she wants or she will get the police involved. Can Al satisfy Vera long enough to get to Sue or should he cut his losses and run now? Either way it is about to be one adventure that Al will not be forgetting anytime soon.

Al is the really annoying character here. He complains a lot about how life isn’t fair, but half of the time it’s because he isn’t making the smart calls. Even the first incident where he lets his co-driver die was a little suspect. How did he not see the rock? Also, he knew the guy wasn’t conscious so why would you open the door and then not prepare to catch the guy falling out of it? It’s all a bit iffy there which does reduce your sympathy levels for the guy. He also should have been pretty grateful to the guy for giving him a ride instead of grumbling inwardly the whole time. (Admittedly the guy seemed shady, but they wouldn’t be together for too long)

Then the last straw is when he meets up with Vera. Sure, giving her a ride is nice, but he’s on a deadline and is already mixed up in criminal business. Not letting her in the car is almost the nice thing to do if you think about it since you don’t want her to get messed up in all of this right? Keeping her out is one way to keep her safe. Instead he lets her in and then she starts blackmailing him. Now, he could have just walked out at any time, ditched his car like he was planning or something like that. He could have told her he was stopping at any point except where he was actually going. Where’s the benefit in telling her that he has to get to California?

As far as I’m concerned Al blew it 7 ways to Sunday. Again, there’s just no point in feeling bad for the guy because everything that happened was on him. There are a lot of unfortunate coincidences for him of course like the phone cord with Vera at the end, but beyond that he shouldn’t have even been in this situation that whole time. Al should have cut out early. Meanwhile Vera is the main antagonist here so you’re not really supposed to like her either. She definitely talks tough the whole time and does her best to get in Al’s way. Like he said though, she’s just greedy. Her final plan doesn’t even make a whole lot of sense because there’s no way it would work and she already could have gotten a whole lot of money otherwise. That’s why you end up losing everything when you try for too much.

Meanwhile Sue seems like a decent heroine, but I felt like the film was hinting that she didn’t care for Al all that much. She did leave at the drop of a hat and didn’t even bother calling him. If Al hadn’t called first she may have even forgotten all about him. As a result it makes his journey feel even more futile. I was half expecting him to finally make it only for Sue to tell him that she found someone else. Maybe that would have just been too tragic for Al since by that point he’d already been through the ringer. Still, if the movie had kept going I could see that happening.

The ending definitely works out pretty well though. It’s one of those solid endings that may not work out too well for Al, but after a while something had to end his journey. By this point he was already too far gone. I’ll give him credit for never cheating on Sue though. There was a brief moment where I thought he was going to weaken, but fortunately he did not. That’s a really good thing since it definitely would have crushed his character and probably would have hurt the film a bit as well.

Overall, Detour is a solid film. It’s surprisingly short so the film ends just when you think it’s getting to the second act. The ending is abrupt, but not bad. While there aren’t any real likable characters, I do like the premise/plot quite a bit and since the writing is solid it lets the film succeed even without a good cast. It’s not as if the cast is painful either, they all do well in their roles except for Al. He is maybe just a bit too annoying the whole time and I think the film should have just put him in a tougher situation so there would have been less ways for him to escape. That would have made his complaints a little more valid. Still, valid or not I did enjoy the inner monologue. That’s definitely a noir trope that I’ve always enjoyed. It’s nice to see exactly what the character is thinking the whole time.