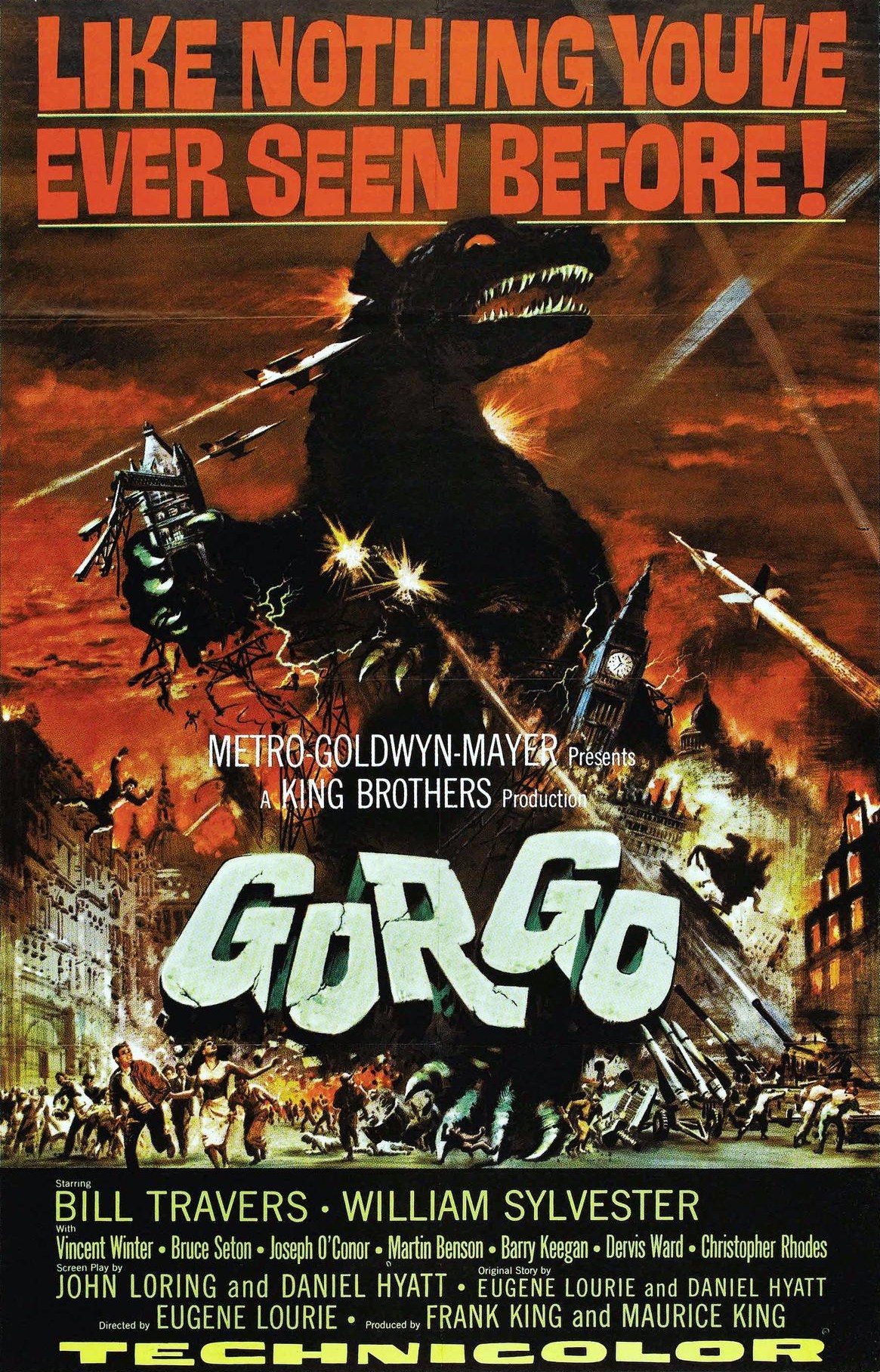 It’s time to take a look at one of those old giant monster films that you may have seen back when you were growing up. This monster also looks a whole lot like Godzilla which was pretty interesting. The red glowing eyes make him appear to b quite sinister and we’ve even got a lot of buildings being squashed. It could be thought of as a Godzilla spinoff of sorts and I’d say that the film holds up pretty well. It doesn’t really make any big mistakes.

The film starts with Joe and Sam crashing on an island where they decide to get some fuel and supplies so they can sail off again. Unfortunately, it won’t be easy as the villagers don’t take kindly to outsiders and won’t talk to them. Joe locates the village leader who also refuses to help, but it turns out that this is because he has a vested interest in keeping people away. Joe and Sam quickly blackmail the guy out of some of his valuables and also decide to take down the famed Gorgo while they’re at it. If they manage to beat him they’ll become rich!

I actually saw this one alongside another Kaiju film which I’ll be reviewing soon. They were both pretty similar although I’d say that this one was a little better as we got more monster action. Sometimes with these films you get worried because the monster doesn’t appear much, but fear not! Gorgo gets a lot of screen time and it felt like he got to show up almost right away. Once he does appear he is here to stay so you can look forward to a whole lot of nice monster carnage.

Now, it’s always a little dicey to see humans preparing to capture a Kaiju. For one thing, it shows that they don’t even remotely fear the monster which is definitely not good for the Kaiju’s confidence. Additionally, it should be pretty hard to take down a monster like this. I’m still a bit worried that in the new Godzilla film we actually might see the government take down Godzilla early on only to release him to fight the others once the danger is near. While Gorgo puts up a good fight, he ultimately isn’t able to stop the humans.

Now, in Gorgo’s defense, he’s a monster so it’s not like he knows strategy or anything like that. There is only so much he can do once the humans have a way past his size. Gorgo has a great design and a cool roar. He’s a fun Kaiju through and through so I wouldn’t call him a pushover despite losing. It would have been nice if he could have outsmarted the humans or something, but this isn’t really that kind of film. Not saying that it can’t happen, but that the scenario was pretty unlikely from the start. There is a cool twist involving Gorgo though as nobody ever said he was the only creature out there.

It’s always nice to see a Kaiju team up and this film actually gives us one. Lets just say that Gorgo knows people in high places. The humans probably should have quit while they were ahead. I feel like the movie never really wants you to root for the humans though because it never even tries to make them all that likable. They just want to get rich, that’s basically all there is to their characters. Take the one scene where the museum guy shows up and asks them to bring Gorgo to him. They pretend to do so in order to keep up appearances, but then they head to the circus instead for the big bucks. You don’t want to trust Joe or Sam, they just want to be rich. Admittedly the museum guy didn’t seem all that smart though. I can’t think of any actual reason why they would want to listen to him. He was going to pay them pocket change, nothing that could really help them and they don’t seem like the scholarly type.

Gorgo is a pretty short film and so even with a basic plot synopsis I’ve already told you a great deal. If you like the classic Kaiju films then I expect you’ll like this one. The writing is on point and Gorgo can hold his own as an antagonist. If there is any weakness here it is in the fact that there aren’t two opposing Kaiju so we don’t get to have a big fight scene between them. That would have been pretty awesome. Still, we did get to see Gorgo lay waste to the city and that’s always a staple of the genre.

Overall, Gorgo is a solid movie. I have nothing bad to say about it. It’s a bit straight forward in that you can probably guess most of the film right away. There aren’t a whole lot of twists and turns although there is one which I thought was executed really well. It’s a shame that Gorgo has basically vanished from the public eye. I feel like he had potential to be one of the next big Kaiju out there. He’d probably need some new abilities to hang with the more modern monsters, but that would be easy enough to accomplish. Ah well, odds are you haven’t seen this film yet so I’d recommend changing that ASAP!