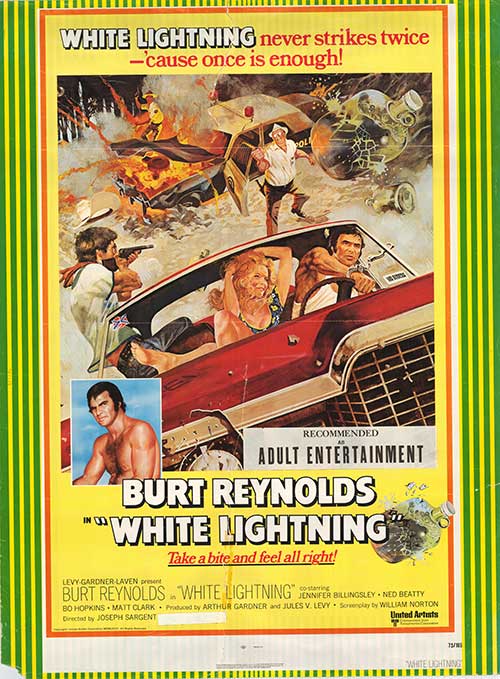 It’s time to look at one of those old films where you wonder who to root for because everyone is pretty corrupt. As you can expect this one wasn’t exactly a winner for me. It’s not an abysmal film or anything like that, but at the same time there isn’t much to it. It’s a pretty simple plot, but no part of it is really well executed. As a result you’ll find yourself feeling like something is missing.

The film starts off with two teens being murdered by the sheriff and some loyal minions. We then cut away to the main character, Gator. He’s currently doing hard time for distributing illegal drinks. Gator then learns that his brother is one of the teens who was murdered so he makes a deal with the cops. He gets to leave jail early but in exchange he’ll find some evidence on the corrupt sheriff so the cops can take him away. The cops like this deal and set him loose. While this mission should be easy, Gator starts to sympathize with the crooks and now he isn’t sure if he should put them away. Still, he’ll take down the Sheriff!

Gator is a really bad main character. Now, you can certainly understand why he wants to get revenge on the sheriff. That’s pretty reasonable, but Gator decides to go about doing this in the worst ways possible. For starters when he gets into town one of the first things he does is to confront the sheriff passive aggressively. By this, I mean that he drives up to the guy and just stares at him. Part of the point of this ordeal is to make his co-driver sweat it out since Gator is basically blackmailing him at this point and the sheriff could shoot them all on sight. What did this act accomplish though? All it did was put Gator on the guy’s and if not for his plot shield that would be it for Gator.

Gator does a lot of nonsensical things like this throughout the film. Then when you thought things couldn’t get worse he decides to cheat on one of the crooks with the guy’s girl. Again….why would he do that? Clearly Gator doesn’t respect the other guy at all. It’s an excuse for some quick romance which ultimately doesn’t add anything to the movie. Beyond Gator, the rest of the characters are all crooks so there are no other heroes. Even the cops who show up from time to time to blow Gator’s cover seem like bad apples. They come in with an attitude and then storm off when Gator talks to them. Nobody’s reasonable here.

Of course Connors (The sheriff) is your average bad guy so he just likes walking around and terrorizing everyone. Some senior citizens try to play dumb when he shows up and he doesn’t spare any mercy for them either. You’re either with Connors or you’re against him. It’s definitely interesting how the cops can’t do anything about him though. The guy doesn’t seem like he covers his tracks all that well and the whole town is pretty up front with their illegal activities. I think if the cops had tried a little harder they should have been able to crack this case without Gator.

There aren’t any nice visuals to distract you with either as the film takes place in an old town. Everything’s pretty grungy so you certainly won’t be seeing any technology running around. The film’s supposed to keep you engaged with Gator’s quest for evidence, but this doesn’t work either since the main character doesn’t want to find any evidence. He just wants to take Connors down for the count and I doubt that arresting him was ever really part of the goal. He’s just lucky that everyone kept on sparing him the whole time instead of shooting on sight. His final plan takes forever and a day to finally get started.

The final car chase is good at least though. We get to see the characters put the pedal to the mettle as they chase each other around for a while. You can probably guess how the chase will end, but it’s still an action scene at last. Before that we do get a full action scenes and even a fight, but this was the car chase that we needed. It’s not enough to save the film of course, but at least this way we don’t have to end on a sour note.

It’s a shame that the cops ignored the town because it seems like it was definitely pretty rough for everyone in it. They probably should have moved away, but of course that is never possible for everyone. At first you think that Connors and his gang are at least nice rulers to those who follow the rules, but based on how they act later on it seems like they also just like to terrorize people for kicks. They get away with a whole lot and even by the end of the film you wonder how much has really changed. Even without the head honcho we know that a bunch of other people were also corrupt so hopefully those guys were taken down too.

Overall, White Lightning is definitely a film where I’d recommend skipping it. The character cast is weak and the film does tend to drag on a bit. Not having a good main character definitely hurt this movie right from the start and it only gets weaker from there. Even the teens who died at the beginning don’t sound like they were all that smart. When you live in a town controlled by the villains it probably isn’t the best time to exercise your right to free speech. If you want to watch a grim tale of tragedy and revenge then this is the one for you. If you want a movie with a better main character then check out the original Mission Impossible instead.