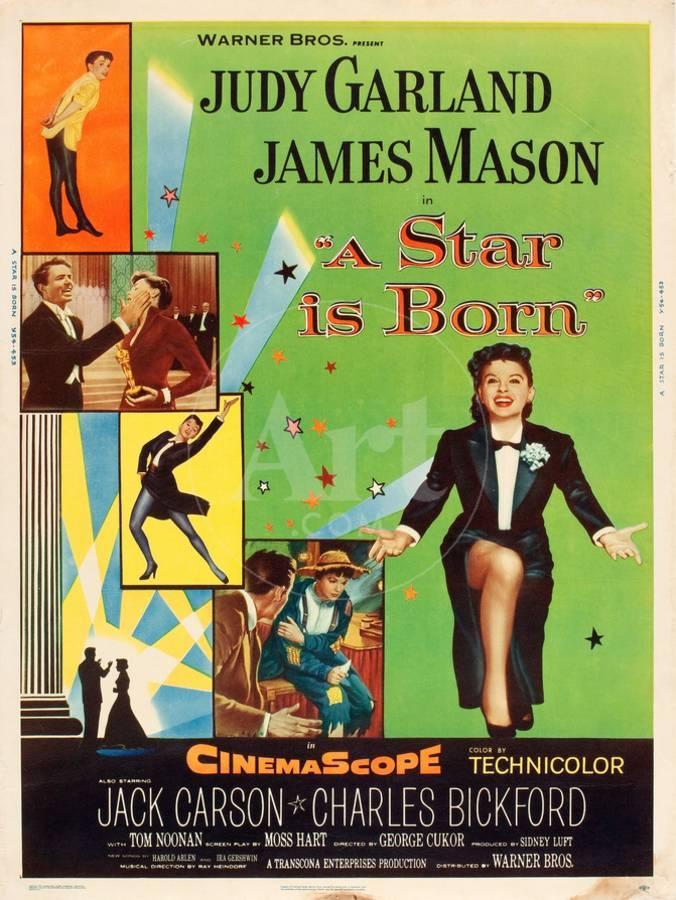 It’s time to look at the second adaption of A Star is Born. The film plays it pretty straight compared to the first movie so there aren’t a lot of changes. Mainly it’s the heroine’s backstory that has been altered for this one. In the first film she had a modest upbringing and wanted to follow her dreams of being a movie star. In this one she is already a pretty talented singer but is then given the opportunity to be a star thanks to being noticed by Norman Maine. She can’t turn down an opportunity like that right?

The basic plot revolves around both Norman and Esther. Norman used to be a very big star, but he became an alcoholic and ever since then his talents have suffered. Nobody wants to work with him at this point and even though he is under contract that may not be the case for long. One night he spots Esther and decides that she is someone who should be a part of Hollywood. He gets her the audition and her talents take her the rest of the way. They get married, but the problem is that Esther’s fame quickly eclipses Norman and his ego isn’t ready for this. He starts going back into his spiral of doom and threatens to destroy both of their careers once and for all.

This movie does try to make Norman a little less antagonistic although his being drunk is a crucial part of the movie. In the original he broke Esther’s Oscar statue while at least here is showed some restraint there. Still, he’s not a character that you are likely going to root for. He is simply too far gone and from the start he gets hurt too quickly when people don’t recognize him. Even in the first minutes of the film before Esther is introduced he is already getting himself into a lot of trouble. As the judge says later on, he got a lot of advantages that nobody else had and yet he squandered them all. Even at the end of the film he takes the easy way out. Sure, he was doing it for Esther’s sake so he wouldn’t sabotage her anymore, but at the same time that’s also saying that he couldn’t stop his bad habits.

As for Esther, she’s definitely a solid character. I’d say that she was more likable here than in the first film as well. As she was already a singer she was well equipped for Hollywood from the start. She never felt out of her depth or anything like that and dived right into the action. Even once the difficulties with Norman started to arise she always put it behind her and acted as always. Once it became obvious that her success wasn’t helping matters she was willing to throw it all away to help him. Esther’s definitely a selfless heroine and one that is easy to root for.

Libby serves as one of the antagonists here to an extent. He may be Norman’s agent, but he definitely doesn’t like the guy. He waits for the day it all catches up to Norman and seems to be bitter about all the times Norman threw him through windows or caused a general mess of things. He gloats a lot by the end. He’s a pretty fun character and definitely made sure Norman did not recover. Meanwhile Niles is a guy from Hollywood who actually was looking out for Norman. He did his best all things considered. While he was not quite able to help him in the end you can’t say that he didn’t try.

Then you have Danny who is probably in the most tragic situation. He helped Esther get a career but was then thrown away once she had this gig. He was always trying to help her, but got friend zoned in favor of Norman. Still, he never stopped being her friend so that was definitely nice of him. Even by the end he is the one who comes in with the speech to finally help her get a hold of the situation.

As for the musical aspect of the film, it was okay although I can’t really say that the songs were my thing. They sounded well enough but the beats weren’t fast enough and the singers were only okay. You’re not going to find anyone at the level of “Let It Go” here. Not every film needs to have a standout number like that though. The scene of Esther running about the house showing her latest number to Norman also was maybe a tad too long. The musical did show restraint with the number of songs though, at times you may not have even known this was a musical to be honest. Songs are featured, but it’s not quite as constant as something like High School Musical. Of course, it helps that this movie is about 3 hours so you have time for both the songs and the plot.

The writing is pretty solid as well. The characters are pretty quick witted. Norman’s sudden personality shifts from being aggressive to normal are very rapid which works well for how his character went. The romance between him and Esther is pretty weak though. It’s hard to see it escalating so quickly considering that he almost ruined her dancing number and then comes across as very over the top. She goes from treating him as a nuisance right away to quickly becoming more than friends. It all happens so quickly and I dare say that the original one made more sense. At least there you could also say that it was part gratitude since he helped her from nearly being penniless to being a star. Here? He forgot about her for several weeks after convincing her to quit her job. She shouldn’t be all that grateful after such a turn of events.

Overall, A Star is Born has its solid moments, but still does suffer from a pretty weak ending. It’s definitely not a very satisfactory way to end the movie as in a sense Norman lost. He proved everyone else right and while Esther’s legacy hasn’t been tarnished, it would have been good for both of them to have gotten their win. Esther ensured that Norman wouldn’t be forgotten with her final line in the film so as always she did a good job of making the best of the situation. As the movie is also very long there isn’t a whole lot of replay value here, but it’s not a bad movie. It’s good for a one time watch at least and as long as you can get around the fact that you can’t root for Norman then I’d recommend checking it out.