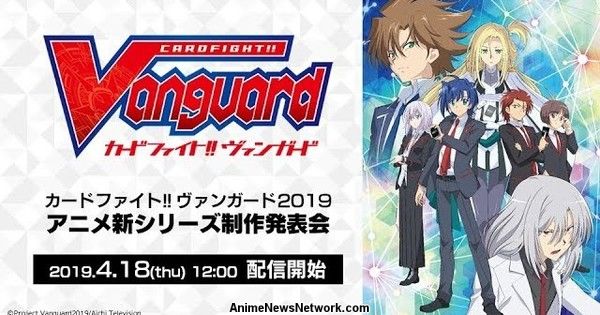 Time for another Cardfight review! This may seem pretty soon compared to usual, but that’s because this was more of a miniseries than a full fledged one. It deals with the fallout from the recent reboot season. Kouji must face his demons and Aichi still intends to bring his club a world championship as soon as possible. At 14 episodes the series has to move on pretty quick but still makes for a good watch. It’s probably the most standard of the series and by default is the weakest entry in the franchise. There’s only so much you can do in 14 episodes when the others are all around 30-50 episodes (Some are at 60+) but it does what it can.

The show picks up where the last one left off. The universe has been reset after Kouji was defeated. Everyone has seemingly lost their memories of the old timeline. As a result there are a few things that don’t add up. One is that Aichi’s cardfight club no longer has the right amount of members so the student council decides to shut them down. Aichi and his team defeat them to avert this dilemma and as part of the deal even get the council to aid them in joining the big cardfight tournament that is about to start. Aichi aims to learn why the club is seemingly missing someone despite having no knowledge of this. Winning the tournament might somehow give them clues on how to do that.

They aren’t the only team to enter the Koshien though. Meanwhile you have Ren’s team and they’ve recruited a powerful ally in Kouji. Kouji no longer wants to erase Vanguard from the world, but as a result he is frozen with fear whenever he duels someone. He knows that if he wins he will end up destroying the opponent’s will to play so he must find a way around that if it’s even possible. His plot is almost as big a focus as Aichi’s as he tries to find a new path for himself. Meanwhile Kai is also still weakened from when his spirit was destroyed and along with the rest of the emptied souls must try to regain his joy for the game.

While the main plot of the season is technically about the tournament, it really doesn’t have a whole lot of importance. It’s here as a plot device to get all of the characters together to get through their difficulties but ultimately that’s about it. Unfortunately someone must have told the animators/writers this because it gets the shaft. The tournament doesn’t start until the last few episodes and as a result just about every fight is handled off screen. Sure, you see them on screen briefly for the trash talk and posturing but then most of the duel just goes by in a flash. It almost would have been better to not have had the tournament at all. It all feels very half hearted like the show is just going through the motions.

I suppose a rushed tournament is still better than not having any duels…but there’s more the show could have done if it cut the tournament out. The best episodes here are mainly the ones about Kouji as he struggles with his inner demons. It continues to show why he is the best character in this post reboot world as he is trying very hard to change himself. It’s a pretty painful process compared to everyone else who just has to win a duel. Trying to lose is always a tough thing to do because it also hurts your reputation. I still consider Kouji to be the strongest duelist here even with the nerf as I don’t find his new deck to be quite as impressive.

Although it initially seemed like he was the only one who kept all his memories while everyone else had to start remembering little flashes, the last episode seems to contradict this. Perhaps the universe change is slowly going to get everyone and Psyqualia only prevents this for a time. Ideally I’d like everyone to remember the old days as I never like for it to be permanently forgotten. The characters all get happy endings this time around though so that’s an improvement over the last adaption of this arc. Kourin gets her proper closure and is once again a true part of the team. She’s definitely been a fun character and it’ll be nice to have her back on the cast for a future season if we go back to these guys someday.

Nakagami is probably the biggest of the new characters. He’s got a lot of potential to be sure. At times he is played off purely as a comic relief character and I have a gut feeling that this will always be the case, but there’s always the chance he will be played seriously. If the show ever does go down that route it’ll be cool. I like the concept of his demon arm and he actually seems like a pretty decent duelist. His ramblings are fun and his duel theme is great. All in all I have to say that he is just a great character and struck all of the right notes.

The rest of the student council are decent, but they won’t leave much of an impact on you. They’ve each got their character quirks, but that’s about it. I like the President’s global gimmick as he is always yelling about that. Aichi’s club is always around, but I wouldn’t say that any of them have an especially big role. Naoki does want his revenge on Kouji since ironically one of his only memories is of the days when Kouji was a villain and insulted Aichi. As a result he wants revenge during the big tournament which is his perfect opportunity to do so.

Kai’s episodes are not quite as thrilling as Kouji’s but he also does get a pair of episodes where he duels Mamoru which also works as some setup for Cardfight G. It’s just so weird to see Kai acting so weak. It doesn’t feel right since he’s always been the champ above everyone else. I dare say that he’s taken the biggest hit from his old stature in this reboot series. He is getting to his old level though so I like to think that by the next series he will be back to normal. At least he ultimately did get his hits in though. At this point we definitely need another big season with more G characters. I feel like they’re all close enough in age right now where we could get some good fights between them without the original cast being as old as they were in the original.

As always the animation is pretty sharp here. I’ve always liked the style and especially since the show isn’t very action based the animators can easily just focus on making sure that the character models stay even at all times. The colors are bright and the whole thing just works quite well. In terms of soundtrack it’s all tunes from the last season and they are just as good as they used to be. Kouji still has the best theme but the others all share solid themes as well. The action tunes go quite well with the duels. 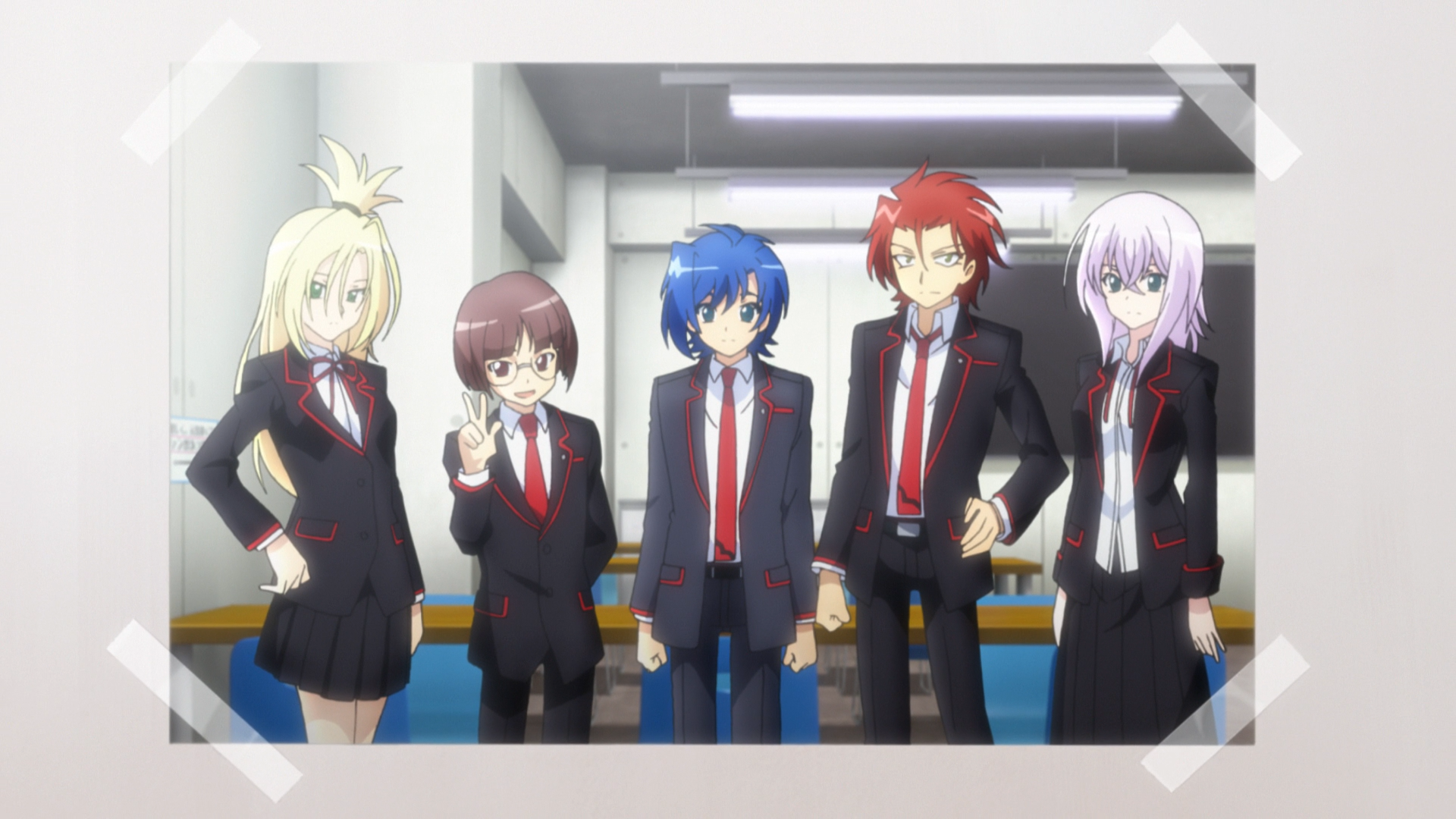 I know there are some who prefer the days of Cardfight before the stakes became planetary level. Back in the old episodes it was more about having fun and getting better with your friends so I can understand that. However, I think it’s the natural progression of every series to get higher and higher stakes so my favorite seasons are still the ones like that such as Link Joker. Still, this is a nice refresher season I suppose which is the best way to put it. As I mentioned earlier it’s still quite solid, it’s just “average” compared to the others which would absolutely blow you away.

Overall, This was a good aftermath season. I can see why it would make sense to just include this one with the last season. Ultimately it’s not like it’s trying to tell a brand new story just yet. The next season has already started in Japan though so I’ll be watching it pretty soon. I’m not sure how long that one’s going to be, but I expect it’ll be at least 26 episodes if not 40 so the review for that will likely take a lot longer. If you’re been watching the Cardfight shows then you definitely need to check these out. If this would be your first Cardfight title then I definitely recommend watching the previous season first as you wouldn’t really appreciate the aftermath without actually seeing the events that led up to it.