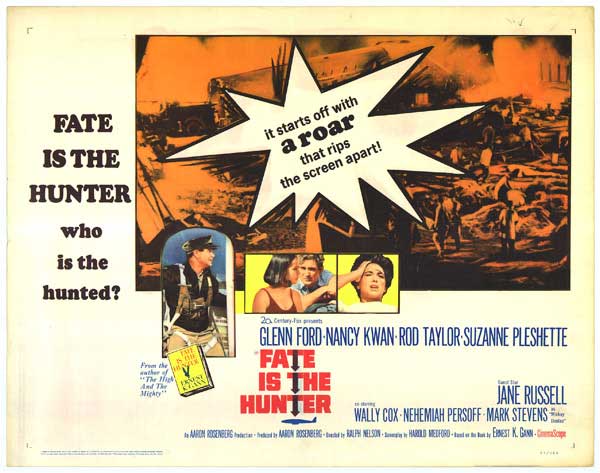 It’s time to look at a film dealing with airplanes and a lot of tricky situations. It also throws in a court case for the second half which was definitely fun. It’s a movie that is admittedly pretty slow for the first half, but will keep you engaged enough to see it through to the end. The film doesn’t really do anything wrong it just isn’t very exciting. You have to be ready for a slow burner but as long as you are then there really won’t be a problem here.

So Jack was known as a great pilot but one day he crashes the plane and dies along with a lot of people. He was seen at a bar the day before so everyone thinks he got drunk and that’s why he crashed. Sam doesn’t believe this was the case, but getting proof will be tough. The court case is coming up and in order to clear Jack’s name Sam will need to revisit all of his old memories and meet up with Jack’s old gang. It won’t be easy, but nothing worth doing ever is. Sam knows he is going to have to try really hard to find the truth, but he won’t give up until he does!

The film does a lot of jumping between the present and the past so we can see Jack. After all since he’s dead in the present it’s not like he could actually show up in the main timeline right? Even the flashbacks are cut up as you see different bits and pieces as Sam meets the others. Jack seems like a nice guy from what we see even if he’s always running around. He’s got so many friends that he doesn’t seem to have time for any individual one for too long before dashing off with another. Still, he’s always around when you need him and this strengthens Sam’s resolve.

Sam goes down a bit of a dicey alley after meeting Sally though. She explains to him the concept of fate and how maybe this is just how things were meant to be. Sam is skeptical at first, but slowly starts to come around. This is not good for him for a few reasons. I’ll get to those in a minute. Before that, I’ll just say that Sally was a nice character otherwise. She was definitely very helpful in the investigation. Without her Sam would have had a tough time finding anyone else. Sam’s also not a bad character even if he doesn’t think things through nearly as well as he should have. Lets just say that the whole fate angle plays about as well in court as you would expect.

All right, lets talk about this whole fate thing. The first reason why Sam shouldn’t have used it is that the argument sounds so terrible in court. Sam effectively says that maybe it was fate for Jack to crash and for everyone to die. He goes as far as to imply that it was actually a good thing in that case as all the lives on the plane were meant to end. I don’t know about you, but if I lost family on that plane and someone said that in defense I would definitely be voting guilty and that company would really be in trouble. Sam seems a little surprised at the backlash but he really shouldn’t be. It’s a terrible argument to make.

The second reason why I never bought into fate is that it can’t be wrong. Put it this way, if you buy into fate as a concept then it can explain any and everything. If you lose at something it was fate. If you make a mistake then you can just say it was fate. Nothing ultimately matters because fate controls everything and you can’t escape it. At the same time, you never know what will be fate until it happens so it’s basically a loop. I see little point in subscribing to fate in that case since whether or not I believe in it, if it’s real it’ll happen anyway. So it’s all just circular logic that will drive Sam into a deeper and deeper hole in the court. He really should have avoided that.

That’s my thoughts on that at the very least. The writing is good here and the pacing is solid. There’s no sense of danger or anything which is just why the film has a weird vibe. I’ve certainly seen films with no such stakes, but the tone here just feels like there should be. At most the film tries to throw some in at the very end when the characters try to recreate the scenario. I don’t think the scene is quite as exciting as the film seems to think it is though. Points for effort of course, but the court scene is still the best part of the film. You just can’t go wrong with a court scene. That’s simply how it’s always been and I don’t expect that will be changing anytime soon.

Now there is some irony at the end of the film. As a quick disclaimer, ultimately the reason why Jack went into the bar was to buy some drinks for a friend of his. Jack didn’t actually have any so he wasn’t under the influence. The crash was because of something else….but it was still his fault. See, he got a coffee from the attendant and then he put it down on the controls while doing a turn. The cup fell and the coffee spilled into the engine which caused it to malfunction. So, in a way it was still his careless that caused the crash. Of course the planes should be made a little more carefully than that, but the first rule of any electronic device is that you are not to have any liquids nearby. That’s why you should have soda on a plane because you drink it right away and that’s that. For a coffee that has to be cooled first it’s simply not practical. So, I found a little irony there, but I suppose it might still be a little bit of a stretch to totally blame Jack. It was a 1 in a million kind of chance that led to the crash, but I think when they present these findings the people still won’t be all that thrilled.

Overall, This is an interesting film just not an engaging one. I think you will want to stick around for the ending once you start and see what happens. The writing is solid and the film has good fundamentals so there’s nothing bad to say about the film. I think it probably should have just added more time to the search but with the added bonus of a rival or some doubter to get in everyone’s way. This film lacks banter because there are no real antagonists. The best scenes in the film are when the company shows up to get in Sam’s way and offer their own input. That kind of thing always helps a film if you ask me. Regardless, it’s a fairly unique title that’s worth giving a look.

3 thoughts on “Fate is the Hunter Review”