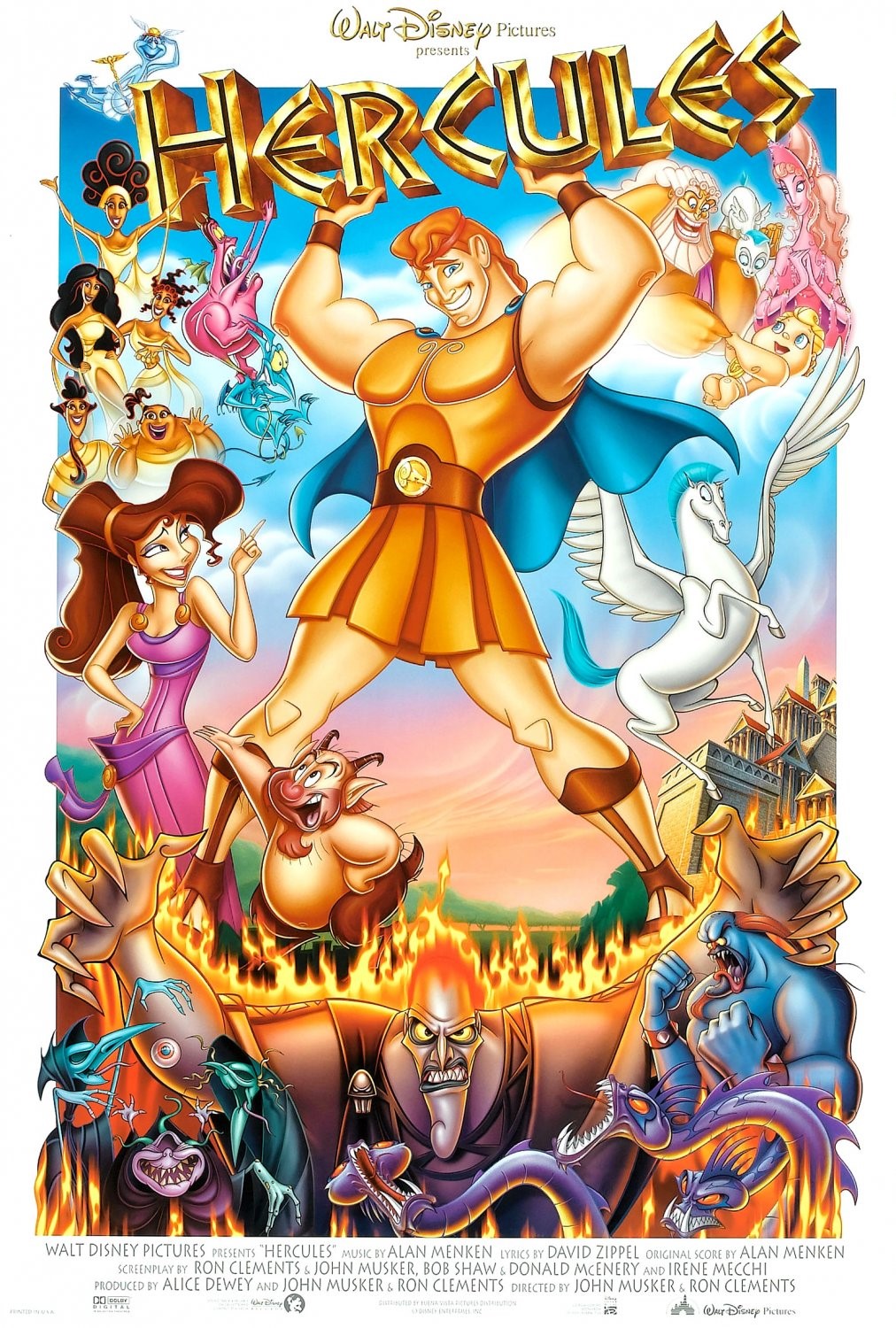 It’s time to watch another big Disney classic. This time we are thrown into the world of myths and heroes with Hercules. This is definitely one of the more action packed titles and it holds up quite well to this day. While the songs aren’t quite as memorable as some of the other films, we do get one of the best Disney villains in Hades. The guy has a lot of charisma and steals all of the scenes he is in.

The film starts off with Hercules being born and Zeus has a big party to celebrate this. He invites all of the other gods of course and it’s a perfect day. This changes when Hades shows up and hatches a plan to prevent this. He turns Hercules into a mere mortal and Zeus is forced to banish him to Earth. The only way for Zeus to re-obtain his godhood is to become a true hero by performing many feats. It’s not as easy as saving people though, he has to do something truly heroic for noble reasons. Can Hercules become a god again before Hades conquers both of the worlds.

Lets quickly just talk about some things here that are a bit iffy, but in character when you look at the myths. One thing is how Zeus can’t let Hercules stay once he is mortal. Zeus is the highest ranked god in this universe right? Why does he have to obey a law when he is the one making them? Most people who create laws rarely end up following them and Zeus is always shown to be a pretty selfish guy. I guess this one’s just too heroic for that, but it’s still a bit iffy. He’s also super oblivious like how he didn’t notice that Hades tried to stab baby Hercules. How he didn’t realize that Hades would be a bit upset after being banished to the Underworld is also interesting. I do like Zeus a lot to be fair. He’s just a lot of fun which is rare for most portrayals of his character. That being said, he’s not very smart of strong. In the climax he looks pretty terrible to be honest.

I also have to question how there is a potion that can take away your godhood so easily. Can’t Hades just trick the other gods into drinking it too and then he would rule the world? If the film mentioned that it only worked because Hercules is half human then I’ll have to retract this issue. Both of these are extremely minor observations that don’t effect my enjoyment of the film or the score, but were worth noting. I was definitely thinking about this as I watched the film.

Hercules is definitely a good lead. He reminds me of early Superman when he would work on the farm using his super abilities. Hercules doesn’t have a secret identity to worry about so he just works hard and does his best at all times. The townspeople are annoyed by him which is unfortunate. While Hercules can be a bit sloppy, he really seems like an earnest chap. He does fall for Megara pretty easily and doesn’t listen to Phil as much as he should, but all in all Hercules can easily hold his own film. He already seems more powerful than most of the gods which is also quite impressive.

Phil was always fun in the Kingdom Heart games and is good here as well. He definitely flirts a lot though so I have to doubt his concentration as a coach, but once he actually gets his hat on straight then he’s ready to work. He probably could have done a better job of explaining to Hercules what was up though. As for Megara, she’s a tough heroine. Megara is the kind of character who always tries to get the last word in and is pretty jaded on romance in general. This does result in what I would say was a pretty quick 180 with Hercules but I suppose he is basically a god so I imagine he was impressive in person. I do think it would have been a good dynamic to have had them stay friends though.

As mentioned earlier Hades is definitely the big character here. He is proactive compared to the rest of the gods and characters. While they sit back and eat he is always planning. His plan was pretty much fool proof and while his lackeys aren’t too helpful (They don’t really add to the film and could have been cut out) Hades is prepared for that as well. He probably should have just hurried a little more near the end so Hercules wouldn’t arrive in time. His abilities aren’t tough enough to actually fight head-on with Hercules and Zeus, but it would have been interesting to have seen him fight a little more. Most of the gods lost effortlessly to the Titans though so those guys got quite a lot of hype.

I did like that in the ending Hercules quickly went to the underworld to save Megara. In any story where the underworld is a place you can visit it feels mandatory that the characters should head on over. Hercules was able to win on his turf so he should at least believe that he can win here as well. That’s the level of determination you need in order to be a good main character. What would have made the ending perfect would have been if Zeus said that Hercules and Megara could both come to their world and they could just go back between Earth and the realm of the gods whenever they pleased. It’s the last the gods could do since they’d be dead otherwise.

The scene with Hades talking to the fates are interesting dialogue-wise but the whole eyeball thing was more gross than creepy. I could have gone without that scene to be honest. As for the songs, we do get some catchy songs from the fates, but none of them quite have the same heart that you would see in Aladdin or Frozen. I already can’t say that I remember the lyrics to any of the songs. They have that classic Disney auto tune (Not auto tune, but a voice modification thing that makes them all sound the same) effect which works well and I’m glad they had these songs as opposed to not having any, but it’s not the strength of the film.

The writing is really where the film shines and the pacing is tight. Then we’ve got the solid animation which is as sharp and colorful as you’ll remember. It holds up to any and all of the other Disney films. We also get some fun fight scenes which is great like Hercules vs the Titan or the first bull creature. I was surprised that Hercules didn’t win his first fight with more ease though. Even if he didn’t know how to fight yet, I figured that his super strength would make any fight an easy win. I guess it’s good that he’s not too OP yet, but then it does make you wonder how strong the gods are. It is reasonable to say that the humans could possibly win a fight with them in a few hundred years once they got gun powder.

Overall, Hercules is a very good movie. It’s definitely the definitive version of the story and I’d be down with Disney making a sequel someday. They’ve been doing a lot of remakes lately but not a bunch of sequels. A crossover of all their 90s classics would also be a blast. That’d be very ambitious, but it would make for an excellent watch. I was long overdue to watch this film and it lived up to the wait. If you haven’t seen this movie yet then I recommend changing that and watching it as soon as possible.