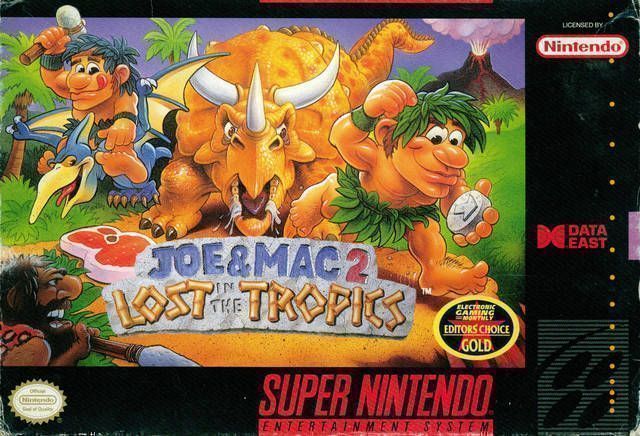 It’s time to look at an old SNES game. This is one of those titles that I definitely had not heard of before and is certainly underrated. The game has quality platforming mechanics that can hold their own with the other big side scrollers. It’s really surprising that the game didn’t hit it big.

The plot of the game is that someone has kidnapped the legendary crown from the village. In order to get to him we will need to defeat the 7 dragons and gather all the gems so that we can create Rainbow Road.  This won’t be a cakewalk and the mastermind behind these attacks should not be messed with. That being said, our hero is ready and eager for the challenge.

The gameplay is pretty simple. Your goal is to make it to the end of each level where there is a boss waiting for you. You can swing your club to dispatch enemies and you can swing it forward or up. You can also pick up meet that the enemies drop which will replenish your health and also give you a special ability at times. One lets you shoot bullet seeds which is very handy thanks to the range. The best weapon in the game are the twin axes though. When you find these in a level you are basically invincible since you can shoot two energy blasts that cover a very long distance. You can also swallow water but that is only useful for one jump in the whole game where you have to put out a fire log. It’s pretty impressive that the game added a whole mechanic for one scene.

This is a difficult game though so you will really need those weapons. Touching anything will hurt you and you don’t have a whole lot of health. 5 hits and that’s it. The minions run and jump out of nowhere so it can be very difficult to react to them on time. Then the bosses have tough attack patterns that they mix up quite a bit in order to claim the edge. The toughest one is definitely the dinosaur that shoots out a bunch of rocks and energy blasts at the same time. I couldn’t figure out a way to dodge the rocks so you’ll be banking in RNG a bit here. Just rush in and hit the dinosaur as much as possible since a drawn out fight is the last thing you want.

You will want to take their fighting habits to heart since you will be fighting a boss rush of every dinosaur in the game in the final level. That would be absolutely brutal on the original console without the save states and rewind feature. Even with them you’ll have a bit of a tough time, but you will naturally learn the movements the more you battle them. By the end the final boss doesn’t even feel all that tough in comparison. His second form is easier than the first one and I’m guessing that’s because it would feel pretty impossible by the end if the second form was even stronger than the first one. This way you get to sort of wind down as you approach the ending.

The graphics definitely look pretty good and have aged really well. This is the kind of sidescroller that I could see doing really well nowadays if it ever got a sequel. There’s just a good world and setting that this game has made which will really serve it well. Naturally the story isn’t too deep at this point since this was such an older game but they could definitely flesh it out with a modern remake. There’s just a lot of possibilities here for sure.

In terms of replay value there naturally isn’t a whole lot. Once you’ve beaten the game that’s it. You don’t even get to go back to the main menu at that point because the game is 100% done. It’ll last you for about an hour or so and then you’ll be all done. Considering that the game is free if you already have the online service then that really isn’t half bad. If anything it’s a steal. The SNES Online really feels worlds apart from the NES titles as these are full fledged games in their own right. Joe & Mac 2 has definitely earned that respect.

Overall, This is a fun game. It’s really got all of the elements that you would expect in such a solid title. The gameplay is rock solid and the game actually has a structure. You’ve got an ongoing plot as you try to grab all of the gems and are rewarded with a nice payoff through the ending. The game is not all that linear so you can choose to get whichever gems you want in any order. It’s like a Mega Man game in that way. You can also spend your money at the local shops to fix up your home and buy meat. I don’t really get what half of the items over there do though. Some like the Melon just makes it feel like you’re wasting money for no real reason. I’m sure the items all have a purpose but the game can be rather vague on that front. Well, it’ll be tough for the next SNES game to pass this one but never count one out.