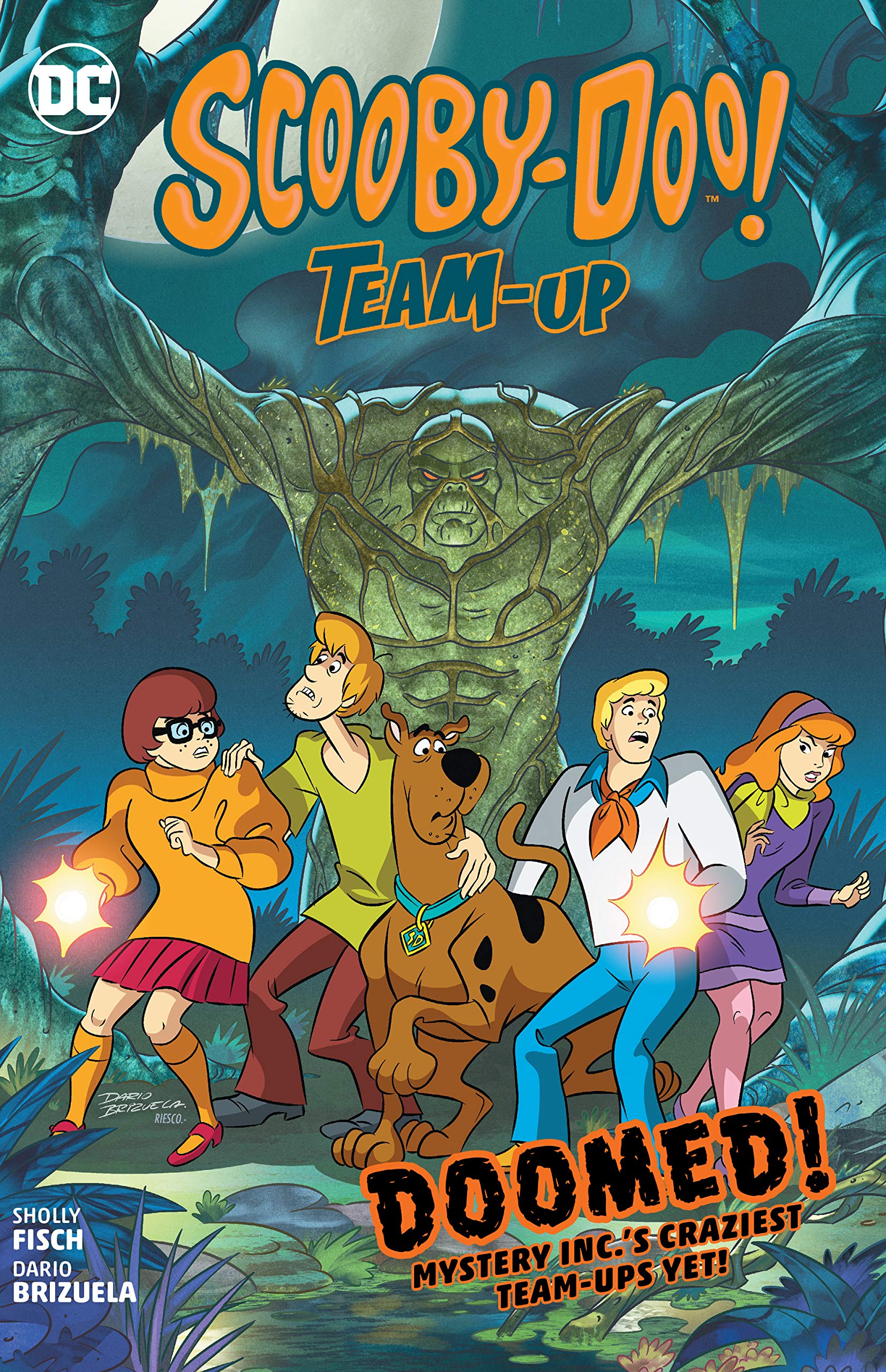 Time for some more team ups with the good ole Mystery Inc and some more DC heroes. The series has done a good job of grabbing so many DC characters. We’re 7 volumes in and still seeing new fighters. While you may be skeptical as to how the Mystery Inc will actually be of help, typically they are really here as distractions. Think of them as extra shields to buy the heroes an extra second. Usually that’s all the extra time that the hero needs.

One of the stories has the heroes head to the swamp where they meet up with another one of Shaggy’s relatives. They’re here to look into the Voodoo Woman so they can put the swamp at ease. They have to stop her meddling, but unfortunately she already has a whole bunch of zombies at her beck and call. The only being who can really help them out of this dilemma is the legendary Swamp Thing, but will he really be able to defend against such a powerful villain? Interestingly this comic also squeezes in Solomon Grundy towards the end although he is definitely way out of his league this time. Typically I would actually pick him to win, but in this comic Swamp Thing had the edge from start to finish. There was never any doubt as to how this would end.

It’s a pretty nice comic. It’s always good to see Swamp Thing getting some time to shine after all. The comic also poked fun as how the heroes have also defeated Swampthing in another issue. The space in between the words is the key to really knowing who you are dealing with. This is an example of an issue where the Scooby gang doesn’t really get to do much though. Mostly they just run away from the Voodoo Woman a lot or they’re in awe of how strong Swamp Thing is.

Another comic features the Doom Patrol and this was actually my favorite issue of the bunch. The team is bickering as usual, but the strange part is there enemy seems to keep changing form. At one point a whole group of enemies show up, but they all seem to be ghosts. This is a case for the Scooby Doo gang. There’s definitely a trick involved and they’ll have to figure it out fast. The Doom Patrol was always a fun X-Men sort of group but with a lot more in-fighting. I also like how their leader has a lot of weapons ready inside of his wheelchair. Honestly it’s just the smart thing to do when you’re the leader of a super hero team. This way at least you can defend yourself right? This story has so much action it feels like a real Doom Patrol story with the Scooby Doo gang just guest starring in it. It’s handled really well.

Another story featured Supergirl as she called the gang in to help her deal with the ghosts of her parents. She was quite serious too as she even told them her secret identity which was a bold move. The heroes know something is wrong because the parents keep calling her Supergirl rather than Kara or her kryptonian name. That seems like a scam and of course the heroes are right. I would have liked a more powerful Supergirl villain to have been the main villain here, but it does help reinforce the mystery element of the issue. Supergirl could have looked better here as she spends most of the issue getting outsmarted, but she did call in the crew to handle the mysteries so in a way she won the fight before it even started.

There’s a subplot with her cat and Scooby not getting along, but it doesn’t hold up as well as the main one. The cat is just annoying and Scooby really isn’t much better so they both end up being guilty in this one. The whole temporary superpowers for a few minutes thing is pretty fun even if the time range isn’t nearly long enough to be all that useful. By the time you are really getting into a rhythm you would be taken down for the count.

In our next adventure we’ve got the return of the Blue Falcon. The issue here is that he has been acting awfully shady the last few days. His dog sidekick asks the Mystery Inc for help on figuring out just what is going wrong. Unfortunately they all fall for one of those classic net traps and find out that the real Blue Falcon was actually taken down by one of his old cronies who is now impersonating him. Can the heroes stop this guy or is it already too late? It goes without saying that Blue Falcon doesn’t look good here. He went down off screen and apparently he is so nondescript that someone can easily change places with him and nobody can tell the difference. He’s clearly got a ways to go before he is known as one of the big leaguers. It’s a good comic, but a little less eventful than some of the others. It was nice to see the characters constantly taking shots at him by saying that he was copying Batman though.

My least favorite issue was the one with all of the apes. Basically it’s an ensemble cast with a bunch of DC monkey themed characters. It’s a pretty impressive bunch as they even got some I didn’t recognize like the guy in a cage who can switch minds with an ape. What hurts this one is that I don’t even like a lot of them. Gorilla Grodd and Detective Chimp just aren’t my cup of tea. I also have to question why the Mystery Inc was really called in. They try explaining that it’s because one of the gorillas is a vampire Nazi so that’s like a ghost, but is it really? If I were the mystery inc I would still be questioning that. This is way out of their power levels. Still a good issue, but it wasn’t quite as strong as the others. Also the ending doesn’t really make sense.

So as I mentioned the main guy can switch minds with a gorilla and it is through his amulet/ring of sorts. He somehow manages to switch places with Titano at one point, but how? Unless his powers work differently than how I had interpreted them he would have needed to get the ring on the other ape and I just don’t see how he could have had time to do that. It would have been too difficult and he was out of range. That part just stuck out at me and I read it twice, but still couldn’t put that chain of events together.

In the next story the heroes are confronted with a bunch of powerful spirits. Dr. Fate sends them to the past so the heroes can find a way to deal with them, but it means that they will have to survive some world war II adventures as they try to find the answers. This means that the old school version of the Justice League shows up. Green Lantern’s weakness to wood is still a huge liability to deal with but the others manage to pick up the slack. The solution to stopping the demons ends up being incredibly simple, but I suppose that’s why it was hard to note it. This was definitely one of the strongest stories. It was nice seeing all of the heroes and everyone got to contribute in some way or form.

Finally we have a team up with Penelope Pitstop. I’m not familiar with her character but her gimmick seems to be that she gets kidnapped a lot. As a result there are a bunch of mini mobsters who look after her as well as a real estate agent of sorts. The Mystery Inc are called in to help her as well but with this many bodyguards nobody is sure who should take point so there is a lot of in-fighting. The Mystery Inc needs to figure out who is planning to kidnap Penelope before it is too late. The clock is ticking.

This is definitely the most mystery focused out of all the stories and I dare say that the Mystery Inc is at their best here. They get to do some old fashioned detective work here and they aren’t out shadowed by the other heroes. This time they can actually hold their own since they are in their own element and it ends up working out quite well for them. Penelope is definitely the most obscure of the characters we’ve seen, but in some ways that helps with the mystery since I wasn’t as familiar with her supporting cast. I definitely won’t be forgetting this adventure anytime soon though so it’ll be fun to see if she appears somewhere else in the near future.

As always the artwork here is pretty solid. The characters all look like themselves and the fights can take themselves seriously when necessary. The colors pop out and it’s clear that the artist was putting a lot of effort into the drawings. It just looks really good and it manages to be colorful/vibrant while keeping the serious tone for the heroes’ side of things. I’ve definitely got to give the comic a thumbs up here.

Overall, Scooby Doo Team Up Volume 7 is yet another strong installment in the series. By this point you should definitely know if you’ll like it or not. It’s a steady formula that the series has going on in these adventures and it’s one that works quite well. The Mystery Inc are here for the humor as they get chased and one upped by all of the villains while the DC Heroes come in with a lot of confidence and save the day. That’s exactly how it should be and this works out quite well. The art is good as always so these volumes just go by in a flash. I look forward to seeing who the heroes get to team up with next.