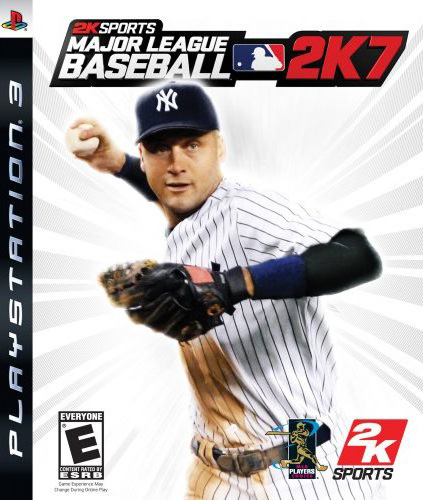 It’s time for another Baseball game! This one could actually be the last one I review for a while which is pretty crazy. I have two more MLB games, but they haven’t been working. If they don’t start working soon then it’ll be time to cut my losses with them. Baseball is one of the few series where I actually tend to prefer 2K to the main line games. 2K7 is no exception and actually has the best batting mechanics I’ve seen yet. If you really like Baseball then this is the title for you. It’s still not really my sport when it comes to video games because I feel like there is too much RNG, but at least now I can hit the ball back.

There are a lot of modes as always here but the one you will want is the exhibition mode right off the bat. I just wanted to test my skills against another Baseball team and so I dashed over. Much to my surprise I actually put up a pretty good fight here. It started out badly as I was down 3-0 after a few innings. I just couldn’t manage to hit the ball. I checked the settings and the reason for this was that the game was using motion controls. You were supposed to tilt your controller in order to swing. This is all well and good except for the fact that my PS3 controller has no such feature. I switched the controls to what they listed as “Classic” which allowed me to hit the ball normally. It went back to a classic “Press X” control scheme which is way more my speed.

So I started to make my comeback. I was hitting balls left and right. A lot of them went foul but others would actually be home runs. Eventually the game ended with a score of 9-6. I may have lost, but I got really close compared to most games where I lose 18-0 or something like that. At least this one made me feel like I was in the game at several points. It still doesn’t really take away from my main issue with these Baseball games though. My problem is that none of it feels like it’s in my control.

When pitching, the guy will just hit the ball sometimes. It doesn’t matter if you hit the perfect pitch, sometimes the guy will simply be ready for it. Likewise when you’re batting you can be in just the right spot and still not hit the ball. Perhaps it was outside and it just looked like it was in. Even worse is when you hit the ball and it goes out of bounds or straight into someone’s mitt. I know there are ways to angle your hit better and if you don’t want to go out of bounds then you’ve got to work on timing but there is too much that is out of my control for me to enjoy it as much as the others.

Basketball, Football, and Tennis are my three favorite sports to play in video game format and that’s because RNG is kept to a minimum there. What you see is what you get. If you mess up then it’s all on you. Sure, there is RNG present in every game and those are not exceptions, but they don’t feel nearly as frequent as they do in Baseball. No matter how refined the controls get, I feel as though that will always be holding the series back to an extent.

As always the graphics are good though. The players all look lifelike and the Baseball field is very clear. A lot of effort went into this even if it’s not quite up to Madden level. The presentation is also nice with a lot of quick cutscenes showing up between plays or after the game. Even seeing everyone heading into the stadium was a lot of fun. Slowly but surely the games are all starting to have big presentations like this and I think it’s definitely a good thing. It makes the whole thing look and feel even more realistic.

There’s a lot of replay value to be had here so you don’t have to worry about running out of content. That’s never really been a concern in Baseball games though so I would have been surprised if there was a lack of content. You can play endless matches against all of the teams and there are a lot of modes to try out. Considering that the game is only about a dollar or two nowadays it’s really a great deal for sure.

Overall, Major League Baseball 2K7 is probably one of the best Baseball games I’ve played. It’s quite solid for a Baseball game, but still doesn’t solve the things that were issues for me. I think the games need to take a bit of inspiration from the Mario Baseball game for Gamecube. Of course they wouldn’t grab the special abilities or anything like that, but the batting mechanics were quite solid. There you felt like every ball went exactly where you wanted it to go and that’s a really good thing. I’m confident it will happen in a main Baseball game someday.