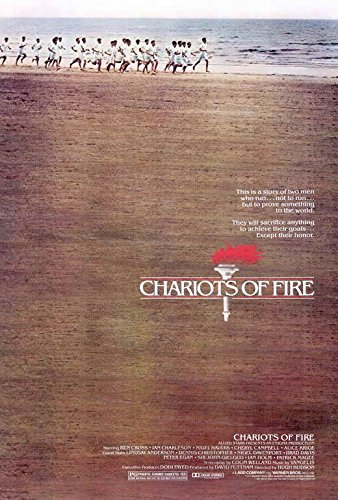 It’s time to look at the well know Chariots of Fire film based on the real events of the 1924 Olympics and follows the two runners Harold and Eric. Both characters get a lot of screen time so you can say that this film really has 2 main characters as opposed to one. We see their motivations and both have a lot of trials to get through in order to perform at this event. It’s a pretty solid adaption.

Eric is a very talented runner who has had a lot of success over the years. He has now been selected to go to the Olympics and is thrilled about the opportunity. He does receive some push back from his sister Jennie though who believes that he should be focusing on his missionary work and that it is distracting him from God. Eric’s counter is that God gave him his speed for a reason and he honors him through running. Eric also does intend to do the missionary travels, he just wants to run this race first.

His main dilemma is that one of the big races in the Olympics is on the sabbath and so he can’t race. Eric gets a lot of pressure from the committee and basically everyone involved, but doesn’t budge on this. It’s definitely why he ended up being my favorite character in the film. Harold and the others are solid as well, but Eric to me had the strongest resolve. He did not waver or even seem hesitant about his decision at any point. From start to finish he was not going to race.

His actions also proved that he hadn’t put God behind racing and always had his priorities straight. Whether or not the other racers agreed with his decision or not was immaterial to him at that point. It was the right call. Meanwhile, I wasn’t a big fan of Jennie because I feel like she should have been more supportive throughout. Having someone there who has your back is very important rather than having to do everything on your own.

Then we have Harold who has always known himself to be the fastest runner. This changes when he is defeated by Eric and now he is desperate to claim victory in the re-match and prove himself once more. It’s easy to see why he was frustrated since he always used to win, but the guy isn’t quite as humble as Eric. Furthermore, I would make the case that Eric was more talented even after Harold improved through the training. Eric was just really gifted so there shouldn’t be any shame in losing to him.

An interesting parallel is that Harold had much more support throughout the film. His fiancee Sybil was around to knock him out of his depression from the first bout. While he wasn’t in the best place art the time, it was definitely important to have her there because otherwise he would have been too stubborn to change enough for the future rounds. Then you have his coach Sandy who was really solid. He helped Harold pick up his form and do little things that improved his overall speed. There is a point where being self taught will have its limits so having a coach is extremely handy.

That’s not to say that Harold had an easy time throughout though. The College did not like that Harold hired this coach trying to say that it’s just not done and making up various excuses, but there is nowhere in the rules that forbids it. There was a lot of passive aggressive talk in the room, but Harold stuck to his guns with his coach and ended up doing quite well.

As this is based on a true story the ending does get a bit sad for one of the characters. It is good that the movie chose to stay accurate rather than omitting things just to make it more uplifting. Either way you see the complete story for both characters and see all of the good they did. Both of them brought honor to God in their own ways and ran really good races.

Overall, Chariots of Fire is a pretty good film. You’ll definitely see a lot of running throughout with various montages and such as they hone their skills and race in bigger and bigger settings. I haven’t seen a whole lot of running based films so it was definitely engaging. A fun thing about the sport of running is how simple it is. Ultimately you just have to get faster and faster. Whether you win or lose will totally depend on how you perform. There are no random elements to consider or outside factors that start to appear. It just comes down to whether or not you’re fast.

2 thoughts on “Chariots of Fire”