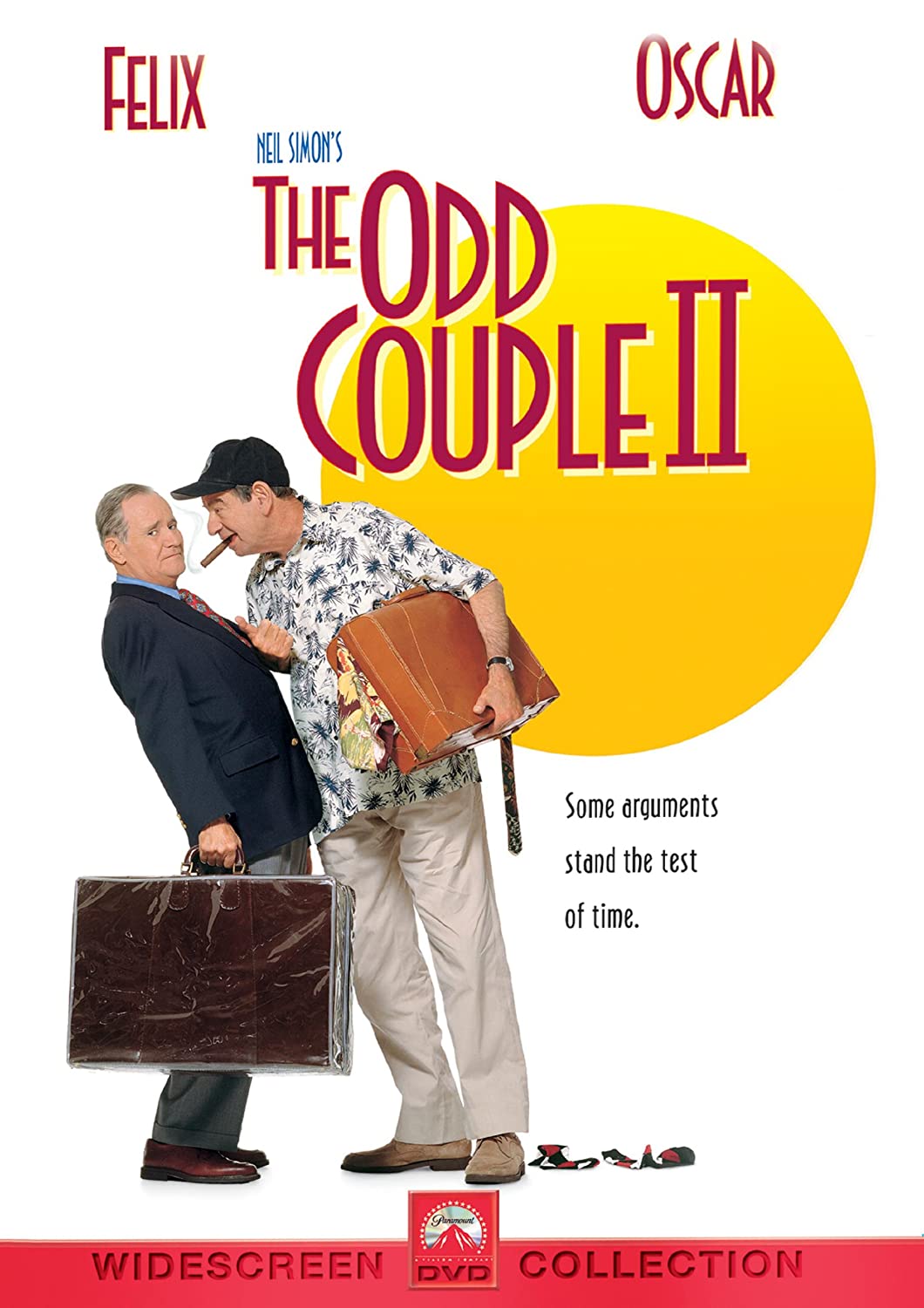 It’s time to look at the sequel to the original Odd Couple film. It’s definitely nice to see the two together again but the sequel ultimately couldn’t manage to keep a lot of what made the first film so much fun. I don’t think it was a bad idea to get these two out of the house for a sequel. You need to experiment with sequels to see what the next big thing could be. The main problem here is that it just didn’t work out which is always a risk in these kind of scenarios.

So Oscar was enjoying a nice game of poker with the crew when he gets a call that his son is getting married. Oscar’s excited for the kid and gets ready to hop on a plane, but there is one catch. His kid is getting married to Felix’s kid and Felix naturally doesn’t have a ride so Oscar is going to have to drive him over now. Oscar knows this isn’t going to end well but tries to make the most of it. The problem is that Felix immediately needs a lot of breaks to use the bathroom or to go eat. Will Oscar still make it in time for the actual wedding or is he doomed now?

In a film like this both parties will ultimately make some mistakes but there is usually one party who is clearly more at fault. In this case that would be Felix. He was just a little too unreasonable at times as he always tends to be. On the plane he couldn’t sit next to anyone and having to take so many breaks on the car is a problem. Maybe once you’re 90 or something you need to constantly stop but Felix isn’t that old yet. He can wait an extra hour without eating and then things would work out better for him. He also seems to get upset awful fast in this one as he even threatens Oscar a few times. Felix has definitely let himself go over the edge in these latter years.

Oscar is a lot of fun as always though. He tries to have a good time and has a good one liner comeback for everything Felix says. Oscar is always ready for what comes next and he just seems like a much more reasonable guy than Felix. He makes his share of mistakes like forgetting Felix’s luggage and blowing up the maps of course. I blame Felix halfway for the luggage though but the maps was all on Oscar. Oscar just seems like an easier guy to get along with. If you have a good time then he will as well. Felix is the one who always tries to make it personal.

There’s not much to say about the kids, but Oscar’s son definitely comes across as a pretty terrible character. You just can’t have second thoughts about the wedding on the last second before walking up the aisle. That’s just terrible and the worst time to have a crisis. Considering that the guy only gets a few seconds of screen time there also isn’t time to get to like the guy or to understand why he is having doubts. Maybe there are legitimate concerns but based on his scenes…probably not.

The film fumbles a bit around the halfway point with Oscar and Felix heading to a bar and flirting with some locals. The whole scene has nothing to do with anything and the age gap here is so large that its just sad. These scenes have no point being in the film and they should have been cut. I suspect they were only added in to give the heroes another scene with the cops but we definitely could have found other ways to do that. We don’t have to make Oscar look this desperate.

The police subplot was actually entertaining. It was fun to see the heroes go back to the station over and over with new crimes. That’s the kind of running gag that makes sense for a movie like this as it can ultimately tie into the ending and connect the various plots. I was half expecting to see all of the cops at the ceremony. Maybe the writers felt like that would have been a little too cheesy though. I dunno, I think it would have worked out just fine.

In terms of writing the film trips up a little as well. Felix drops in some pretty intense language which was incredibly forced. I can’t think of any time an f bomb was thrown in that wasn’t forced to be honest. It just never works no matter what the context is. Keep the language under control and your writing will always be better for it. The movie has a lot of funny moments and a lot of scenes that don’t land as you would expect for most comedy films. The pacing is solid so ultimately you stay entertained. One thing that would have helped the film further would have been to remove the random romance plot for Felix at the end. Not only is it making him look desperate again but there is not enough time to establish a relationship. I don’t care what the scenario is, a 3 hour flight is not enough time to really get to know anyone. It’s especially no good if your only reason to make conversation is because you are looking to get into a relationship.

The only organic way this can work is if you are chatting to someone because you actually just want to pass the time by. The two of you have some shared interests and that leads to being friends so you trade facebook profiles and stay in contact. Maybe 10 years later you pursue a relationship but by then both of you will have realized that nothing beats being facebook buddies. Basically what I’m getting at is that this was yet another plot that didn’t need to be in the film. It should have focused more on the banter between Felix and Oscar with scenes like driving the truck or making a bunch of stops. After a point there are too many distractions that take away from the main focus of the actual film.

Overall, The Odd Couple II is a film that should give you some laughs. The pacing is solid and it’s fun to see the main two bickering again like the good ole days. The film just should have trimmed some of the subplots like the finale which comes out of nowhere and the hanging out with two girls at the club part. Work on the writing a bit and then you’ve got a very solid film. The premise is still good and I think a reboot could possibly still work to improve upon this one. I suspect we’ll have to wait a little while for one of those though. If you really like the first Odd Couple film then you should check this one out. Just don’t expect it to be quite as good as the original.