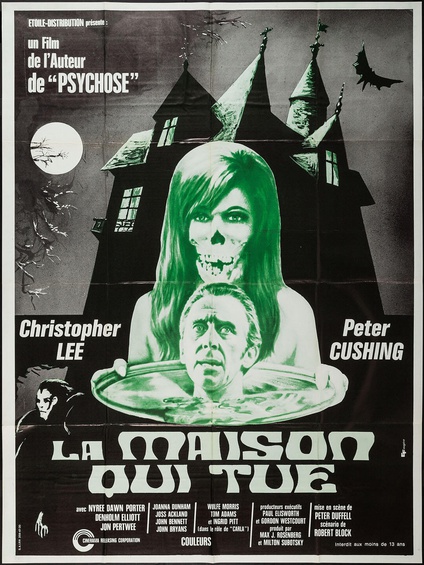 It’s time to look at a horror anthology. I’m not big on horror films and I’m not big on anthologies so I can’t say that I went into this one with high hopes. That said, it was actually quite a bit better than what I was expecting to the point where I could call this a good film. Maybe not an amazing film but better than over 90% of the other titles I’ve seen in the genre. This is how you should handle atmosphere and scares. It feels a bit like the Twilight Zone episodes of old.

The base plot connecting all of these segments is about an inspector trying to find an actor who has gone missing. He talks to a real estate agent who calmly explains to the inspector that the house is pretty sinister so bad things happen there. The inspector isn’t impressed but decides to stick around as he listens to a few stories. Did the house really cause all of these murders or was it in the wrong place at the wrong time? One thing’s for sure, a lot of bad things do tend to happen here.

The first story is about a writer who decides to move into the house. The house is in really bad condition but he feels like this will actually help him in coming up with ideas which is a decent rationale I suppose although I’m not sure it’s worth buying a house for a few months though. He begins his next murder book about a strangler and gets so engaged in the material that he starts to see the guy around. Is he going crazy or is the strangler actually here? This may end up being the last book he writes.

This was a pretty good way to start the saga. We got some twists and turns and there was a good amount of tension here. You can interpret the ending a few different ways. Personally, I took it as the guy who was hired was legitimate but what he didn’t count on was the spirit still residing in the house from the picture which ultimately took him over and gave us the twist ending. The writer definitely seemed a little crazy from the start which is the only way this plan could have worked from the start. If he had a bit more control he would have realized that something was up.

The next story is about the main guy heading over to a wax museum. One of the statues looks a lot like a lady he used to like. He stares for a while but then the owner drops some cryptic threats about it so the guy decides to never return. Unfortunately an old friend of his stops by and insists that they return. The guy has no self-control either so he keeps on going back to the place and the owner doesn’t like that very much. This is sort of like an abridged version of the Wax Museum films but handled a lot more tastefully. It’s a little hard to believe how badly the guy does against an old man with an axe though. You can probably see the ending coming and it’s harder to feel as sympathetic to the characters with the bad moves they make. The main guy warned his friend and at that point he shouldn’t have gone back in. It’s a little harsh but if someone keeps trying to jump into a fire you can’t follow them.

Next up was the weakest story if you ask me. A guy moves in with his daughter and she seems to be afraid of fire for some reason. The guy hires a tutor who starts to get close to the daughter but for some reason the father always prevents the tutor from getting the daughter any gifts. Eventually the daughter gets a wax doll and the father’s journey begins to reach its end. We learn some twists about the daughter but I can’t say that they justify the father’s actions in the slightest. If anything he created a self fulfilling prophecy here by being so mean to the kid. It reminds me of a villain in Fairy Tail. If you know that this character can destroy planets, why teach that person to resent everyone right away? It makes no sense and just speeds up everyone’s demise.

Then we have the classic vampire story which involves the actor. He is working on a new vampire film so he stops by a store and buys a cloak. Unfortunately whenever he wears the cloak he is overtaken by an urge to bite people. He decides not to wear it anymore but what if someone else wears it? I’m not a big vampire fan, but the story was reasonable. Mainly what made it so good was the big plot twist at the end. It was a “big brain” moment from the villains as we realize that they were always in control. It’s a very different take on how this kind of story would end and I definitely appreciated it. It also means that the villain may have even had better acting skills than the main guy.

Finally that takes us to the climax where the hardened inspector thinks this is all hogwash. I suppose that’s a reasonable reaction to this, but in a less reasonable take he rushes off to the house in the dead of night and goes straight to the basement. He actually does better in the fight against the villains than I expected, but at the end of the day you already knew how that was going to end. It was a pretty fun way to end.

One thing against the film though is that ultimately it’s really hard to pin any of this on the house. It was just an innocent bystander the whole time that was probably hoping these people would stop moving it in. It didn’t actually do anything in pretty much any of the stories. The Wax was just a crazy guy running around, (maybe the Wax location was haunted) The one with the girl was because she had powers, and the vampires already had their plan. I’m willing to defend the house in this case because I do think it was just in the wrong place at the wrong time and didn’t mean for any of this to happen.

The writing is pretty solid here. As mentioned, it does a good job of building up the atmosphere without suddenly trying to make everything gritty and violent. That’s exactly how you’re supposed to do this. It’s a very tasteful array of horror stories and the length helps to prevent any of them from dragging on although I do think some of these could have worked as a whole film. I just doubt they would have been quite as effective. These still had time for the various plot twists and such which is really the important part if you ask me.

Overall, The House That Dripped Blood is a bit of a misleading film but it’s solid nonetheless. None of the stories are particularly bad and the best ones are quite solid. That makes for a pretty all around story since each story is pretty different. If this sounds like it’s up your alley then you should check it out or if you want more of a grounded horror movie. I think the part that will stick with you the most is that if you have an evil cloak that grants super powers and evil urges you should probably burn it or at the very least insist that nobody wears it after you. Even if you may have been able to take it off, it doesn’t ensure that the next person will be able to.