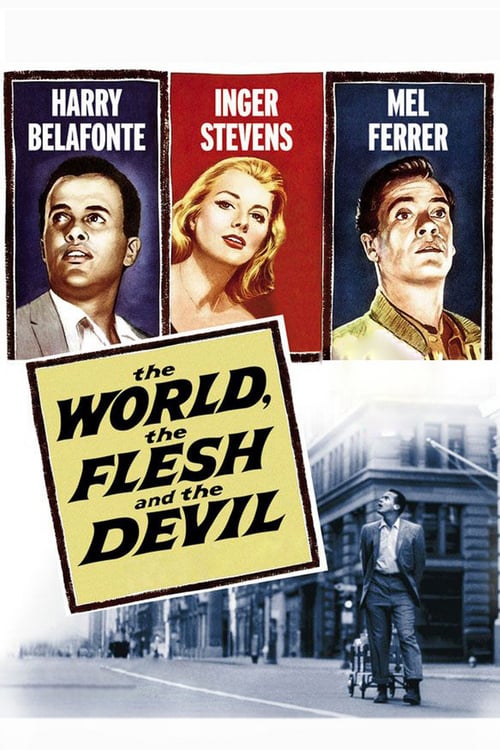 Well, you certainly can’t say that the title isn’t unique. It’s an attention grabber although admittedly in the opposite way of what the film is going for. If I walked into a theater and saw a film with this name I’d do a quick 180 and head back to Sbarro’s. Still, the film is reasonably good. I had some major complaints with the main characters as none of them were particularly likable but it made for a solid plot nonetheless.

The film starts with Ralph getting stuck underground. After a few days it seems like everyone has given up on him so Ralph reluctantly heads back to the surface on his own. The problem is that everyone is gone. Far as Ralph can tell, everyone has died somehow. He makes the most of it, but it can be pretty lonely. That’s when he runs into a lady named Sarah who is the last lady on Earth. Ralph is happy to at least have someone for company and they grow pretty close. He is reluctant to get romantically involved though despite her attempts. Things change when a third guy shows up named Ben. Ben is also interested in Sarah but unlike Ralph he is pretty aggressive about it. Who will Sarah choose?

I always like the setting of a world where humanity has been taken out of the picture. It’s always very thought provoking to see how you would try to survive like in Dr Stone although this would be a little more similar to The Last Man on Earth. Either way, you have to find a way to not just survive in the short run but also long-term. That means growing your own food and finding renewable sources of energy. The film doesn’t really focus on this aspect although I think it would have been very interesting. One tough part about these films though is how you end them. It’s really easy to run on the premise for a while, but eventually you do have to start a goal. It’s why to an extent titles like Dr. Stone, Resident Evil, and other survival stories have their best parts near the beginning. The longer you can keep up the mystery the better. That’s not to say that the series go down when the mystery is gone, but nothing beats that early peak.

This film goes from there into total romance territory which is something I often warn against doing. There are already thousands of romance stories, can’t we just have a survival one instead? The romance is pretty bad in part because of the characters. Ralph is determined not to make a move to the point where he keeps declining Sarah’s advances. Ben is pretty obsessive about how he likes Sarah and brings it up a lot. Then you have Sarah who clearly likes Ralph more than Ben but is fine with rebounding with Ben if necessary. At the end of the day it does seem like she will go with whoever is the last person standing so that doesn’t fill you with a lot of confidence on how loyal she’ll be.

Ralph’s reasoning for declining Sarah isn’t because he likes the friend zone, but because of the racial barriers between them. He believes that Sarah wouldn’t have given him a chance before the world blew up or she may not have even had a chance to meet him because of how society is. He is likely correct, but it is a whole new world now. It’s still a big assumption on his part to assume that she is racist. Assuming it was the latter and she just wouldn’t have had a chance to meet him, that’s not to say that she would have disliked him initially. It’s still fair to decide not to get involved with her, but then he should be direct about it from the start and explain that it’ll never happen. Instead he sulks an awful lot and still gets jealous with Ben which makes him too wishy-washy here.

My complaints with Sarah are really more of the same. If she likes Ralph then that should be game over for Ben or vice versa. Instead she does hang out with both and seems to encourage Ben throughout all of this. She knows that he likes her so if she isn’t interested then she should just say it. Leading Ben on when he has no chance is pretty awful. She gives him hope in quite a few scenes and likely enjoys the attention but it’s still pretty bad. Meanwhile Ben is pretty terrible from the start. He knows about the tensions between Ralph and Sarah and doesn’t care. Additionally he even plans to murder Ralph to get closer to Sarah. While this may actually work eventually, it’s still a pretty bad plan.

We get a prolonged gun fight near the end of the film to fill the action quota. It’s not bad although it could have been a lot more exciting. Imagine a live action Fortnite type showdown where both of them are running around the city. If anything the tough part is that if your battlefield is an entire city that is empty you could run for days, years, or forever and never find the other person. Just think about how huge these cities are and now shrink that down to 2 people. There’s absolutely no way to find each other without one person being really loud. The ending’s also a bit on the cheesy side but it could be worse I guess. They’re basically just pushing the problem off for a few months and then off screen one of them is probably going to get it.

Overall, This is a film with some interesting ideas but it doesn’t go into them enough. The premise of humanity being wiped out is already pretty great. Just focus on that. Instead we get a love triangle that takes up the whole movie and it’s not nearly as interesting. I think you can make a good triangle plot with two guys who both have their good qualities and a girl who isn’t sure how to shut them both down because she likes guy C. That would make for a pretty great plot. What we get here is more of a head scratcher. The writing is good on the whole, but the movie does drag on and the missed opportunities stand out. If the premise still sounds interesting to you then you should check it out. Just be warned that after the opening act the film forgets about the apocalypse angle.