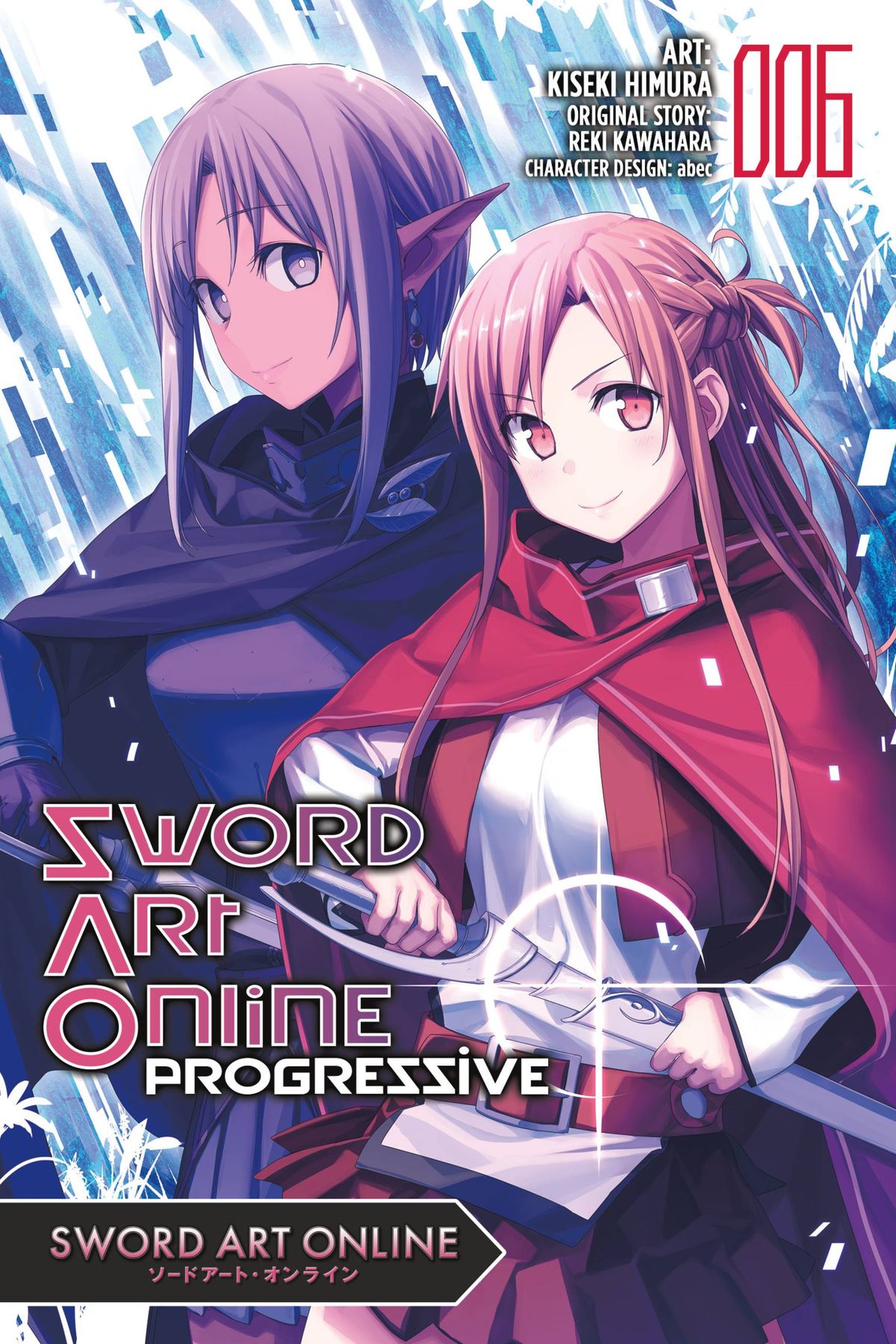 It’s time to take a look at one of the more well known Sword Art Online spinoffs. I’ve heard a lot of good things about Progressive over the years and how it brought the series back to its peak. Being back in Aincrad from Arc 1 was definitely pretty cool since I did think that those had the best stories. Unfortunately the manga takes the easy out of adding in a bunch of fanservice during the second half of the series which does ultimately hold this title back. It’s a shame since it had started out pretty well. Apparently the manga adds quite a bit and changes the story/personalities as well so it’ll be interesting to see how the novels stack up. That said, if you’re a mega SAO fan then you’ll probably still want to check this one out.

Mainly this series is adapting Arc 1 all over again but doing it very slowly. The castle has 100 floors and the only way to beat the game is to clear them all. Naturally in the main series they weren’t quite able to go through all of the floors so the goal of this manga is to show them to us one by one. As a result, after the 7 volumes of this series the heroes are still only up to volume 3. That’s a pretty good amount of pacing I’d say. We’ll see if they can continue to use up so much time. It’s fun though and helps make the series more about the fantasy setting and slice of life aspects. We still get fights of course, but Progressive is more about the character interactions.

We see Kirito start out as the loner he always was with Asuna being a bit of a newbie to the game world. Gradually she grows more experienced and he learns what it is like to be in a team. It makes for a pretty good dynamic between the two of them. We see them train up and gradually improve their abilities. While there isn’t much of an ongoing plot for the most part, the final 3 volumes give us a mini arc of sorts that was completely not in the original story. It’s a quest arc. Basically Kirito and Asuna run into a group of elves who are duking it out. They are given the option of joining either the light or dark factions. Kirito lets Asuna pick and she decides to help the Dark Elves. They help the leader (Kizmel) take down her opponent.

The full quest is a bit on the longer side. They have to help her deliver a key, find the traitor and take down the opposing army. The tricky thing is that some other players have taken the light side and of course if they die in the game they die in real life. This means that the heroes are going to have to tread carefully here. You’ve also got a shady Sword Art Online player who wants to challenge Kirito and possibly eliminate him from the world. It’s nice to see Kirito going all out here and it makes for a pretty nice fight. It’s probably the most intense battle in the series with a lot of back and forth with good swordplay. Kirito rarely finds a challenge for himself so this guy did pretty good in managing to match him. 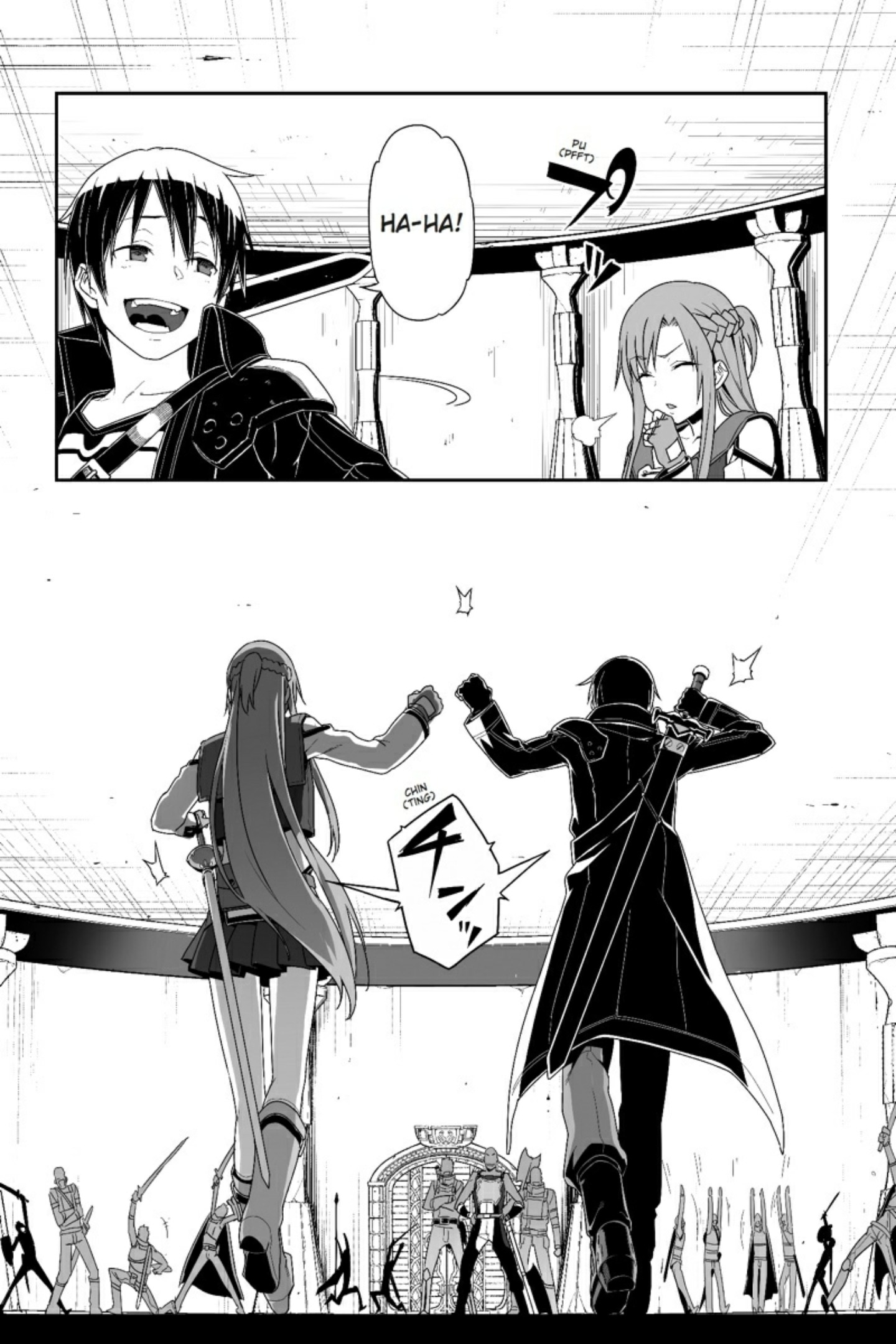 As for Kizmel, she’s a pretty solid character. It’s a shame that the series uses her for fanservice almost constantly. The series throws in multiple bath scenes which is pretty forced. She’s portrayed as a big sister figure to Kirito and Asuna. She is pretty advanced for an A.I. as well since she can understand human phrases and adapts rather well. It further shows just how advanced Sword Art Online was as a game in this universe. The A.I. systems were already pretty adaptive and this is only arc 1. Her skills were also far above Kirito and Asuna’s at the time. It makes sense since they are still in the opening floors I suppose. At this point nobody really had a whole lot of levels yet and this is the kind of quest where you are mainly playing as support.

It’s also interesting to see a time where Heathcliff had not yet formed his own group. At this point there are only two main attacking squads and neither of them are particularly helpful. They have numbers but not a whole lot of power. This was one of the more interesting points in the game because it’s fun to see Kirito and Asuna teaming up and clearing a bunch of quests on their own. It shows that they really don’t need the army and are prepared to handle everything on their own. If you were ever trapped in a game it does make sense to train a lot solo or in a small party rather than joining an army. It would be a lot harder to level up with so many people around.

Really the series is at its best when it’s letting the characters just enjoy the SAO environment. Learning new skills and having fun in the world is what the arc is all about. While Kirito and Asuna are both great characters, the supporting cast is a bit weaker so you don’t really want the focus to be on them. I could never really get behind the rest of the characters but fortunately each arc would add at least one good character so the series as a whole has a solid cast. It’s part of why Kizmel was a good addition here since she’s easily one of the better characters. I was also glad that she could fight at such a high level. Arc 1 will definitely always be nostalgic.

I was also glad that Asuna got a pretty powerful rapier here. It helped close the gap with Kirito and for a while near the end she was the power hitter. It’s what makes them such a dangerous combo. Asuna can land hits with lightning speed and then Kirito finishes the job with a crispy combo. As they said, it’s almost unfair for the rest of the players who are still struggling with the basics. Still, they’ll learn the ropes eventually. You just can’t hope to match up against the main characters. I wouldn’t mind if the series took some queues from the games and started adding in future characters. The series would have to completely be known as an AU after that, but I think it would be worth it.

The art is pretty solid and definitely one of the best for SAO. It has a pretty simple design set up like an online manga or Bleach. This allows the character designs to be pretty smooth and we also get a lot of great fight scenes. It’s all very clear and lets you read through the adventures with ease. You can clear all of the volumes in no time at all. At 7 volumes the series is a reasonable length although I always think you should aim to be at least 10 volumes long. That’s when you know that you’ve made it to the big leagues. 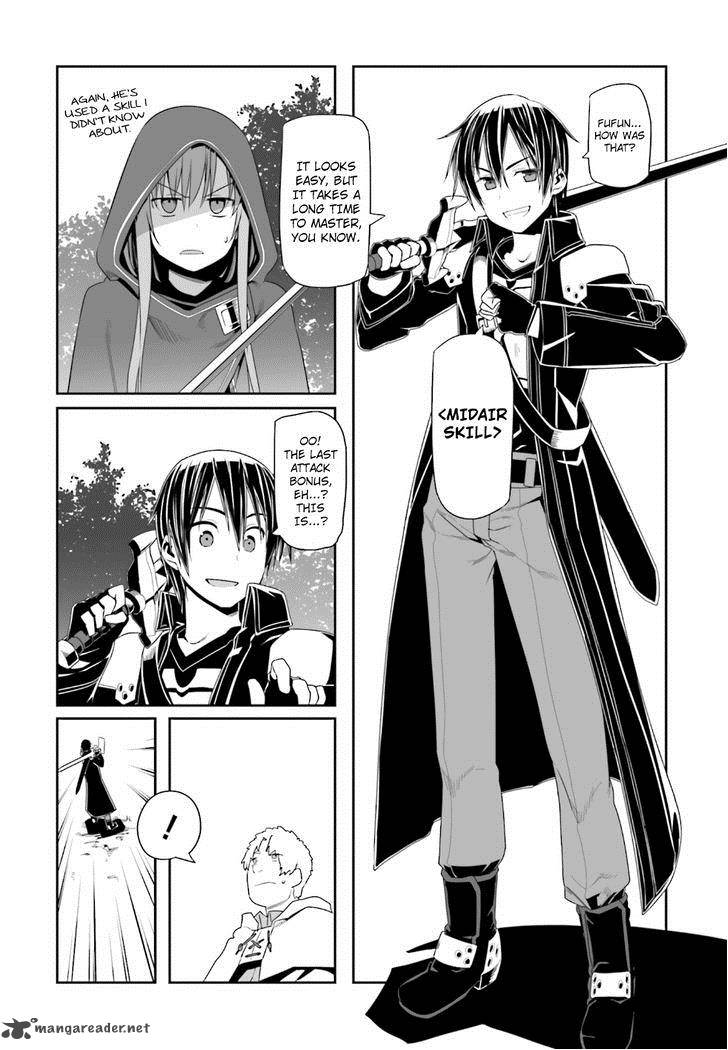 Overall, Sword Art Online Progressive is a series that is a lot of fun but does get bogged down by the fanservice. To an extent you can certainly block it out, but the series goes pretty overboard with how often it occurs. After a point it can’t help but lower the score of the adventure. It’s a shame that SAO tends to fall into this trap because the series is so awesome otherwise. Where else are you going to get a main character quite like Kirito? It’s really tough to match a guy like that. From what I’ve heard you are better off reading the novels for this part of the franchise. The original adaption of the first arc is also better as it plays the concept pretty straight even if the art isn’t that good. I’m ready for the sequel though and hopefully that one will fix some of these issues. After all there are still plenty of floors left to conquer and I want to see them all!