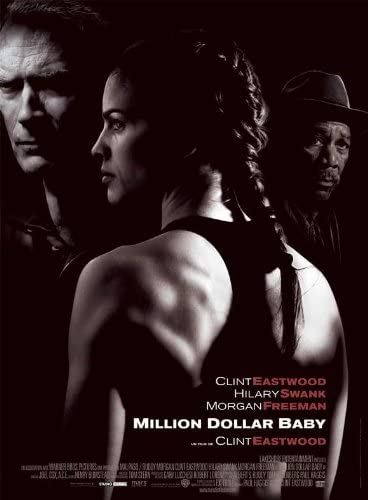 It’s time for a film about boxing. There have been quite a few good ones over the years like Rocky and Creed. Those did a good job of delivering some pretty hype fights with epic storylines. Both of them will not be forgotten anytime soon. This one started out like it was going to be another one of the greats. Unfortunately it flew off the rails towards the end and ruined any potential it might have had. The first 2/3 of the film is quite good but the final part definitely destroys the film. That’s why they say a good ending is important. You can start off quite amazingly but if you trip over the end that’s what you will be remembered for.

The movie starts with Frankie winning more fights as the manager of a top ranked fighter Willy. Unfortunately his boxer eventually leaves him because Frankie never let him compete in the title matches. Frankie is now without a boxer. Meanwhile a girl named Maggie has started showing up as the gym and is determined to make Frankie her manager. He’s quite reluctant as he’s never coached a girl before and doesn’t want to start now. Still, she gradually weakens him and he starts to warm up to the idea. Still, a part of him is worried that this is a bad idea and he doesn’t want to have any more regrets.

There aren’t many big characters in this film but they all had to deal with a lot of issues throughout the film. Frankie has his own reasons for why he never lets his boxers attempt the big fight. His instincts are usually pretty good and it’s something that can come back to bite you. At the same time, it seems like this isn’t quite the right profession for him then. In boxing people are always going to get hurt so if you’re not prepared for that then you’re going to be in for a rough time. Frankie definitely plays the role of the angry coach who’s always got something stern to say. Deep down he’s a nice guy but it’s hard to get to that level. He makes for a good character though and a solid lead focus.

Then you’ve got his friend Eddie who does a lot of the work around the gym. He’s a lot quicker to give advice. Usually the other characters aren’t quite ready to hear what he has to say but he does his best. He has one especially good scene where he takes on one of the newer characters. He does pretty well and shows that he can still fight. He’s easily the nicest character in the film and I’d say that he steals the show. We all need an ally like Eddie. Someone who will have your back through the tough times no matter what.

Finally you have Maggie who really wants to be the world’s best boxer. She’s had a pretty tough life so far as her family turned out to be pretty toxic after her father died and she doesn’t really have anyone to support her. It’s been tough to make ends meet and boxing may be her only shot at a new life. She’s quite determined and that allows her to climb the ranks quite fast. Her technique is quite solid and she showed that she could hang with the best. Maggie takes all of the situations quite well and has some true grit.

While the film is focusing on the boxing it can be quite good. You really get to see proper footwork during the battles as well as the training you have to go through in order to get to the top. The characters are pretty solid and the pacing is good. The film would have been really solid if it had just ended with a slightly different outcome to the final fight or just cutting off at that point. Continuing further was ultimately a mistake.

I can’t really go much further into the ending because of course it’s a huge spoiler to the rest of the film. Needless to say, the movie decides to go for a lot of grit and dark themes towards the end. It suddenly stops being about boxing and becomes more of a tragedy drama where things continue to get worse and worse. The film doesn’t really leave any hope left and you’re just waiting for it to end at this point. The final act drags on for quite a long time. The film also randomly adds a backstory involving a dog dying and someone who was disabled getting beat up. It’s like the film suddenly changed gears and decided it wanted to be as mean spirited as possible.

Even the plot about Maggie’s family doesn’t feel truly necessary. I think the references from early on would have sufficed there rather than getting them involved. Even threatening Frankie at the hospital was a rather odd scene. I’m assuming after that Maggie told Frankie to leave for his own safety or at least I hope that was the case since it would seem out of character otherwise. Really what it boils down to is that the final act of the movie just wasn’t any fun at all. It crossed the line of getting a little too grim dark in what otherwise would have been a pretty solid adventure.

Overall, The Million Dollar Baby is a film that could not keep up its momentum. It built up a pretty solid plot with some good fight scenes and ultimately threw it all away for shock value. I’d definitely recommend watching something like Rocky or Creed instead. Those films manage to finish the ride and deliver with great endings to each of the installments. A good ending applies to just about every kind of game, sport, or entertainment. Finishing is the true skill you need to have in order to make it to the next level. Hopefully if this film was to ever get a remake or a sequel someday it would do a better job of finishing the fight. Until then this will definitely be known as the weakest boxing film I’ve seen.