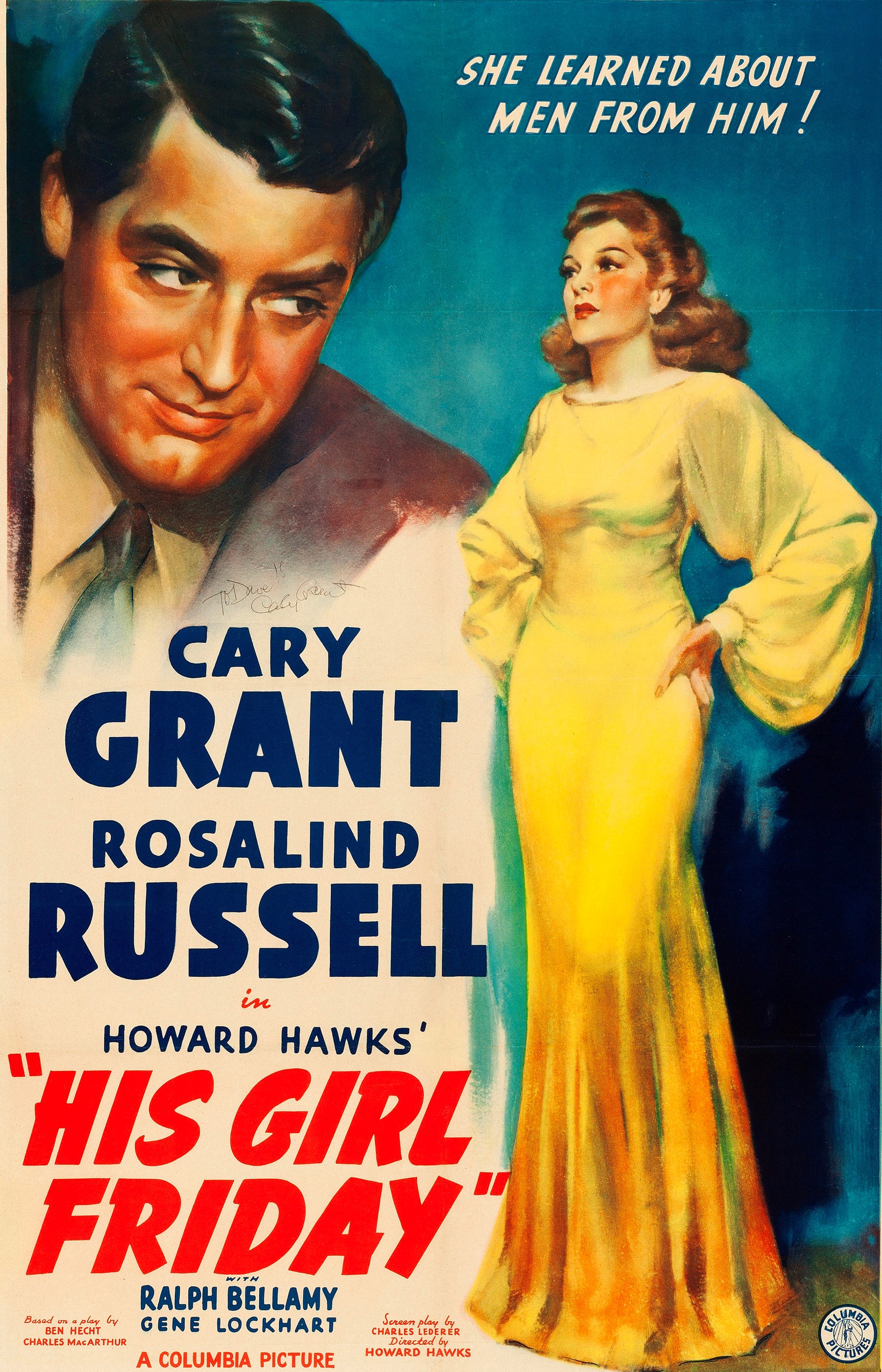 It’s time to look at a comedy film from a while back and I have to say that it has aged exceptionally well. The dialogue is sharp and quick with a lot of great lines constantly thrown at you. The characters are solid and despite having a long runtime the film never lets up or loses your interest. That’s something that can be rather difficult and gets more difficult the longer your film is. That’s why I can say with great confidence that this is a pretty great film.

The movie starts with Hildy heading to Walter’s office to explain that she is about to marry someone. She had divorced Walter a while back although he keeps trying to win her over. She figures that now maybe he will finally stop in these attempts since it just didn’t work out. She also made sure not to give him a lot of time. She is moving to Ohio in a matter of hours. Walter knows he must move fast so he quickly decides to treat Hildy and her rebound Bruce to a quick dinner. During that dinner he sets his plans into motion. He’s got quite a complicated plan but if it works out then he will have gotten Bruce out of the picture and finally gotten back together with Hildy. Will Bruce stand for this or even realize what is going on?

The setup here is perfect from the start. The movie introduces Walter as a very fast talking guy who is used to getting what he wants. The opening banter with Hildy already establishes her as the only character who can really keep up with him. The rest either get slammed out of the office or tricked into doing what Walter wants. A big part of the film is really a battle of the minds between Walter and Hildy. Walter comes up with plans and Hildy uses her reporter skills to outwit him at every turn. The problem is that Walter is playing with a full deck of resources while Hildy only has Bruce as her backup and he is decidedly not one of the smartest characters here. More on him in a bit, but this just shows how well Hildy was doing to be able to keep up with Walter under these circumstances.

She was a reporter for many years and according to Walter, one of the best as well so this is no surprise. She shows her skills on many occasions as well as in some subtle moments. One good example of this is when the gunshots started going on outside. All of the reporters ran outside instantly while she stopped to set up the story and then left. The rest got back way before her but only with pieces of the story and some unrelated findings. Hildy made sure to get the complete story before returning. A lot of comedy hijinx would ensue but that was a quick way to clue in the viewers that she was clearly experienced and knew what she was doing. The whole thing is handled really well.

Once Walter arrives they also team up and pick up on each other’s plans rather quickly. It shows why they were perfect teammates in a story and why they are so deadlocked when they go up against each other in a battle. They’re both just very used to the usual games that go on. So the banter here was quite excellent throughout and the best part of the film. They really tear into each other although Walter always keeps up the appearance of being a super nice guy while Hildy keeps going for shot after shot. It’s a clever ruse on Walter’s part to make it look like he’s taking the high road the whole time.

The supporting cast is pretty solid as well. I can’t really say that there were any characters I disliked. The one that made the most impact was probably Louie. He’s a very loyal member of Walter’s team who is even willing to commit crimes in order to help out. Walter wouldn’t have made it nearly as far without him at the ready. Walter’s group is also quite diverse in how they handle his different crimes. Forget different reporting divisions, Walter has whole crime divisions set up! Now let’s talk about Bruce. So he’s the token “nice guy” who means well and does want to make Hildy happy. He’s not able to keep up with the quick banter or wit of the other characters but what should that matter as long as his intentions are good right? Some people just aren’t able to act in that wildly high speed interaction style. The main problem with him is that aside from that he’s not too smart. He isn’t able to see through any of Walter’s plans.

I wouldn’t blame him for this normally except that Hildy warned him from the start that Walter was no good. She told him time and time again and yet he kept believing Walter over her. Look, anyone can pretend to be a good guy on the outside for a while. I understand wanting to take that at face value which is a good thing but if your fiancee soon to be your wife in a day is telling you that her Ex is no good…shouldn’t you listen? I feel like that’s something that goes without saying so I kind of have to blame him for everything that happens. Even at the end he is very quick to run off without really listening to her. He could have waited til after the story but by this point he had been manipulated so much that you just can’t take him seriously. Still a nice guy, but unfortunately a very gullible one as well.

Walter and Hildy steal the show either way and are the best characters. Walter is one of the best main characters I’ve seen in a while and Hilda does the same for heroines. The film wouldn’t be nearly as impressive without them. I also liked the scene of Walter manipulating the sheriff into taking the desk away. It’s a classic case of reverse psychology and one that was being executed really well. I have to say that the Sheriff never really stood a chance here. He was completely outclassed in wit as soon as the round began and there was never a chance for him after that. There were a lot of corrupt guys walking around and by the end of the film the paper will have slammed most of them. You do have to recall the very first scene of the film where Walter sends the governor a letter though. That will become important for the final scene of the film which was a nice way to tie things together.

Overall, His Girl Friday is a great film. It really nails all the dialogue and plots running around. The film’s just a lot of fun. Some of these plots could have backfired if not executed exceptionally well like Walter’s sabotage efforts. The idea of the Ex trying to ruin a couple about to be married is something that can easily go sideways. The reason it works is because Walter may be corrupt and a trickster but at least he does actually seem like a very nice guy otherwise. He’s one of those “Nothing personal” guys. It’s a hard angle to do but the film got it. I’d highly recommend checking this out if you like a good comedy title. It doesn’t get much better than this.