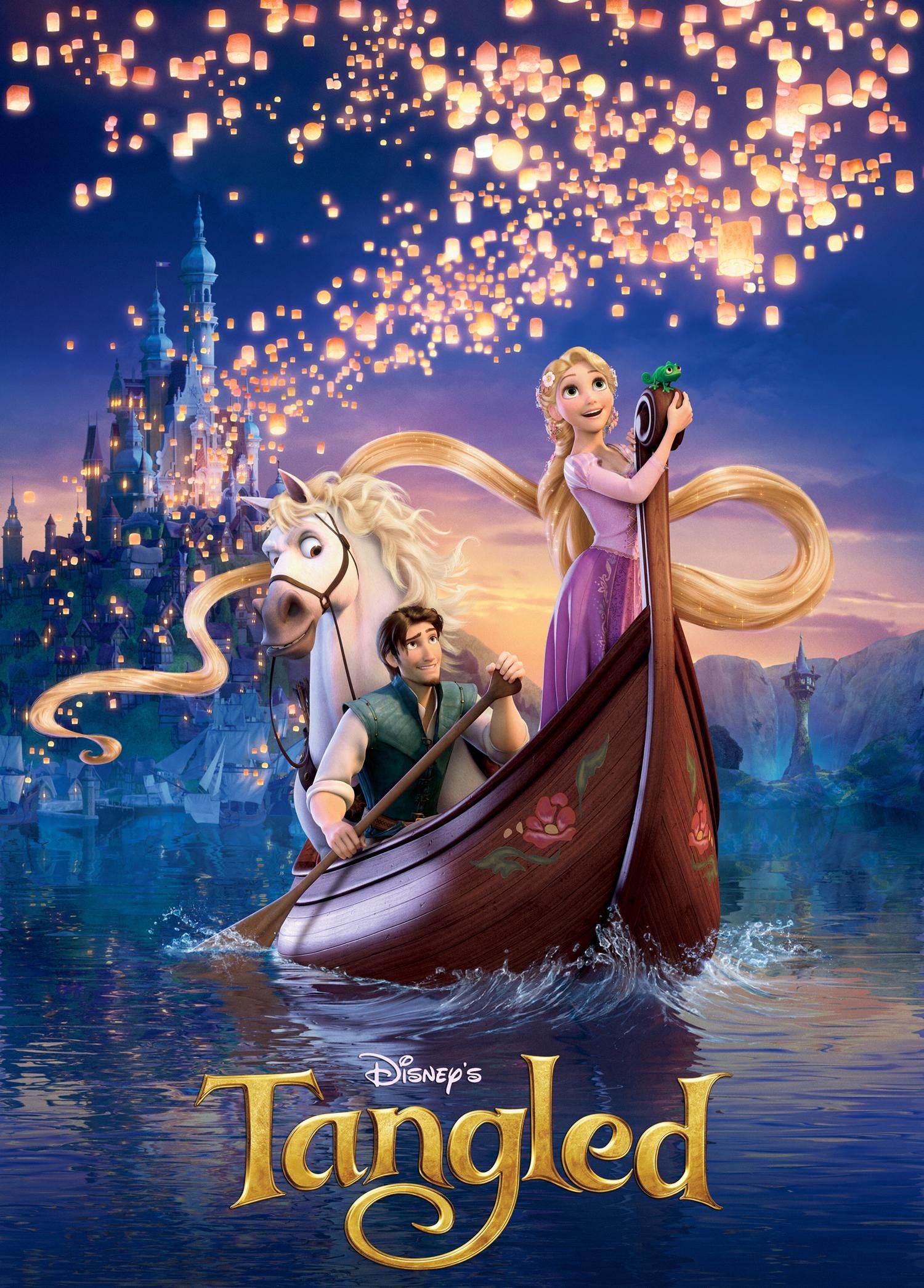 It’s time to look at a pretty big Disney film from back in the day. Tangled may not have soared to quite the same heights as Frozen but it still made a name for itself in its own right. The tale of Rapunzel is definitely a classic to be sure so it’s nice to see a full fledged adaption. The movie has solid songs, strong writing, and pretty good animation so it’s a solid all around package. I’m definitely in the camp that says Frozen still wins the rivalry between the two but Tangled is certainly a solid film that doesn’t back down to anyone.

The movie starts by showing us the origin of Rapunzel. Her mother was gravely ill so the kingdom used the legendary flower to restore her health. This resulted in Rapunzel being born with incredible abilities. Her hair has the ability to heal injuries and even to dial a person’s age back. It must be used regularly though as it can only stall the age from occurring for so long. A lady named Gothel kidnaps Rapunzel one day and hides her in a tower not too far away from town. I do question to an extent how the kingdom never found her but realistically I suppose it is a long journey and you can’t catch everyone. Rapunzel grows up for many years trapped in the castle with Gothel who has tricked her into thinking that they are mother and daughter. One day a thief named Flynn tries to hide in the tower to avoid getting caught by the military and is promptly knocked out by Rapunzel. Since Gothel will never let Rapunzel go, the heroine has decided to force Flynn to escort her to the annual party in the kingdom. Flynn doesn’t want to do this but it’s not like he has much of a choice. Gothel will have to try and tear these two apart while keeping the facade up but it will be difficult.

You’ll recognize most of the usual story beats. The stories are all pretty popular so the goal is always to just execute the ideas well and I’d say that Tangled succeeds in this mission. As always there are a good amount of songs and the film is always doing something interesting visually so that you have something to watch while the songs are going on. That’s always low key been something Disney does way better than everyone else. Part of the fun in the live action Aladdin film was how many different special effects they could throw at you in a single song. You gotta admit, a lot of films don’t really go the extra mile there. There’s also so much you could do with Rapunzel’s hair that it would be a shame to miss the opportunity.

Rapunzel is a solid heroine. I like how independent she is and the fact that she knows self defense. She did actually take Flynn down for the count when he first appeared rather than panicking or anything of the sort. She also hatched a good plan and made herself a quality deal. Rapunzel’s hair having actual super powers is another feather in her cap so to speak. I suppose her powers merit more comparisons with Elsa and they are fairly close in how cool each character is. Rapunzel gets tricked perhaps 1 too many times but ultimately she makes the right move. I do have to question how she was taken out near the end of the film but I’ll assume it was a cheap attack.

Then we have her partner Flynn who is solid and gives us a lot of the comedic wit in the story. He’s certainly no hero when the film starts as he actively robs the capital. His overconfidence is also what leads him to get caught as he could have just stolen the crown but naturally had to make sure everyone knew he did it. Villains striving to get the credit they think they deserve is definitely nothing new and often sabotages them just as much as the heroes. He gets a solid character arc with Rapunzel though and it’s handled pretty well. One thing that will always elevate a film is good banter and this one certainly had that.

Gothel works as a solid villain. She may be a bit on the obvious side at times with how she doesn’t even pretend to be a nice mother to Rapunzel. I’m not sure what her rationale is, but it’s not unrealistic. I wouldn’t have minded a more nuanced take on her character but I think the film didn’t want to take a chance on her becoming sympathetic. At her core, Gothel is a petty thief who literally kidnapped a baby so that’s the end of that. She also earns extra points for actually stabbing someone. Gothel’s one of the more serious Disney villains we’ve seen. Maximus is the main animal character here and he’s definitely a lot of fun. The horse is incredibly determined to complete his mission of tracking down Flynn and you have to give him some major respect for following the thief for as long as he did. Maximus does a whole lot to complete this task and it’s really impressive. He was definitely a scene stealer if you ask me and the best character in the film. You just can’t top this guy.

With good writing and animation to back this film up it was definitely bound to be as good as it was. There’s really no weakpoints to the story and I would consider it to be one of Disney’s better ones. One of these days I ought to write an editorial ranking them all but there have been so many Disney princess stories that I’ll need to make sure I have them all straight. I’m still waiting for a big crossover film someday. They’d probably have to stick to adding maybe 6-10 in order to keep the story focused but I’d definitely be game for that.

Overall, Tangled is definitely a quality film and one worth watching. As always Disney has constructed a solid cast around Rapunzel and the film is enhanced by the solid song selection and good graphics. This is a nice story from start to finish with a good focus on the plot and solid pacing. Rapunzel herself may come across as a little slow on the uptake at times but since she has grown up in a super limited environment by a character who is known to be cunning then it does make a certain amount of sense. You can only do so much when put into a position like that. I’d definitely be up for a full sequel someday. There’s definitely more that you could do with this franchise.