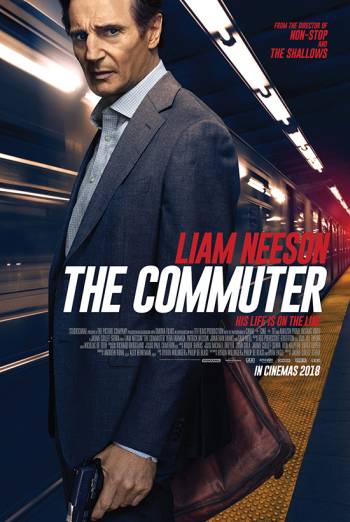 It’s time to take a look at a fairly recent thriller film. At least to me films from 2018 still feel very recent. I remember the trailer for this one looking pretty solid at least. I’m always up for quick thrillers with a mystery angle and having it on a train is always a good idea. This isn’t really anything you haven’t seen before but I still thought it was fairly great. There’s a good amount of replay value here and the writing is definitely up to par.

The movie starts by introducing us to Michael. He’s had a pretty good career and a solid life. He has a complete family and has gone on the same commute to work for so long that he even knows all the regulars on the train. One day he is suddenly fired with no real reason behind it. This comes at a pretty tough time since now he won’t be able to pay for his son’s school and the family were just skating by financially. He doesn’t tell his wife what happened yet and boards the train. That’s when a lady named Joanna shows up and insists on talking with Michael. She gives him an offer. There is 25000 dollars hidden in the bathroom that is Michael’s to keep as long as he finds someone on the train who doesn’t belong and puts a tracker on them. Additionally, he will be paid another 75000 after doing this. She dashes out at the next stop.

Michael ponders the offer a bit and decides to take the money while not doing the job. He is prevented from leaving the train though and warned not to tell anyone or it’ll be game over for him. Michael may be a regular but can he really identify one person in a train this large? One thing going in his favor is that the person he is after won’t be getting off until one of the last stops and he has until the stop before to get the job done. If he doesn’t then his family is forfeit but if he does this then does that mean that the person he tags will be doomed? Trading lives is not something that you’re supposed to do and Michael has gotten himself into a jam.

You can definitely fault the lead a bit here for entertaining the offer. If he wasn’t willing to commit this crime then he just should have left the train or stayed aboard and done nothing. (The latter may not sound smart but if you never go to check the bathroom you’d just assume the person was crazy right? He probably would have still been doomed with the latter option but he wouldn’t have done anything wrong) Trying to grab the money and leave is still pretty bad. At best you’re trying to cheat some criminals but at worse you’ve just become an accessory to murder. You don’t want to be accepting blood money right?

Most of Michael’s moves are pretty smart in the film otherwise. He does a good job of limiting the suspects while also trying to contact the cops and his family. He handles the situation like a pro after the opening act and it makes sense since he’s Ex NYPD. His only really sloppy scene though is how he tries to exit the train. So, what he does is he waits until the very end when everyone has already left and then tries to exit. Naturally the villains notice and stop him. My question is…why wait until everyone is already off? Wouldn’t it be better cover to exit along with everyone else? It would have effectively been impossible to stop him. I’m sure they could have still coerced him back in with a phone call of his family or something but it would have been difficult to do that in time. If he left with the crowd he would have gotten away completely and it was the one scene in the film where I raised an eyebrow at him. Otherwise he did well though.

It’s always interesting to see the main character get involved in fight scenes now since he’s so much older. The film is definitely playing it out as Michael being too old to really engage with someone in a 1 on 1 fight. He tries his best but is on the losing end of each encounter here. It makes sense that he wouldn’t be able to beat someone who’s probably around 20 years younger than he is. It would look worse for the young guy as opposed to being a really good thing for the lead. Still, that’s where creativity comes in and Michael did good in still putting the scanner on during one of his scuffles.

As for Joanna, I have to admit that I expected her to have a much bigger role. The circumstances of what is going on with her character remain a mystery to the end. She makes for a fun villain but I have to admit that keeping her on the train the whole time may have made for an even more enjoyable mechanic. Of course, it would be difficult to do that without writing yourself into a whole lot of trouble so I can understand why that did not happen. There isn’t much of a supporting cast otherwise. You’ve got the various guys on the train and Michael’s friend from the police. That guy is around for the occasional call. Otherwise Michael is effectively on his own here. The various train characters are pretty fun. The best one is probably the insurance agent. I liked his confidence and how openly antagonistic he was. Naturally he’s not the kind of guy you want to be sitting next to on such a ride though. He’s better in a film like this than in real life.

Overall, The Commuter is a pretty fun film. The movie makes the most of the limited environment. I’ve never been on a big train like this one and have never had any interest in doing so. I came close once but the train derailed before I got on so that’s one ride I’m fairly glad to have missed out on. The characters are good and the writing is on point. The film is a thriller with mystery elements thrown in which is a pretty great mix. That gives you all the elements you need in order to construct a solid story. The movie isn’t super action packed or anything but you do get the occasional fight scene here. The climax is pretty intense as well. You may question the likelihood of some things occurring or nobody noticing things in other moments but this film did a great job of covering its bases. It’s hard to be 100% at any point but this film comes really close and even if you have some questions, I don’t expect any would be major or actually feel like plot holes. You could put in a reasonable explanation for what goes on. I’d definitely recommend checking this one out.