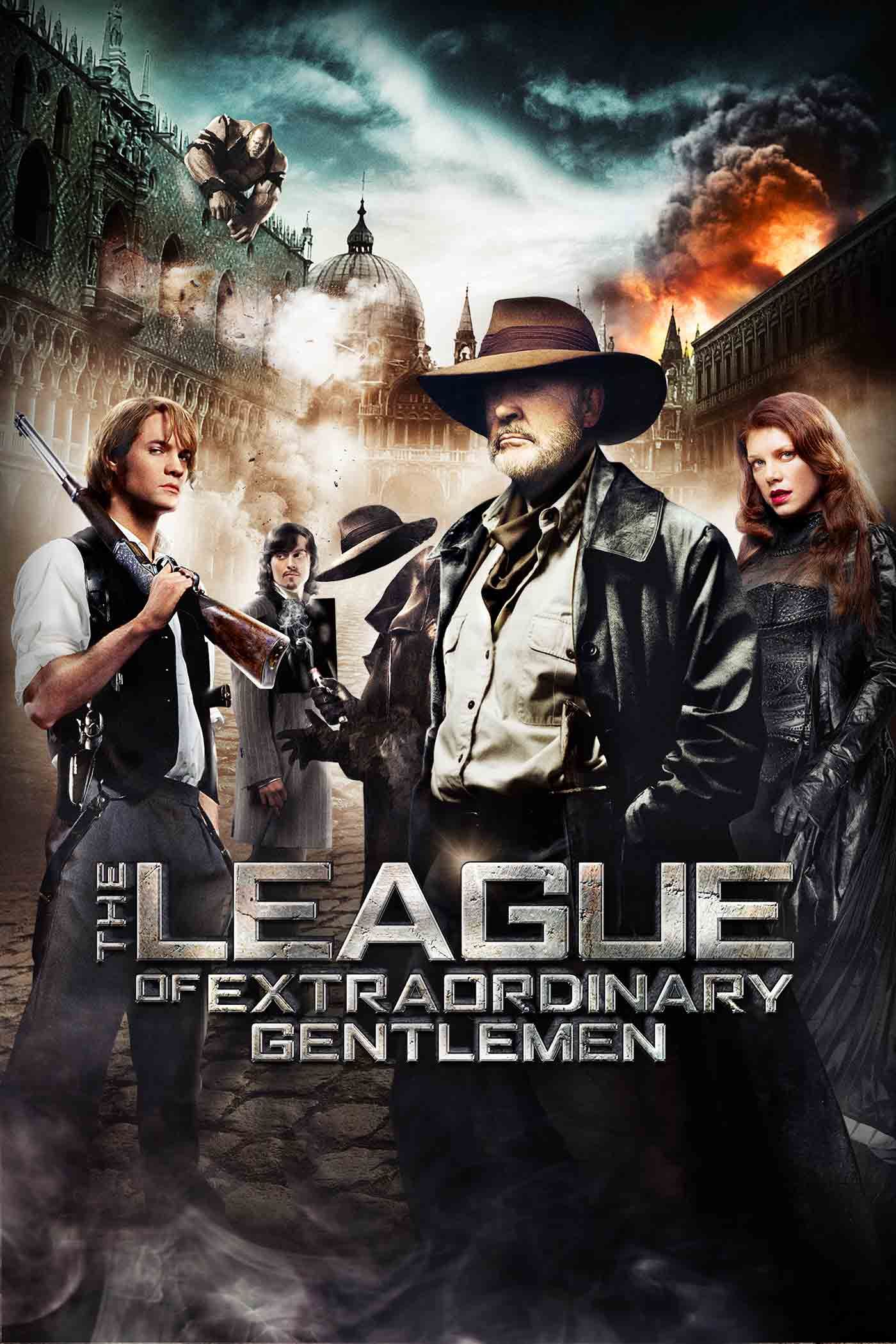 It’s time to look at a comic book movie. It didn’t exactly get the same amount of fanfare as something like Spiderman or Superman, but then again..why would it? This film is based on a comic that isn’t super well known or anything. The poster’s pretty cool though and the concept is interesting. I wonder how many people would have really noticed its arrival though. The whole thing felt rather low key to me. It’s a fun film, one that certainly could have been better but it should hold your interest. It looks like a sequel is doubtful but if we ever do get something more in this series there’s a lot they could do with it.

The movie starts with the government approaching Quartermain and asking for his help. Someone is trying to start a World War by bombing different countries and blaming each other for it. Quartermain doesn’t want to get involved as he’s tired of fighting for the country but a group of gunmen show up and murder his friends so now it’s personal. He heads back to base where they have rounded up a group of the toughest fighters on the planet. This exclusive group is made up of Quartermain, the man who cannot die while in Africa; Captain Nemo, the greatest sailor who ever lived and who has access to boats that should not exist yet; Mina Harker, a vampire who possesses the ability to transform and also has regenerative abilities; Skinner, The legendary Invisible Man; Dorian Grey, A man cursed with complete immortality as long as he doesn’t look at his picture; Dr. Jekyll, A Man who can transform into the beast known as Hyde.

Together this group must team up to stop the villainous group led by Fantom. The tough part will be getting along with everyone as they aren’t exactly used to working as a team. Most of these guys are loners and have done a good job of saving the planet on their own. Why should they want to play second fiddle to someone now? It’s part of what I always love about crossovers. When you crossover characters who are from stand alone adventures it offers a lot of promise for various team dynamics because by nature they shouldn’t want to be on a team. This film doesn’t really go into that much though apart from some opening banter with Quartermain and Nemo. The rest of the group seem to just ignore each other for the most part and focus on the mission. That’s nice and all, but I would have liked some more banter. I think the film could have gone really far with that.

From the lore I’m familiar with most of the characters but not really with Mina Harker. We definitely needed someone from Dracula’s camp to fill in the ranks though so she made sense. Adding in a Mummy would have been nice too but as it is I suppose the team was pretty large. Let’s start with the positives here first. The action scenes are definitely pretty solid. The opening gunfight was pretty good as Quatermain had to deal with several enemies all at once. It’s a simple fight next to most of the others in the movie but did a good job of showcasing his skill with a gun. He’s definitely well ahead of Tom in that regard.

The effects are also pretty nice in general. The film uses a lot of darker environments like something out of Man of Steel or BVS. The solemn atmosphere works pretty well with this group as none of them are known for being particularly cheerful. At most maybe the Invisible Man and even then I wouldn’t say the guy is always laughing or anything like that. Everything is rather grayscale so there’s not much time for vibrant colors but none of the characters really have a moveset like that so the film’s not missing out on a whole lot this time. I also appreciated the city landscape.

One of the weaker parts of the film is Skinner though. Naturally he uses his invisibility to be a little cheap at times and I’m surprised Harker didn’t just rip him to shreds after his whole scene. He allows himself to be manipulated rather easily and vanishes for large parts of the film. Given how he was handled I think the character could have easily been cut out. Realistically he just should have been given a much better role though. As always, I wasn’t a huge fan of the vampire stuff though. The drinking blood scenes are always rather gruesome and not really my thing. The battle of regenerations with Dorian and Harker was also intense but not nearly as interesting as it could have been. I also feel like the last person you should ever turn your back to is someone who keeps on saying that they have the ability to regenerate wounds. You know….it just doesn’t make sense to do that.

At least Quatermain makes for a solid main character though. He’s got experience and seems like the perfect guy to lead this group into the fray. He may be rather normal next to the others but he’s a crack shot which is what counts. The film could have maybe picked people with different abilities though. Quatermain, Harker, and Dorian all have immortality. The only difference is that Quatermain’s only works in Africa, Harker can also transform, and Dorian’s regeneration is close to instant. In a fight Dorian would definitely demolish the other two to be honest. The weakest member of the group is Tom though. He’s an American Agent here to watch over everyone and help to stop the war. He crushes on Harker (Like almost everybody in the film) and that’s really the extent of his character. He was never all that interesting.

Nemo’s a good character. It is interesting to see him as a hero since apparently he was a villain for a while. He certainly doesn’t do anything villainous here though so I guess he has completely turned over the new leaf and is not looking back. Harker’s motivations in this mission seem a little smaller than some of the others to the point where you really have to assume that she is doing this out of the goodness of her heart. If that is true, well that’s definitely really nice of her. I can certainly say that not everyone would do that. That being said, she doesn’t seem super nice like that so it would have been interesting to have given her more of a plot.

I already talked about Skinner so lets move on to Dorian. He’s a pretty interesting character to be sure. He has a history with some of the other characters and never really looks all that concerned compared to the rest of the cast. Why should he be right? Dorian is effectively invincible. Nothing can harm him for very long. He has quite a large role in the film and it’s a pretty pivotal one. Finally, Dr. Jekyll rounds out the group. I’m not typically a fan of his character and this film didn’t really do anything to change that for me. He’s still the same ole scientist as always and his Hyde form is all brute strength. I guess I wouldn’t say he’s that bad, he’s far better than his film appearance at least. Still not my kind of character though.

Fantom is the big villain here and he looks good. He has a big twist at the end that I thought was brilliant and makes him more memorable You have to give the guy credit for always being at the right place at the right time. I was not expecting him to corner the heroes 20 minutes into the film. it feels like they barely leave the base before he’s already there and ready to mock them all. I suppose he expected things to play out a certain way based on scenes later on but otherwise it’s definitely an interesting moment to be sure. The plan is one of those convoluted ones where you feel like he could have done things in a much easier way but I suppose he got greedy and that is definitely a trademark for any villain.

Overall, A lot is definitely going on in this film. It can get pretty convoluted and messy but that will keep you engaged. It’s also a good way to mask the fact that the characters aren’t always very interested. By having everyone run around you can help disguise that. In the end this turned out to be a pretty good film. As I said it could and should have been a whole lot better than it was but I was still satisfied with the end product. At the very least it still delivered on giving us quality action scenes and that good crossover appeal. I like seeing various characters interact with each other and a crossover of iconic public domain characters is a good way to go about it. (At least I’d assume most are public domain at this point and Skinner was a good loophole on the Invisible Man) If you like action films and know these characters from your childhood it should at least be a nostalgic watch.