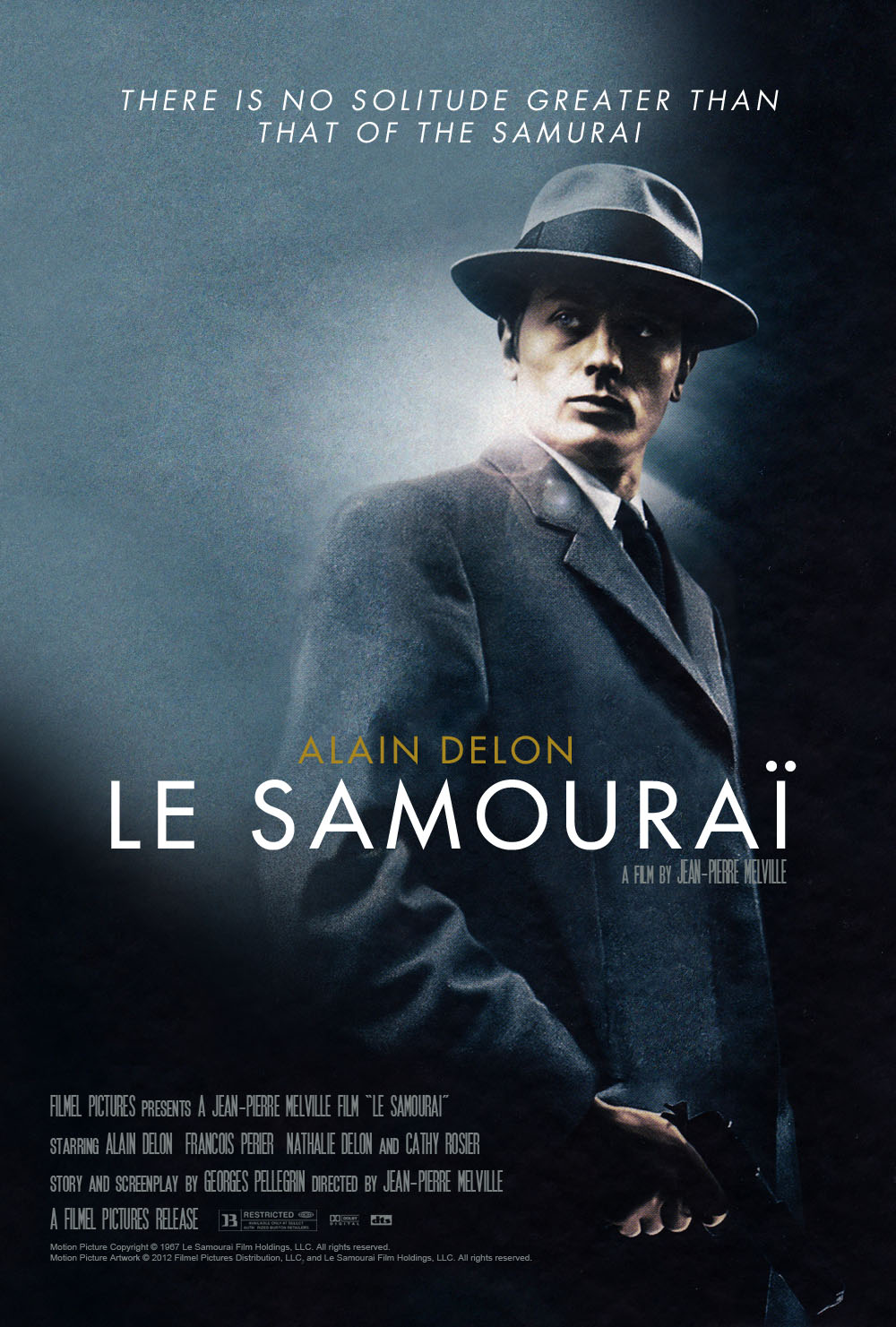 It’s time to look at a French thriller from a while back. The title may be a bit misleading though. I suppose it’s using the Samurai term more figuratively than anything but if Jef thinks of himself as a samurai then he’s quite mistaken. He’s just a common murderer trying to evade the cops long enough for the next job. This film was better than I had expected and gives a pretty satisfying case for you to watch unfold. We know that the main character is guilty so the suspense is in seeing how the cops will be able to arrest this guy.

The movie starts with Jef walking into a club. He nonchalantly walks all the way over to where the boss is and shoots him in front of everyone. He then returns to a Poker game with some of his associates. The cops quickly arrive and take him in as a suspect along with 99 other people. Jef manages to get out of there without being seen as guilty since most of the witnesses were unable to ID him. His bosses don’t like the fact that he was caught at all though and decide to put him down. Meanwhile the Policeman in charge of the investigation is confident that Jef is his man. He wasn’t able to prove it quit yet but he is determined to get the information so he has the Police tail Jef. Jef must now shake the mafia and the cops if he is to get out of this in one piece.

When your main character is actually the villain a film always has to walk a pretty fine line. It shouldn’t bother with trying to make the lead likable as it is far too late for that. The only option left is to have you root for the good guys here to take down the lead. You still need a lot of twists and turns involved here to keep things from being too easy though. It’s definitely interesting seeing this from the villain’s point of view and this movie makes the most of it. The police are given a lot of credit with the various tactics they use to try and catch him. Both sides look intelligent and have a lot of different plans at the ready. The excellent writing is part of what sells this film.

The Police chief instantly became the best character after just a few minutes with his character. He’s very sharp and has a good intuition. He plays things by the book and ultimately doesn’t cross any lines in trying to get his man. He just knows how to run an investigation and cover all of the bases. Tailing someone is pretty difficult, especially someone like Jef who is a professional but the unit here is quite good as well. Throughout the film the chief continues to pour on more and more pressure so that Jef will inevitably make a mistake and then they can slam him with everything they’ve got. Now that’s really high quality Policework.

As for Jef, he’s just your average hitman. He was paid to take someone out and he did. The piano player Valerie questions why he would do it and he even explains that his targets may or may not be good people. It doesn’t matter to him, he just wants the money. Valerie’s character is an interesting one since Jef has some theories on her but the film never goes out of its way to tell us if we should believe him or not. I’m inclined to think that he is right based upon the final mission of the film though. She seems to be a loose end which would support his theory but was definitely an interesting character either way.

Jef plays the situations rather well for the most part although the final scene wasn’t a good play. This is intentional as it seems he wanted to stop causing trouble for someone but after going through all of this that just doesn’t seem like the way to go about things. If anything it puts the heroine in some more trouble since this doesn’t really help her case. Jef’s character is very robotic in how he goes about his business. Even by the end of the film we really don’t know almost anything about his character and that’s good with me. The mystique behind everything going on is part of what makes the Noir genre so much fun.

The heroine Jane is also interesting. She’s definitely very loyal to Jef and that’s part of the tragic element here. It’s always a shame to see a character like that get in with the wrong crowd. That said, it’s not like she’s a good person either. It seems like she is playing the field and turns out to be as much of a crook as Jef. In a way that makes them perfect for each other and cuts the sympathy points down even further for both of them. There’s never any doubt on your side as to who you should be rooting for. So that’s a good thing, the writers knew what they were doing.

it’s also just a very fun movie to watch because you get a good understanding of the police procedures in France. It’s a little different and very methodical. I liked seeing them try different experiments like having the suspects switch clothing and line up. The chief definitely was very thorough in the measures he was using and it’s easy to see why he did so well. I do think the audio bug was a super longshot that was never going to work but I suppose he had to at least give it a try right? It’s not like there was much harm in the attempt since Jef was on guard anyway. There were also quite a lot of agents running around which was fun to see as they tried keeping tabs on him.

Overall, Le Samourai is definitely a solid film. It’s a low key thriller so don’t expect a lot of shots or anything like that. It’s more of a mental thriller as the characters play cat and mouse with each other. The police chief knows Jef is the guilty party but he does need solid evidence in order to convict him. That’s why Jef is able to be quite cocky about the whole thing since the alibi is so air tight. Then we’ve got his revenge trip on the mafia group. Their agent looks pretty naive the whole time so I assume he was new to the force. Otherwise he just looks awful in one scene that occurs. You may chuckle at that moment even if the rest of the film is super serious. The ending is also satisfying which is the right way to cap things off.