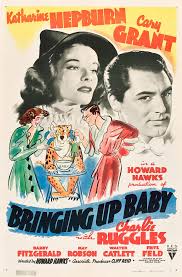 It’s time to look at another crazy comedy with Grant at the helm. It’s a bit weaker than his other ones mainly due to how slow on the uptake the main character is and the heroine not being very likable but it does still have that crazy charm which keeps it in the green. If you’re up for a lot of madness and watching a guy wreck his life throughout all of this, you’ll need to check this one out.

The movie starts with David working on a giant dinosaur. His life has been going pretty well lately. He is slated to finally marry his fiancé tomorrow and the final bone for the skeleton arrived after 4 years of excavating. Now the only thing left to do is to convince the rich millionaire’s lawyer to donate another 1 million dollars to the museum and everything will be peachy. There is just one obstacle in his path, a lady named Susan.

Susan shows up while David is golfing with Mr. Peabody (the Lawyer) and steals his ball. David chases her down but then she steals his car as well. She keeps on messing with him to great effect and it’s looking more and more like the guy doesn’t have any real chance left for the grant. Can David make a comeback or should he escape now while he still can? The longer he hangs out with this girl the more likely he is to keep on ruining his life.

I should also mention that we have a tiger running around and a dog who loves to bark at everything. David was already not very good at trying to finish a conversation and now he really has no shot. While he can be a fun lead, it’s hard to sympathize with him all that
Much because he makes a mistake on just about everything he does. A whole lot of his problems would have been solved if he had explained things better or taken charge. Instead he often finds himself wrapped in the craziness and unable to get back out. He should have went back to resume the golf game once he got his ball back and sued for damages on the car afterwards. Even right through the film’s ending you can’t help but feel like things did not go very well for him. The ending also doesn’t make a whole lot of sense with him hiding even though right after he acts like he’s happy that this is happening. Maybe he did go crazy by the end. I don’t really think he knows what he is getting into here.

As for Susan, I didn’t care for her either. Here’s the deal, you can be a bit of an oblivious character who gets in people’s way and stay likable. There are a lot of solid characters like that. The issue is that she is a little too over the top with how she misinterprets things. In the second half of the film she is intentionally sabotaging David so that she can pair up with him but in the first half there is no indication of this. She really thinks she is in the right car and that the golf ball is hers. It can be tough to take these scenes at face value because it just doesn’t make a whole lot of sense. Either way her doubling down on all of this doesn’t help matters either. She wouldn’t even let David try to explain what was really going on. Of course this is for humor but it doesn’t land as well as it could have. Had she been an antagonistic character messing with him from the start I dare say it would have worked a little better.

It’s fun to see the little dog and leopard running around. I’m not actually a big fan of having real animals in film since you hear all the stories of them not being treated very well back in the day. The scene with the two of them fighting definitely didn’t seem very pleasant. Since I’ll never know one way or the other I’ll at least try to assume that it was okay on the back-end though. Gotta focus on the on-screen action. For the story plot, it was nice to have the dog troll the main characters in the backyard for a while. Digging’s a pretty fun sport even if my Sonic never does a whole lot of this.

We’ve also got some supporting characters thrown in near the end once David is taken to Susan’s aunt’s place for dinner. We meet a big game hunter who tries his best to make friends with the others. He was a pretty reasonable character. His animal calls were on point even if he ended up getting trolled a lot. The drunk guy was definitely out of his league here though. Having all of these characters around did help for the prison scene later on which is probably the highlight of the film. The cops show up to start dishing out arrests and manage to nab almost the whole main cast. You also can’t blame them here because the heroes were acting awfully suspicious. It gives us some back and forth and these were humor scenes that really landed. All of the scenes during the prison subplot were excellent and I wouldn’t have minded spending more time there to be honest. It was a nice change of scenery and really made the main characters focus.

As for the main plot about getting the funding, if I were the aunt I certainly wouldn’t give David the money after all that. Are you kidding me? He wouldn’t get a dime! While the circumstances did attribute to how crazy David got near the end, you can’t get past the first impression. It’s not one she would be likely to forget and then you have the rock getting thrown at Mr. Peabody and actually landing. David doesn’t even refute the charge since at this point he’s long since given up. Since nobody actually clears up the misunderstanding, most of the characters here must not have a particularly high opinion of David here.

Overall, Bringing Up Baby is a fun film that maybe overstays its welcome a bit. It probably could have been a been shorter and they would have kept the film more focused with solid jokes layered into it. The main two characters aren’t nearly as solid as some other other duos in films like this. Still, there are enough fun scenes here to keep your attention and throwing in the dinosaur bone was a good plot device. It’s the kind of film that has some solid replay value built into it with how quickly things happen. You more or less know how things are going to go down so it’s about the experience along the way. Although, I was expecting a twist where Susan was the lady giving the money away so the film threw me a curveball there. I’d recommend checking it out if this sounds like it’s up your alley.