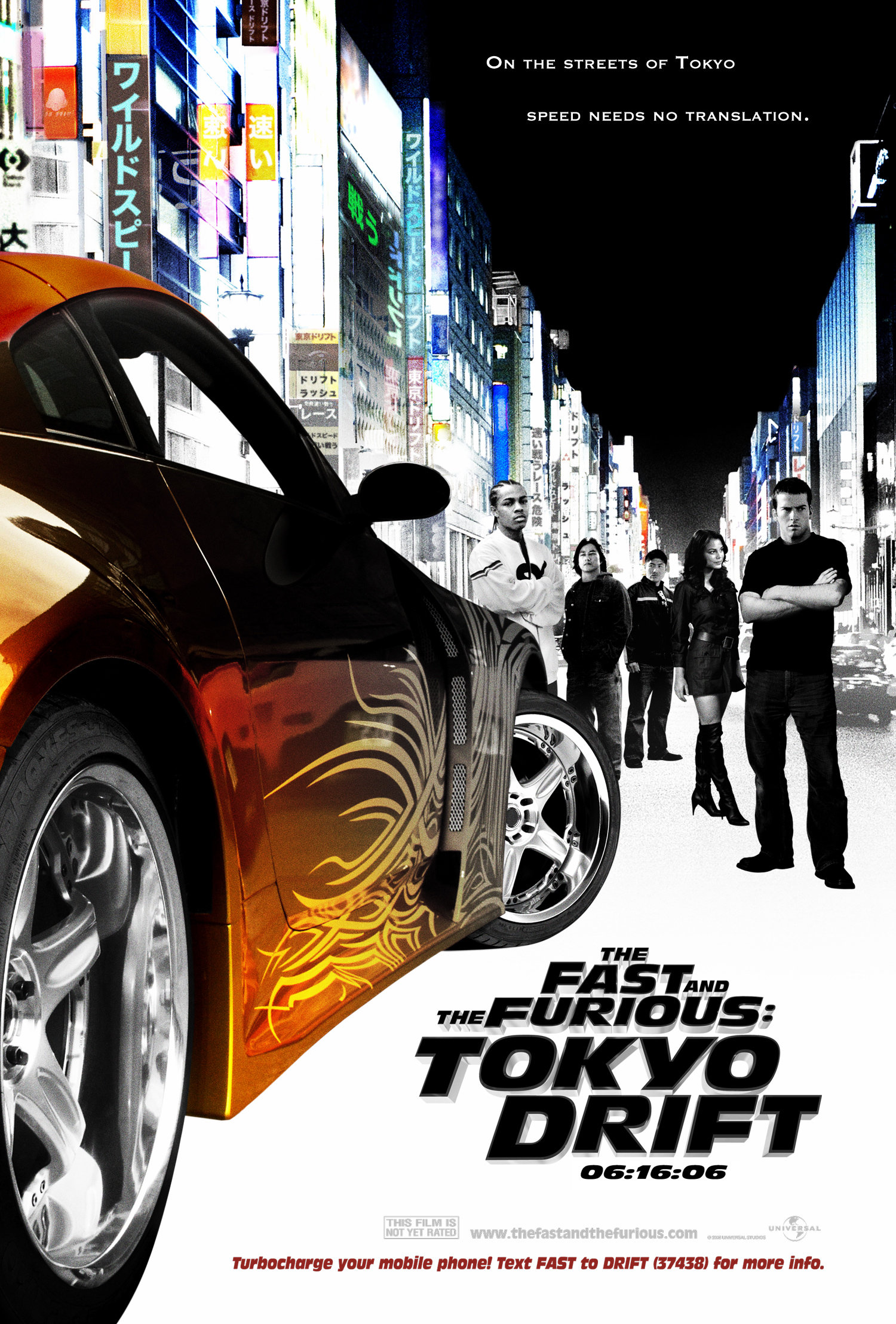 It’s time to finally take a look at the third installment in the Fast and the Furious film. Unfortunately this one just isn’t very good. It has a lot of fanservice and the characters aren’t particularly likable. This makes for an experience that’s more of a miss than it ever should have been. That being said, it has its strengths. I enjoyed the visuals and the music this movie had to offer. At the end of the day those factors are never going to be enough to make you a very good film in general, but I suppose it’s a good start so we take those.

The movie begins with Sean getting goaded into yet another race. He simply couldn’t let the bully go after having a rock thrown through the window and decides to mix things up with him in this race. Unfortunately, while Sean won the race he was still picked up by the cops. The bullies get away of course but Sean’s been caught one too many times. His Mom arranges for him to be bailed out and sent to his father in Tokyo. His father only has 2 main rules, go straight home, and no underground racing. That’s not Sean’s style though so he gets his new friend that he’s known for 2 hours to take him to the local scene. Sean gets demolished in this race and since he broke the car he now has to work for Han until he pays it back. Sean wants to pay him back but he also wants Neela to be with him and to do that he needs to humiliate DK in a race. Can he really surpass the Drift King?

When the film started the first thing I could think of was that this film seemed like more of a Need for Speed adaption than the actual film. Sean references racing for Pink Slips which is all that you do in the big boss levels of those games. Then we’ve got the whole Drifting focus here which is huge in Need for Speed. So those were just pretty fun things to note. Then you have the cops nabbing him right away too which is what usually goes down there. So, the racing scenes here are quite solid. I definitely have no problems with them. I suppose Drifting may be a little less exciting to watch than a straight race, but we get plenty of those here too so no matter which style you like, there’s plenty of fun to be had here. If you don’t like driving at all….then I can’t help you here.

Meanwhile the visuals are also really nice. The nighttime races in particular look good and it meshes well with the Tokyo environment. Tokyo is sort of like New York in how it’s always open and active with things going on 24/7. The most intense race was probably the 4 way free for all with the heroes trying to escape and being pursued by DK. It was nice because they were all just racing through the streets. There was no map, you had to drive on instinct. The final race on the mountain is also pretty solid though. As I mentioned earlier, when it comes to action this film couldn’t be beat.

I also enjoyed the soundtrack quite a bit. It’s quite different from most soundtracks that I’ve heard. I can’t speak to the lyrics as you’re more focused on the beat. At the very least the main theme really gets you set for some hype races. It’s got a bit of an ominous feel to it where there’s danger all around. If this counts as rap, then it’s probably one of the few rap songs that I found to actually be rather good. It’s definitely not my genre in general but any genre can have a good tune if you try hard enough. This song just really set the stage every time it was played. So I think we’ve got most of the positives out of the way now. I’ll also say that I enjoyed the ending stinger. I imagine it’ll be pretty annoying for people who saw this day 1 wondering when this lead would show up again though. It does feel like this was just a little tribute for the fans but it was the perfect way to end things off.

All right, so here’s where the film falters. Lets get the obvious things out of the way. First is the obnoxious amount of fanservice here. The camera zooms in quite a bit, Sean goes to various clubs and Discos that are pretty edgy. All of his teammates seem morally dubious as well. Even Han who is the most charismatic member of the crew doesn’t actually seem like a good guy if you think about it. All of the heroes here live free and loose. By that I mean that I wouldn’t trust any of them in a serious relationship for a second much less to have your back in a fight. They would turn at the first sign of danger. The romance in the movie is also handled pretty poorly. It’s hard to see why Neela would fall for Sean after everything that goes on. I suppose getting rescued in a sense by the villain helps since people can mistake gratitude for love, but then you recall that Sean gets distracted by every girl he meets and you know this relationship can’t possibly end well.

As for Sean, he’s just not a good character. I tend to like the rebellious character type but this guy takes it way too far. You’ve always got to try and hit the right amount of edge for these characters since they should still feel like a good character in general who wants to do the right thing. You never get that feeling with Sean. As I mentioned, he ignores his father and immediately goes into underground racing. It’s not like he was pressured into it or someone was in trouble. He chose to get back into the game and didn’t care about the consequences. I already mentioned how he seems to be quite flighty and goes after girls. The guy also stood around as someone got bullied. I think the film was trying to say that he would have stepped in if the hazing was more intense. He put down the wrench once he saw they were “just” spray painting him. You could also interpret it as he saw the numbers and decided he couldn’t win.

I don’t think it matters much what reasoning you chose. It’s still horrible that he let the guy get bullied like that. Physical damage isn’t the only kind of bullying there is. Being held down and spray painted all over would be an incredibly traumatizing experience. From that point it would be extremely difficult for Sean to become a likable character and he didn’t even come close to pull it off. His best friend Twinkie is a lot better in that respect. I do think it was a bit much for him to get upset when Sean came to his rescue but otherwise he’s consistently helpful. He takes a lot of risks to help Sean as well so it’s not like he’s just giving moral support. Sean would have been in trouble without him.

DK made for an intimidating villain. The guy definitely didn’t mess around and wasn’t afraid to make the fight physical instead of waiting for the race to begin. He got some good shots on both Sean and Han prior to the races. His skills were also pretty good. He may not be a real mafia member but he had the act down. As for Neela, she was a solid heroine who definitely got herself wrapped up in the wrong crowd. I suppose she underestimated how possessive DK was based on how she was acting at the start. She can apparently drive pretty well but sadly we don’t get to see her race much at all. In general she isn’t given a ton to do here but I liked her character. She had a lot of depth going for her and by default destroys most of the cast in that respect. The film doesn’t go overboard in explaining her backstory either. You understand the crux of it with the context we get.

Then you have Han who really just wants to mess everyone up. He’s fairly laid back, always eating snacks and such. The guy doesn’t really fear anything and stays smug even when he is being beaten up. You have to respect that level of dedication. He was a highlight from the start just with how he would stand up to DK and got Sean into the race. He gives the film a sense of humor as well. Again, when you think about it he’s not a great guy or anything but since he’s on Sean’s side I suppose you see him in more of a positive light than you would for the others. He’s certainly not malicious the way someone like DK is. To Han this is all just a game.

Overall, Tokyo Drift definitely takes the series in a different direction. It’s not even a bad one to be honest, the execution just wasn’t on point. I liked Tokyo as a backdrop, it’s always pretty interesting to see a different locale like that. It must be incredibly hard to transfer to a high school there when you don’t know any Japanese. That’s one area where I can understand why Sean was having such a tough time even though he didn’t exactly try very hard anyway. There are other interesting background elements as well like Sean’s father who seems like he may have had a racing background. He doesn’t get a lot of development here but has one pivotal moment with a gun that I thought was executed really well. I also like the idea of focusing the film around Drifting since it’s something unique. So many good ideas and opportunities but the film just kept on taking the worst choices and limiting its potential. I’d like to see these characters come back some day though and give this another shot. If you really love racing films then it may be worth checking out but otherwise there are certainly better ones out there.