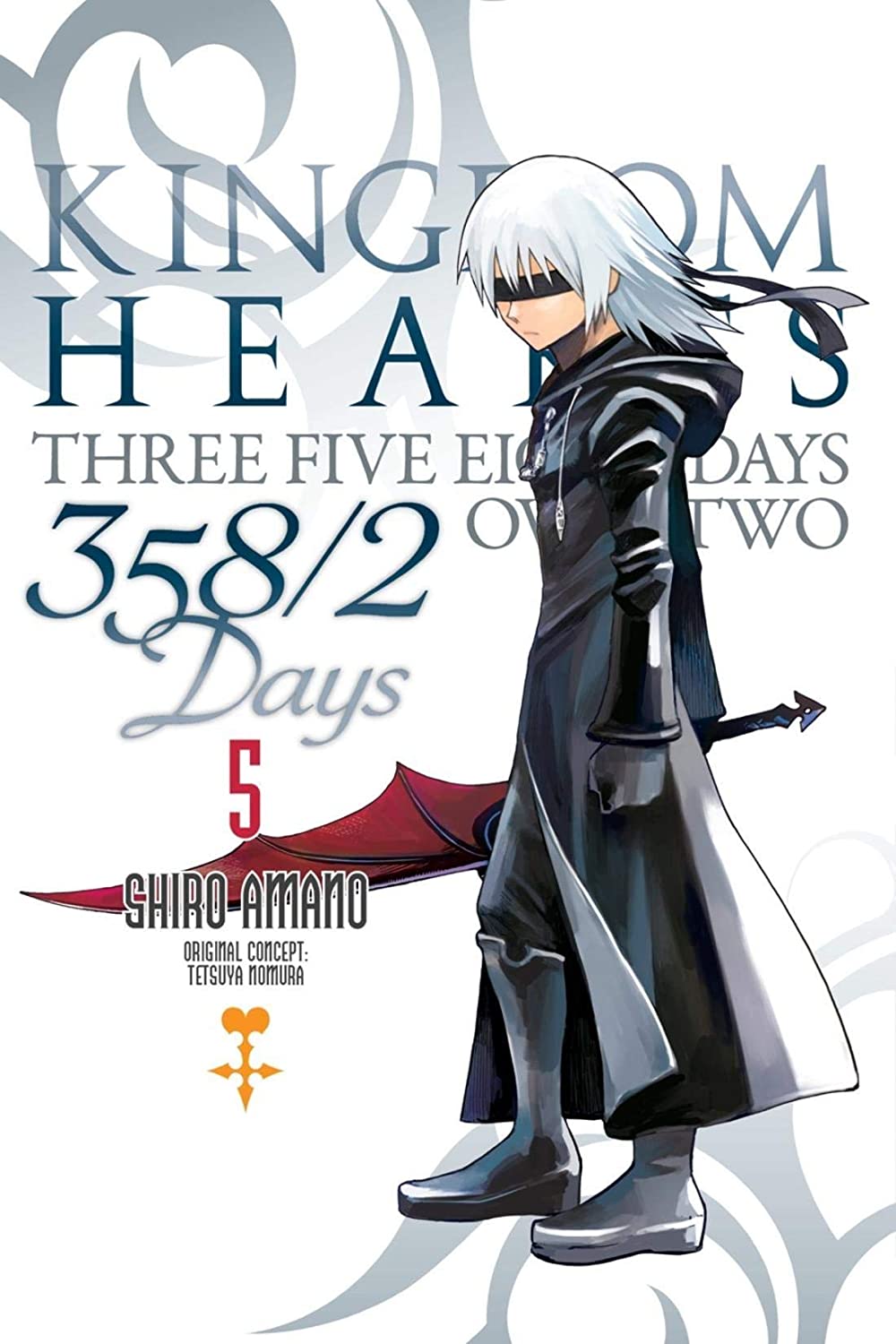 After quite a while it’s time to look at the next Kingdom Hearts adventure. I enjoyed the 358 game quite a bit back in the day. The gameplay was definitely a bit simplified but it was all very smooth. The story was also pretty intense and it was interesting to see the organization’s side of things. Roxas as a tragic story right from the start since you know things aren’t going to end well for him. It’s easily the most underrated game in the series. The manga is a pretty solid adaption of this. I’d say that it goes for a bit of a lighter tone but all of the events still happen and we even get some extra development on Xion’s side.

The manga starts with Roxas joining the organization. He is a “Nobody” a shell of a person who died long ago. Nobodies don’t have souls and thus can’t feel human emotions although they can emulate them based on their life experiences. They don’t have memories of who they used to be although they will occasionally get flashes. The mission of the organization is to gather a lot of hearts to open up Kingdom Hearts. Once they do that the goal gets a little more vague but opening up the gate will take a while as it is. Roxas doesn’t feel one way or another about the goal, he just goes ahead and does it. Things change when he starts to become friends with Axel and Xion. He begins to see the organization’s true nature and wonders if he is really in the right place at all.

Of course it is a little difficult to betray an organization when they are all that you knew. Since Roxas has a difficult time with emotions he also isn’t sure how he should feel. One thing’s for sure though, Roxas does develop a real heart by the end of all this. His adventures and emotions are too real for that not to happen. Ultimately he does choose Xion over the organization which was the right call. He’s definitely a solid character for sure. It’s neck and neck between him and Sora for who the better lead is but of course Sora will appear a whole lot more during the franchise. Roxas’ role was brief in comparison, but memorable all the same.

I get the feeling that the author really liked Riku because he looks quite solid here. No complaints from me because I do think Riku is top tier. At this point in the series he has really become accustomed to using the powers of darkness so he even wears a blindfold to increase his abilities. In this series he was actually able to take on the vast majority of the organization members at the same time which is pretty impressive. He’s definitely a fighter who doesn’t do down easily. Roxas gave him a good fight but even this guy couldn’t win in the end. It’s nice to see the original characters looking so solid.

Part of why the struggle is pretty personal here is because both Riku and Roxas are fighting for good reasons. Roxas wanted to save Xion from her deadly fate. Xion’s death would result in Sora’s resurrection but not only does Roxas have no reason to allow this to happen, Xion’s his friend. He can’t just let her throw her life away. The scales are reversed with Riku since Sora is his best friend so he mainly just wants him back no matter the cost. At least they do give Xion the choice although it’s a very pressured one so it’s hard to say how much she got to influence this. Also, Sora’s soul is large enough where Roxas had to go eventually as well.

When you think about it the plot here is actually rather dark. Perhaps that’s why the manga tries to squeeze in a lot of lighter moments to help balance it out. Otherwise this could get rather grim pretty fast. Definitely makes for an engaging read the whole time though. The manga throws you a lot of hints about Xion and her fate from early on. The organization isn’t exactly subtle about it to the point where you think they probably could have hid their intentions a bit more from Roxas so he wouldn’t stand in their way. I’d have liked to see Roxas take down the whole organization which he maybe would have done if he escaped from Riku. I could definitely see him wanting revenge here.

As for Axel, I’m not a big fan of his. At the end of the day he stood down when it counted and his secrets played a large part in dooming Roxas. If he had been more open about what was going on then perhaps they would have been able to think of a plan to escape with. Axel’s decision to keep to himself was a poor one and it’s hard for his character to rebound from it. Xion also made a lot of bad calls. She also didn’t trust in her friends enough. If she talked to Roxas more then she could have had a better chance. I have more sympathy points for her though because she’s living with a ton of veiled threats against her. She also doesn’t want to get him into further trouble. Still not a great reason to keep secrets but it’s better than Axel’s. I always thought Xion was pretty fun and it’s too bad she couldn’t appear more.

The art is pretty solid. It’s not quite Shounen looking in the sense that you shouldn’t expect any big fight scenes here. Most of the time the fights are over in a bit or two even if they are serious battles. The series juggles comedy and action so the art also fluctuates based on that. At this point the artist is pretty experienced so the characters are all looking sharp and the style is refined. I’d like to see longer fight scenes at some point but that’s more of a writing decision as opposed to having to do with the art. From the cuts we get I think the fight scenes would work out pretty well.

The manga isn’t very long so you should blast through it pretty quickly. If anything I wouldn’t have minded a longer bit based on the final act. Once Roxas finally leaves the organization for good it’s one of the more intense moments in the series. His fight with Saix is an example of a fight that could have been extended. Roxas may be relatively new to the Keyblade game but since the manga takes place over the course of a year it’s possible he even has more experience than Sora now. I’m not sure how much time passed during the first two games. Either way my money would be on Roxas to take Saix out and that would be a really grand battle. The final chapters are intense either way so you better enjoy them.

I imagine it would be pretty interesting to start with 358. There are a lot of references to older events and such so while it would increase the mystery angle it also means you will have less reason to root for Sora and friends. It would probably up the tragic angle of the series. It’s always rare to get a video game about the villains so it can be interesting to see their side of things. Especially in a case like this where the organization is evil but the younger members don’t really know better. After all, as Nobodys they don’t have a heart or any emotions so it’s a slot tougher for them to choose between good and evil. At least Roxas and Xion proved that you can get past this and generate a real heart eventually. 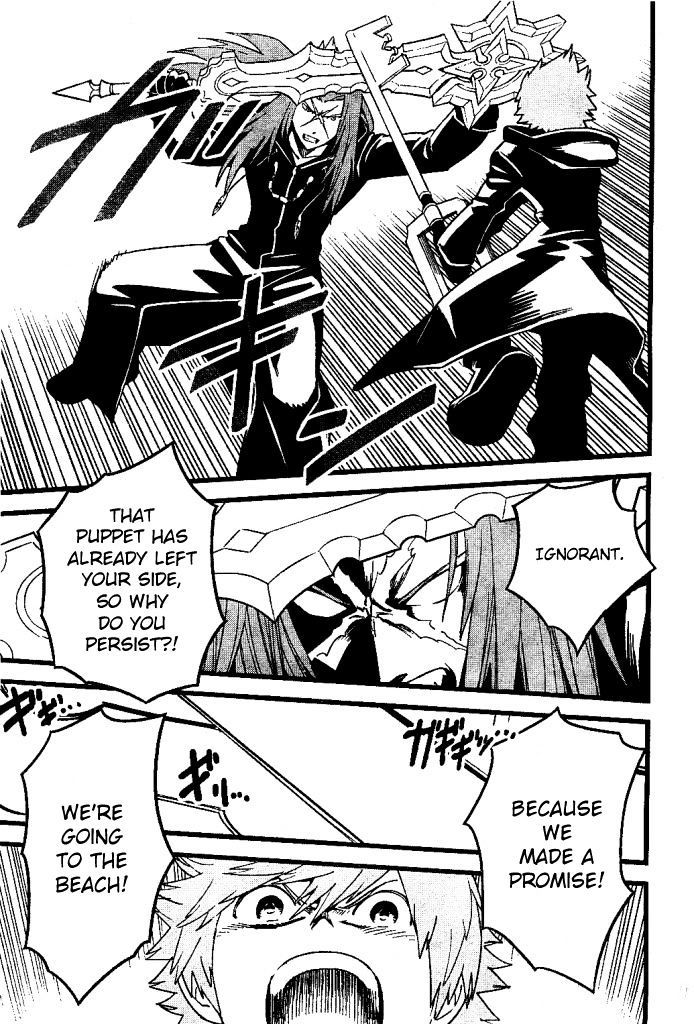 Overall, Kingdom Hearts 358 is definitely a solid title and I’d recommend checking it out. I wouldn’t go as far as to say it beats the adaption for 2 or anything like that but like the game it makes for a pretty intense story. By the end of it you will feel like things are pretty unfair for the main characters. There really weren’t many options available to them and even the heroes wouldn’t try to save them. Makes it a little harder to get out of an evil organization when that’s the case. Roxas and Xion were really left to their own devices. I think if they could have convinced Axel to run away with them the 3 could have been ok for a while but at the same time they would spend the rest of their lives looking over their shoulders so in a way it’s not like they would have been living on Cloud 9 or anything like that.