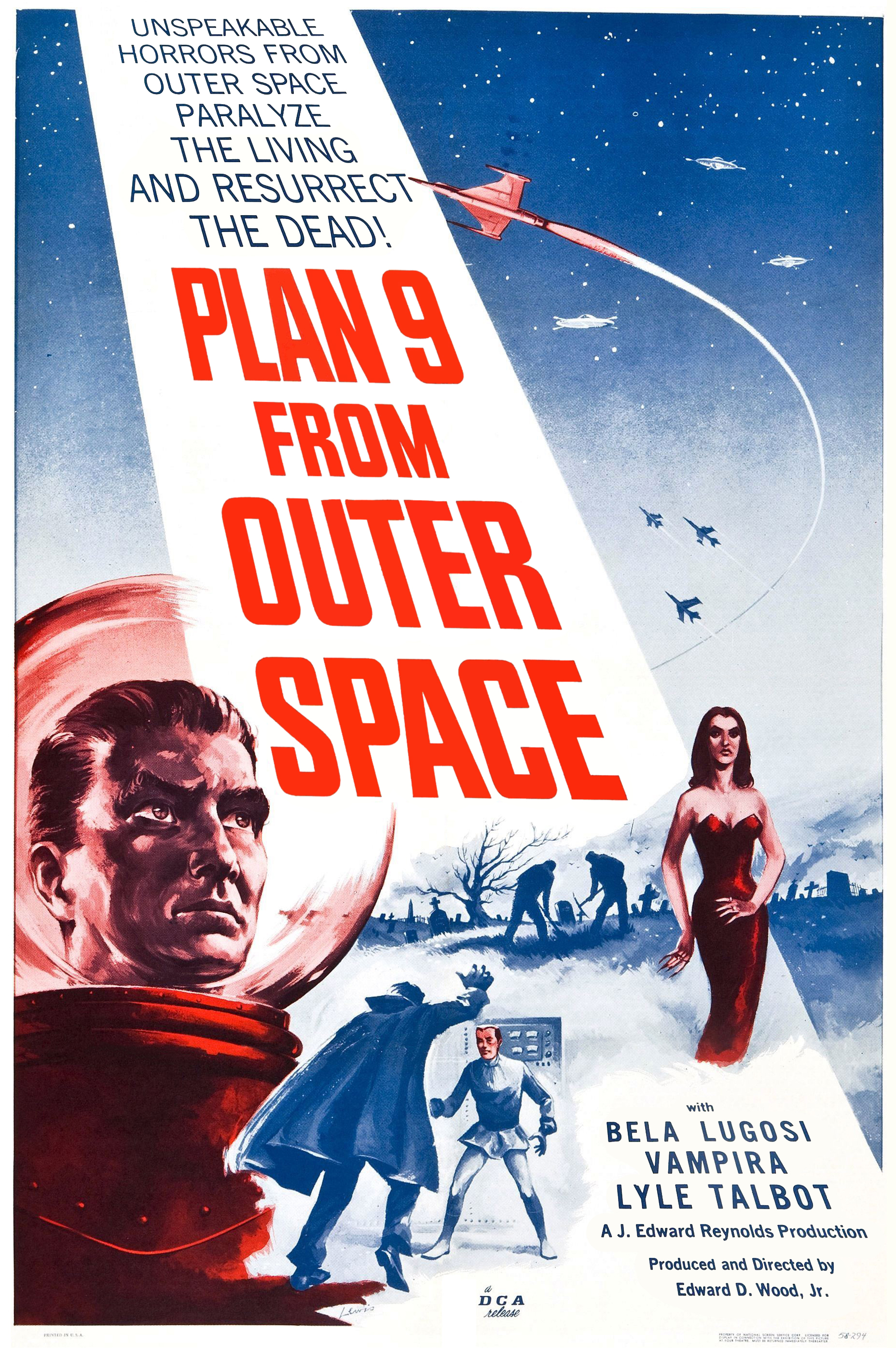 If you ever thought that having a movie with aliens and zombies would be too overwhelming for a film then this is one you need to check out. Plan 9 From Outer Space reminds us that a film can be as ambitious as it wants to be and still succeed so long as the writing is on point. The movie is fairly short but really manages to deliver on a whole lot of content. It’s a fun ride from start to finish and Inspector Daniel really ends up showing everyone how to handle supernatural cases like this. It’s rare to see a detective with such poise under pressure.

The movie starts with some people seeing a UFO as it heads to Earth. It is somehow able to bring the dead back to life and the body count slowly begins to grow. The aliens are using Plan 9 to take over the Earth. Basically what this entails is bumping off the most competent humans and then turning them into Zombies. These zombies will then crush the rest of the humans. The process of turning people into zombies seems rather quick to be honest so you may question why they don’t just turn everyone into zombies and be done with it. With their advanced weapons maybe they could just blow the planet to kingdom come right? I assume they need the planet alive since they want to take it over of course but then at least using it to take out some of the key bases. Well, since they haven’t done that, Daniel has a chance to crack the case and foil this plot.

On the surface Daniel probably seems like he’s out of his league here. He’s a tough detective who has had a long history of finding any kind of clue, but what clues will help him stop Plan 9? At the very least he never really ponders this and just gets into the action which is admirable. Pretty much any scene he is in Daniel starts pointing out mistakes others have made. The others really aren’t of any use without him and it shows. Daniel’s got to be the best character here in part because of his overwhelming confidence the whole time. I always like when a lead is decisive like that.

Not all of the characters are quite as on the ball though and I should say that despite the long writeup…Daniel isn’t the main character. He doesn’t quite last as long as you would expect. No, our lead is Jeff and he’s a pretty earnest guy. He’s certainly seen more action in the field than Daniel as a pilot and quickly gets thrown into the thick of it. If you wanted to see a human actually fight with one of these aliens mano a mano then you’ll have your chance. There is one scene in particular that may stretch your imagination though as one of the zombies heads to Jeff’s house. Keep in mind that the zombies are rather obvious since they can’t move a whole lot and have a vacant expression on their face. At most you can maybe understand his kid not realizing that something was up but Jeff’s wife should have suspected something when the guy just kept grunting the whole time. Then Jeff himself didn’t notice until he went in the car and it was too late to get out. Not very observant eh?

There’s just so much going on with a bunch of characters at the ready. As a result one of the characters doesn’t even get to say anything and he just runs around with recycled footage the whole time. It’s definitely an interesting decision and shows that the cutting floor can really change the whole feel of a character arc. The movie is pretty short at only around an hour so it’s pretty impressive how many storylines and characters are juggled. What really sells this film is the solid writing. The characters talk like a really old movie with the witty banter and iconic one liners. They all seem like reasonable people who have to band together to stop a common enemy. You can’t really go wrong with that setup.

The aliens themselves are pretty fun as well even if they do get a bit nervous at times. It’s hard to forget the scene where they lose control of the zombie and it nearly chokes them all out. If you can’t beat your own creations that’s a bad sign. It did foreshadow that they would likely have trouble against ordinary humans though. After all, if you can’t beat a zombie then that means your strength is under theirs and probably fairly ordinary in nature. Their best bet was destroying us all with technology and as soon as they did not go with that plan I knew they were going to have a hard time of it.

One last strength that the film has is certainly all of the government scenes. We see them trying to shoot down the UFO with lasers and when that fails they fall back to pretending it never happened. I always like to see the government involved as it makes everything a little more tense and professional-like. They have a whole subplot here as they try to figure things out and it makes sense since Jeff is also intertwined in that. All we needed was a courtroom scene and this movie really would have had every strong scenario from these retro movies.

Overall, This is a really fun movie. You have a whole lot of themes and genres stuffed in here. You’ve got the mystery from the humans’ perspective of what’s going on, horror with the zombies running around, sci-fi thanks to the aliens, and maybe even some drama with people coping with the dead characters coming back although this isn’t really played up. We’ve also got a fantastic climax with quite a lot of action. On one hand you’ve got the 1 on 1 human vs alien battle and on the other you have a full army war scene of the heroes fighting off the zombies. I was definitely happy to see the army getting involved. Usually you don’t see that, but it makes sense with the invasion plans in motion.