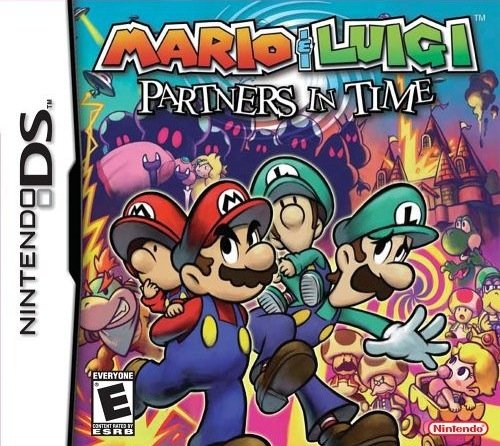 Mario’s certainly had quite a few RPGs over the years. It’s always been interesting to see Nintendo balance having both the Paper Mario series as well as the M&L titles. It used to be that the former would have the darker plots while M&L would have the hype dialogue. Gradually the Paper Mario games turned into the more fun titles without much of a plot and I’m not deep enough in this franchise to see if it’ll go the same way. Well, this is definitely a fun sequel and I would put it above the first game. The story is a little on the short side for an RPG but at around 15 hours I can’t reasonably say that it’s super short either. It’s long enough and gets the job done.

The game starts with the team deciding to time travel to the past for fun. Apparently that’s the kind of thing you do when you’re bored now. Peach heads to the past but when the time machine returns there is a monster in there instead of Peach. The Mario bros are able to barely take him out and head to the past. There they are quickly defeated by the Shroobs. Fortunately they are saved by Baby Bowser as well as Baby Mario/Baby Luigi. Now these guys are going to need to team up to find out where the present Peach is and save her. The stakes are high because this group is also looking to conquer the kingdom in general. They already own the Mushroom Kingdom in the past and Mario must now stop this from happening in the present.

Of course along the way a lot of hijinks ensues and you know Bowser will want to have a word in. Surprisingly Bowser’s role here is rather small. He gets a solid role at the end of the game though which was pretty tense. I was definitely not expecting things to go that way. The game does not disappoint with the climax. It’s pretty high-end as you would expect from an RPG experience. The boss has more than one phase and it’ll take everything you had to win. The game is rather difficult if you don’t stop to get some extra level ups along the way. I spent a few hours just going back to get level ups and the final boss was still pretty tough.

The best advice I can give it to really spam the Copy Flower and the Mix Flower. These are really your best options if you ultimately want to score the win. You can deal hundreds of damage just by using the flower once and at the same level my standard attack would do around 70. I don’t see how you can beat the final bosses without these items. I ran out of items the first time I tried to challenge the final boss and ultimately that put me in a real spot. I wouldn’t lose since I was good at dodging the attacks but I couldn’t deal enough damage to ever win. See, the boss has 3,000 HP and she is protected by a lot of other parts. The idea is to destroy the shields and then attack her but the shields regenerate every few turns. So by the time I would destroy 2 shields another would pop up so I would never get to the actual villain. You need the items for this fight. I can tell you that right now.

Also, it’s important to use the roulette to increase other attributes. Initially I was putting everything into Health but I didn’t realize that the roulette gets worse and worse if you focus on just one stat. You’ve got to increase them all to really put yourself in a good spot. It’s the only way to get far here. I recommend always increasing HP, Attack, or Defense. They’re the only 3 stats that really matter if you ask me. Earning XP isn’t super easy in this game though. Enemies don’t respawn unless you time travel so it can take a while to get anywhere. Additionally the EXP amounts just aren’t great. I beat the game at Level 25 and just getting to that point took quite a long while.

The gameplay is classic turn based although it’s fairly interactive. Pressing buttons at the right times will allow you to extend a combo or deal extra damage. You are also given the option to dodge enemy attacks if you time the buttons correctly. It’s a nice little touch that keeps you sharp the whole time. You can’t just space out as the enemy uses their moves. It’s not quite as crisp as your average RPG but I’ll give Nintendo props for keeping things different here. I do think it’s a pretty good idea.

As for the graphics, I’d say that the game looks pretty clear. The character sprites are on point. The animations are a little limited along with the sound effects so you’ll see and hear the characters do the same things a lot but at the end of the day it always feels pretty in character. The soundtrack is okay but the game was really lacking a danger theme. As a result even during the really serious moments you would have a happy theme play and it could dampen the mood a bit. The game could have really used a dark theme or something with a little rock for these moments.

There isn’t much replay value in this case because there isn’t anything to do after beating the game. You can earn more level ups I suppose but there isn’t much of a reason to do so with no post game. It’s short for an RPG as I mentioned but you can get it for a decent price nowadays and 15 hours is nothing to sneeze at. Additionally, the game is just a lot of fun. The dialogue is on point. Now, Luigi does get thrown into the dirt quite a bit as the series always love making fun at his expense. If you’re a big Luigi fan then this could be a rough ride for you. For the most part it’s all done in good fun but you may have doubts.

Overall, Mario & Luigi Partners in Time is a solid sequel to the first game. I thought that the story was a little better and I do love time travel adventures. It’s not a game that will stick with you for long as it’s off to the next thing right away but it’s a solid title nonetheless. I look forward to playing the next one soon. I feel like back in the day Bowser’s Inside Story was known as the best game in the series so I’ll be interested in seeing if that’s the case. I’m definitely expecting another really solid adventure. Mario hasn’t let me down before and I don’t expect he’ll start now.