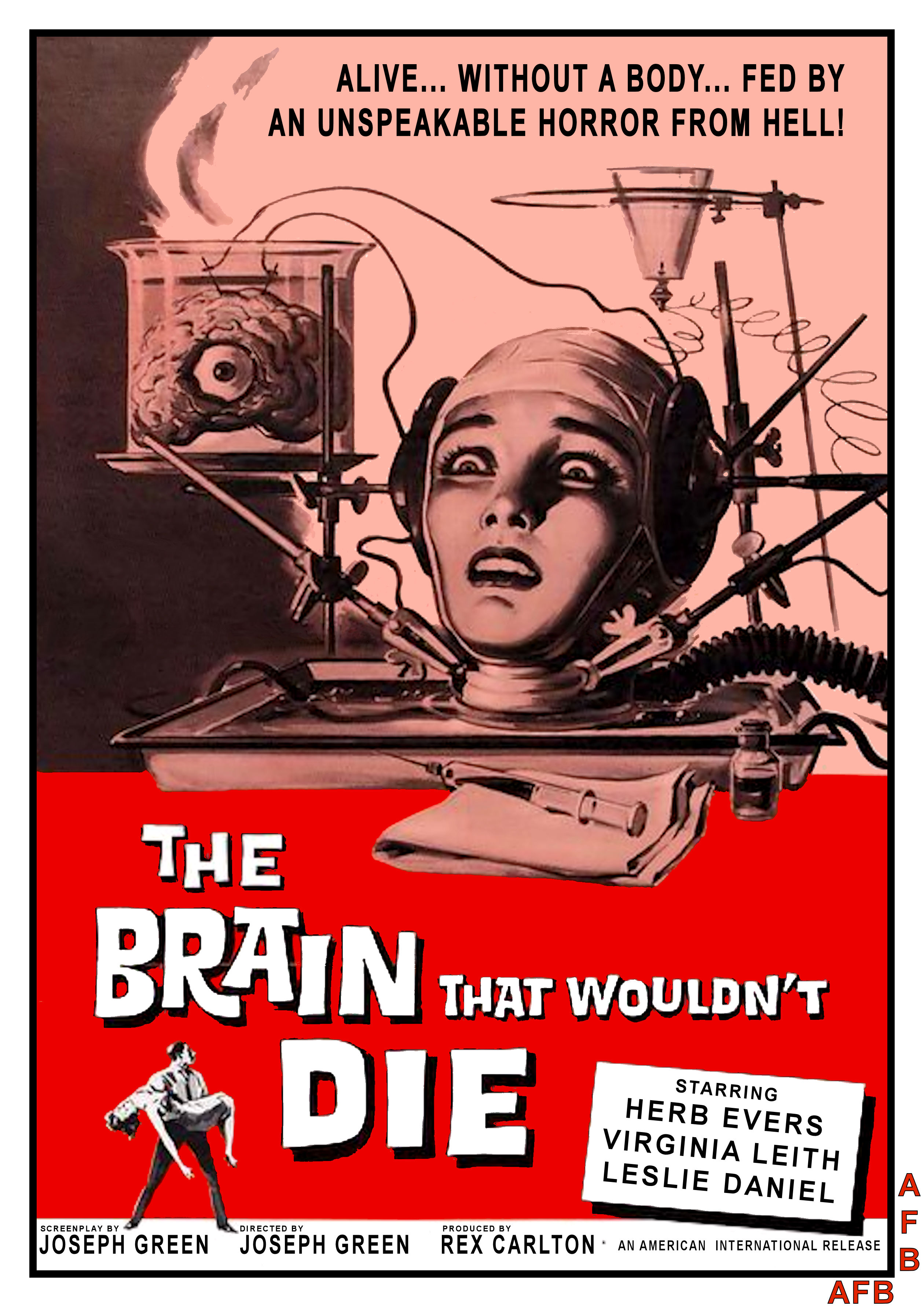 Storing brains by themselves is always a recipe for disaster. Usually you’ll end up bringing back a zombie or a monster or at least the odds of that are far greater than the odds of bringing someone back in one piece. It’s just not going to happen and while a single head may sound like it should be easy to defeat, you really can’t underestimate these villains. This film’s not very good. It can be cheesy at times with some good dialogue but it just makes a lot of mistakes along the way. There’s not really much of a cast to root for here and the film made a mistake that I never thought I’d see. It’s a short film that actually drags on quite a bit.

The movie starts with Bill managing to save someone through the use of a brain transplant. His father doesn’t approve since this is really outside of the books but Bill doesn’t care. He speeds a little too fast in his car and ends up getting his girlfriend Jan murdered. He’s able to grab her head which fortunately popped out smoothly and then gets her into a jar. He aims to put her head on someone else’s body and then stitch it together. The tricky part is going to be finding a body so he decides to just find some girls and will pick the best one. Can someone stop this madman before it’s too late?

So I’ve got a lot of problems with the film but my only real question is where did the monster come from? It just feels very out of place and random. I don’t believe it’s the guy from the first operation because that would just make absolutely no sense. How would that guy have gotten downstairs and how was he so deformed? So it seems like this is an unrelated incident and in that case how did Bill not know about it? His sidekick Kurt had to tell him about it and while Bill was surprised, he didn’t seem to care a whole lot because he was just too busy. So where did this monster come from? The film doesn’t seem too care too much but it just did seem out of the blue.

This is the plotline that drags on a lot though. The film is under 2 hours but there are so many scenes of Jan’s head talking to the monster while he beats on the door. A lot of these scenes are basically identical and they just keep going back and forth over and over again. The payoff isn’t until the final few minutes at which point it’s just too late. Some of these scenes could have been cut and nothing would have changed. Bill definitely looks pretty bad though considering there is only one way to get in range and that’s to walk near the window. He did see the body next to him right? Definitely not a good look but it’s not like he was someone to root for anyway so I was pretty okay with this.

Bill just makes for a poor antagonist. Most of his scenes are just him oogling different characters as he chooses his next victim. He flirts quite a bit although he claims his whole goal is to bring his girlfriend back. The whole thing is pretty suspect at best, it’s not really even bringing Jan back at that point since the body will be completely different. I’m sure there are debates to be had on that but either way he’s a pretty unrepentant murderer. It’s also a shame since the heroine at the end already had a hard time trusting people. This is definitely not going to help that in the slightest. So the film’s got a pretty lousy main character and an excuse for random modeling shows and some fanservice. What else is there for the film?

Kurt’s pretty crazy. He tries to tell everyone that he’s not afraid of anything but he’s not even fooling himself with this. The worst part is that he shouldn’t be afraid. Why be afraid of a severed head? I can see him being afraid of the monster. Sure, that makes sense but Jan? Jan did undergo a complete 180 in terms of personality when she became a head though. I didn’t realize that she would become such a fierce character, but I guess dying will do that to you. I also don’t imagine that it’s any fun to live life as a head so I completely understand why she was so upset at Bill. It’s not like he was listening to her at all so you can make a strong case that he just wanted to prove that his methods worked. Jan even had the classic evil laughter at her disposal as she would crack up quite a lot. I was glad that she gets the last word in though. The film ends abruptly but you could say it was a pretty happy ending.

The film’s pretty tame in terms of violence for the most part although near the end it suddenly gets intense. One character literally has his arm ripped off and another one gets chewed up. Those scenes were more intense than you may expect here. The creature’s design also looks pretty painful as you can tell that things went very wrong when trying to work on him. This movie could definitely get intense at times that’s for sure. It just didn’t channel that intensity into being a quality picture and ultimately that’s what held it back here. It didn’t have that decisive moment to take it to the next level.

Overall, This is not a film that I would recommend. While many films back in these days had top tier writing and plot progression, this was not one of them. It really manages to underperform in all areas. The fact that there are no likable characters in the film is already a big red flag. How can you ultimately succeed without any? Bill comes across as rather sinister right from the start as he goes in with the threats immediately and I already talked about Jan. The supporting characters like the old friend who does some modeling and the leader of the modelers were probably the best characters and it’s not like they got a ton of screen time. They were also a bit gullible with how quickly they were trusting Bill. The old friend has a better excuse then the head. The random fight in the dressing room as also as random as they come. If you want to watch a good sci-fi film then you’ve come to the wrong title. I’d recommend checking Men in Black instead.