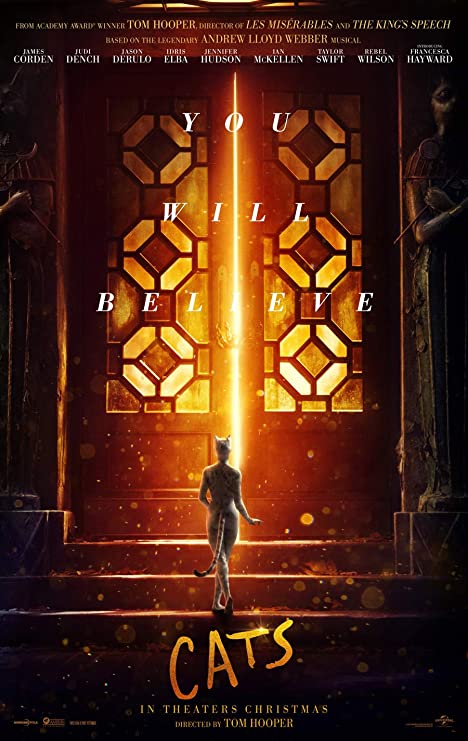 I remember this film getting a ton of buzz when it first came out but all in a negative way. The cat costume CGI looked really bad and the trailer did not look promising. The film does not disappoint in that it is pretty terrible. This movie just didn’t really have much of a chance from the beginning and it’s really not surprising. The whole concept of the film is about cats that look like people singing a lot of songs. It’s just not a very enticing storyline and the film doesn’t focus on story much at all anyway.

The movie starts off with someone throwing away their cat. Her name is Victoria and she doesn’t seem to know about much in life in general. She’s very confused and the neighborhood cats don’t seem to appreciate newcomers much. They start singing a lot of nonsense at her but eventually she’s able to glean a few things from their ramblings. Cats are supposed to all have 3 names yet all of these guys have only 1 name so Victoria safely disregards this useless information. Next up there is a competition where the Cats perform in the hopes of getting out of this place. The only way out is to be chosen as the winner so everyone does what they can to win. Victoria has been here 5 minutes and she’s ready to leave so she gets ready to enter. The only tricky part is that the rules are never really explained and there isn’t much of a bracket system either. Just run on stage and do what you can. It’s the only way to possibly win here.

Fortunately we do have a villain to give us some reasonable moments. His name is Macavity and he has the ability to turn people to dust and then transport them places. The teleportation seems to knock you out temporarily which is convenient for him. One by one he begins kidnapping all of the cats so it’ll be easier for him to win the tournament. He doesn’t have much of a point to his plan after this though. He was really hoping that they would suddenly make him the champion for doing this but unsurprisingly the cats aren’t sold. I would still have to put this guy as the best character though. He sings less than the others and makes the rest of the cats look like suckers a lot of the time which is always nice. They fall for every trap and the worst part is that Macavity can clearly just teleport you at any time. Yet he likes to troll the characters by pretending he needs an autograph and things like that.

The best part was when he is talking to Victoria and naturally she doesn’t know who he is. He drops some hints like talking about how scary he looks but she has that same puzzled expression on her face that is present for 85% of the movie. He has to literally point at the wall of wanted posters with his face on it. Keep in mind that this was present for the entirety of the scene. The gears finally click into motion for Victoria and she runs away while Macavity laughs. At least that part was funny although I’m not even sure how intentional that scene was.

When you boil it down to what’s wrong with the film, a lot of it comes back to the cat costumes. If you’re going to do a film about cats then use CGI ones or something but not people acting like cats. The whole thing is disturbing from the start and never gets any better. You’ll be wanting to roll your eyes throughout. There just doesn’t seem to be a point to most of the scenes beyond just being surreal. The designs are all rather unpleasant to look at and the backgrounds during the songs aren’t great either. So you’ve got some of the worst character designs I’ve ever seen and even the songs are weak? That’s a recipe for disaster.

The film goes for some crude scenes with the cats eating roaches and such during the early songs. Did the film really need to go there? All the scenes of them eating stuff can be pretty grotesque. For the songs the most tragic part of the whole thing may be that at times the background music isn’t all that bad. Sometimes the tunes can actually be fast and catchy. Usually it’s the lyrics that just don’t work. This musical is just a flop even as a musical because the songs won’t keep your interest. It’s all like a super long music video that isn’t interesting and the “story” of the music video doesn’t do it any favors either. That’s a really bad combination.

Cats is also just a very boring movie. With no characters to actually get invested in that already puts the movie at a huge disadvantage. Macavity doesn’t appear a whole lot compared to most so he can’t hold things up. Veronica has no real character to speak of and all the other cats seem rather shallow and mean spirited the whole time. They basically forced one cat to stay outside the whole time until Veronica saved her and helped her have a happy end to that subplot. The cats would probably be a lot happier in this place if they actually did something to improve the conditions. Instead they seem happy to mess everything up and there’s even a song about how they sabotage one family’s dinner every night. How heroic of them….

Overall, Cats is a terrible film. There’s really no question about that. The music is no good and the story is basically nonexistent. It’s a pretty basic plot. You have to win the competition and there’s a villain who wants to cheat his way to the top. There’s not much to it but the songs are the only thing keeping this from being a 20 minute film. It’s just hard to believe that this is actually a real movie, it’s no wonder that the movie lost so much money. I guess it just be like that sometimes. I would recommend watching just about any other musical over this one. Check out High School Musical instead and you’ll have a much better time.