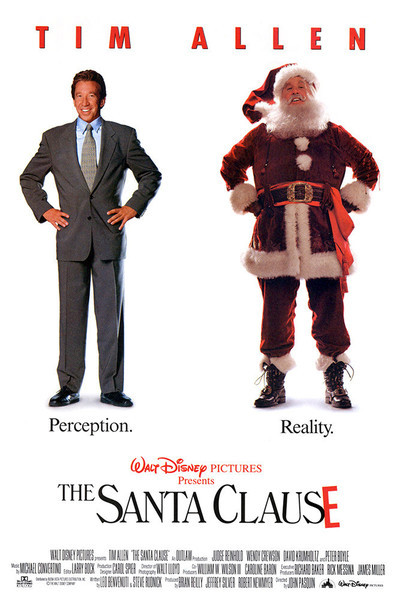 The Santa Clause film is certainly a pretty well known one from back in the day. It’s an entire trilogy now and the idea of being forced into the Santa Claus role is pretty intense. There’s a good amount of humor and fun characters here so the film stays operating as a pretty high level. In particular Scott gets a lot of good insults in against Neal which are always fun to see. That guy really didn’t stand a chance here.

This film picks up with Scott running late to get home after a big party but ultimately arriving home. It’s his day of the week to hang out with his son Charlie. Charlie isn’t thrilled about being at Scott’s place during Christmas season and thinks they’re going to have a bad time. It doesn’t go extremely well at first with dinner getting burnt but then Santa Claus falls off of the roof and Scott is forced to take up the mantle. Yes, completely forced here as he didn’t want anything to do with the Santa gig but the sleigh just ended up taking off with him. Now this adventure is poised to ruin his life and possibly get his son taken away. Can Scott prevent this from happening?

A lot of the fun in the movie is all about the snappy dialogue. Scott has a lot of clear disdain for Neal and you can’t be surprised by that. Who ever ends up liking the replacement? Not to mention that Neal’s always pretty full of himself and tends to talk down to everyone else. Scott just ends up flipping this around and makes Neal look silly each time. Neal just can’t even begin to keep up with Scotty’s retorts which is probably part of what makes him get so furious. The banter just can’t be beat and the film keeps the humor operating at a high level throughout.

Another great moment is when Scott’s company starts to prepare their marketing campaign for Santa being in a tank. Scott points out the obvious flaws in such a marketing tactic but does so in a very comical way which I definitely appreciate. The whole gag of him growing to look more and more like Santa is also handled well and you can even see how that would be rather scary since nothing he tries works when preventing this new design. There’s just no way to avoid his fate and the worst part is that people actually think he’s doing this intentionally to delude Charlie into seeing Santa as being real.

Of course the film is a comedy first and foremost so the characters don’t tend to take a very rational look at this kind of thing. They just all pile on Scott and give him a hard time here. Even the court case is pretty rough towards him although I blame Charlie on that one. So Scott’s definitely a very solid main character. He tried really hard to give Charlie a good Christmas. He may have taken a little while to really get in on the action on how being Santa can be fun but at the end of the day he did really well.

What I have to give him extra credit for is ultimately not agreeing with the rest of the characters and trying to convince Charlie that the whole thing was a dream. He came close to doing this a few times but each time he ultimately ended up finishing strong and resisted the temptation. That’s why he’s a quality character here. He didn’t let Charlie down and he also helped make sure everyone got their presents. He adapted pretty well to the evolving technology at the North Pole as well and by the end of the film you could even call him an expert.

As for Charlie, he’s definitely not my favorite character. He really let Scott down at the hearing and gets very emotional throughout the movie. At least he’s a nice kid though. Charlie does his best to do the right thing even if he doesn’t always make the smartest decisions. Then you have Laura who definitely doesn’t get along with Scott super well at times although their various disagreements tend to feel pretty minor. They have some good banter as well and she’s a lot more agreeable to everything going on than Neal. It’s hard to see how she ever got together with that guy in the first place. He’s always getting completely dominated by Scott in all of their meetings. He also has a lot of resistance against Santa Claus to the point where he really tries to get Charlie away from that.

That said, I can’t fault Neal for that. I don’t think it’s necessary to have your kids believe in Santa from the start. He is fake so getting your kid to learn the true meaning of Christmas can be a good starting point instead of all the fables. As long as you break it gently then I’d say that’s fine. While I mostly describe Neal as a punching bag, it’s part of what makes him a quality character here. No matter how many times Scott insults and humiliates the guy, Neal is ready to get right back up again. Now that’s some solid determination if I’ve ever heard of any.

One of the more enjoyable scenes of the film as well is when Neal and Charlie have a discussion about Santa Claus where Neal brings up all the classic counters as to why Santa doesn’t exist with Charlie countering each one. His counters make a lot of sense after all since the whole time manipulation is a crucial part to Santa’s character. It is absolutely essential that he be able to stop time if he is to visit every child on Christmas in one day. So the fact that Charlie already knew about that trick was really good. If I were Neal though I would have quickly brought some receipts for the items Charlie had asked for in the past to prove that I had bought them instead. I think that would have been a winning argument.

I haven’t talked much about Scott’s adventures at the North Pole but there’s less to talk about there. Bernard is one of the chief elves there and he makes sure that all tasks are being performed correctly. He’s good at his job and a stern, but nice guy. Then you’ve got another elf who is really good at making hot chocolate. Both of these characters do well at the North Pole but I have to say that whenever the heroes are there I’m ready for them to just head back to Earth. We even get some scenes where the cops get involved and start causing mayhem against Santa.

Overall, The Santa Clause is a really solid movie. It’s definitely a title that I would highly recommend checking out. This is a Christmas comedy that has aged exceptionally well. The idea of Santa being a binding contract is very interesting. You’ll be having a great time watching the film because it just has a lot of fun moments and quality character interactions. The whole thing goes by in a flash. I’ll have reviews for the sequels up soon but they fail to quite capture the exceptional balance that this film had. In large part this is because this film ironically didn’t focus on him being Santa Claus for too long. If you’ve noticed, all of the positives that I have listed above barely have anything to do with that job. It’s really more about Scott doing his best to make the end of the year fun for Charlie and the hijinks that comes from this is really what makes the film work so well. Watching this for Christmas is ideal but you still have time to check this out for New Year’s if you haven’t yet.

2 thoughts on “The Santa Clause Review”