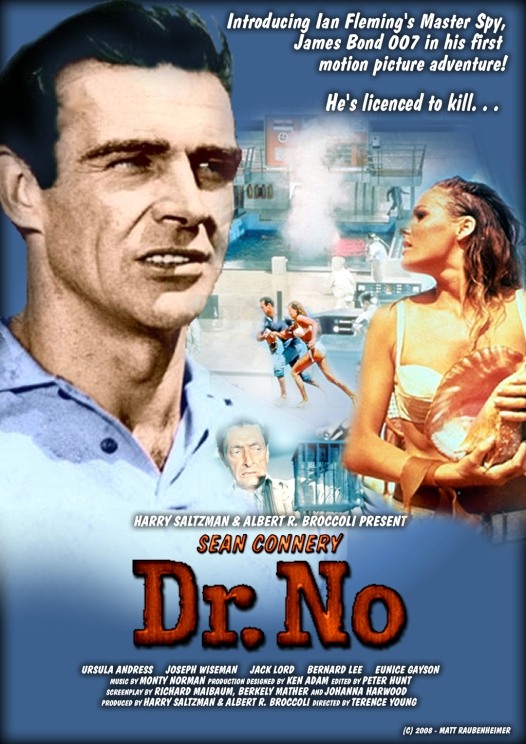 Can it be? Yes, James Bond is back in the running! It’s been many, many years since I saw the original James Bond film. Well before my reviewing days at the very least. Well, now was the chance to re-watch it. It does a good job of establishing Bond’s character and setting the franchise up but at the same time makes a whole lot of errors that remind me why I was never a big fan of the Bond movies. It was only very recently where I would say they were very good. This one for example I would have to give a thumbs down although I do maintain that Sean is still the definitive James Bond.

The James Bond films always start off with an opening montage of fanservice with a random song to let you know that you’ve arrived at the right film. It’s a great way to kick things off on a low note. Fortunately after that we get to the actual movie. It opens up with 3 crooks pretending to be blind so they head on over and murder someone. Meanwhile Bond was winning at the casino when he is called in by M-16 Intelligence. They tell him about the murder and he is being sent over to investigate this. Bond heads off and as soon as he arrives the villains make their first move by having a fake car at the ready. Bond dispatches the agent real quick which establishes him as a skilled agent who won’t be going down easily. There is a lot of mystery surrounding the murder though. Bond’s only hint is that it may involve someone by the name of Dr. No. Time to go and explore his secret island.

So Bond is shown to be a capable agent. The film tries to suggest that he is a brilliant one but I am not convinced. For starters there is one scene in this film where the villain gives him a cup of coffee…and he drinks it. He’s then surprised to find out that it was drugged. On another occasion he follows a suspect to a secluded area knowing it’s a trap and falls for it anyway. He’s lucky that the group he thought were villains turned out to be okay. There’s also the scene where his partner and him go to fight the dragon tank and Bond basically just gives up. You’d think since he took one eye out that he might as well continue at that point. He was close to winning too, but just missed way too many shots. I’d consider that to be another loss though. I think what’s going on here is that Bond has absolute confidence in himself to the point where you could say it is also a weakness. He will jump into any trap without hesitation because he believes he can best it. The problem is that this just isn’t the case. Bond is tough but will still lose against a gun or with sheer numbers just like anyone else. The fact that he can’t control his confidence is his biggest issue.

He has a lot of solid moments as well of course like when he devised a method to find out if anyone had been in his room. He handled the opening car scene rather well too. I also like how his theme music appears almost every time Bond is on screen. It’s a nice little addition there and if anything it’s something I miss from nowadays. I always like the classic approach of having a hero’s theme play when he is around. It helps give the scenes a whole lot of impact. No matter how many times the theme plays though, I doubt it would have helped me like Bond. At the end of the day he’s a big flirt who has affairs with everyone and constantly gets distracted from the mission. No matter how skilled he is, it means that he could have done a lot better without all of that going on. That’s the tragic part of all this.

On the whole I wasn’t a big fan of the soundtrack though. The main theme sounded like something out of Beetlejuice which kept playing on the island. It’s just not really my cup of tea so mainly the only theme that I liked was the classic Bond theme. I suppose in this case it would have to do. The writing was solid though with a lot of good one liners here and snappy dialogue. Bond in particular definitely knows how to go back and forth with the villain rather well. His dinner discussions with Dr. no was certainly interesting to watch. Of course, Bond quit being friendly once Dr. No had Honey taken away. So at that point he just tried to antagonize the guy.

We get 3 different ladies who appear at different points in the film to have an affair with Bond. It’s why no matter who the final heroine is you always know that it’s not going to last. Bond doesn’t even care if the lady is a villain so long as he gets to have his fun first and then admits that he knew all along. I wouldn’t say that any of the 3 are all that good. At least the first one has no shady dealings or anything so she’s about as legit as possible. The second one’s a foreign spy and Honey who serves as the main heroine was illegally trespassing on a private island. I suppose she needed the money and a villain owns the island so it sort of equals out in the end. She certainly gets a needlessly tragic backstory that could have been avoided if you ask me.

Dr. No makes for an imposing villain though. I forgot that the SPECTRE organization was referenced so early in the Bond films so that was nice to see. No definitely commands respect as well as shown by the fear he put in his subordinates just by talking. None of them are going to cross him anytime soon that’s for sure. His robotic hands also make him a bit of a difficult opponent as otherwise he wouldn’t be able to fight much.

There’s a good amount of tension here for sure and whenever Bond catches one of the villains that’s always fun. He certainly gets to show off his skills in hand to hand, espionage, shooting, and even at wit. If not for his overconfidence issues and distractions you can see how Bond would be a really good agent. In a way he’s a lot like this film. This movie would have been really solid without all the affairs, fanservice, and scenes that just don’t further the plot in any way. This would then be a really solid spy thriller but instead it holds itself back which has always been something that the series struggles with.

Overall, Dr. No is definitely one of those films where you can tell that it had a good budget and a lot of effort put behind it. The effects look really good considering how old the film is and the plot definitely works well. The movie has a nice balance between action and light hearted humor so it’s also the kind of flick that should reach a large audience. James Bond just isn’t a particularly likable main character. He’s charismatic and you’ll have a lot of fun with him at times but he could stand to be a little more focused when carrying out his job. You feel bad for his boss who always has to put up with this. Bond definitely gives that guy a hard time. I’ll be reviewing the second film pretty soon so we’ll see if Bond does better in the second film or if it’s all over for him.