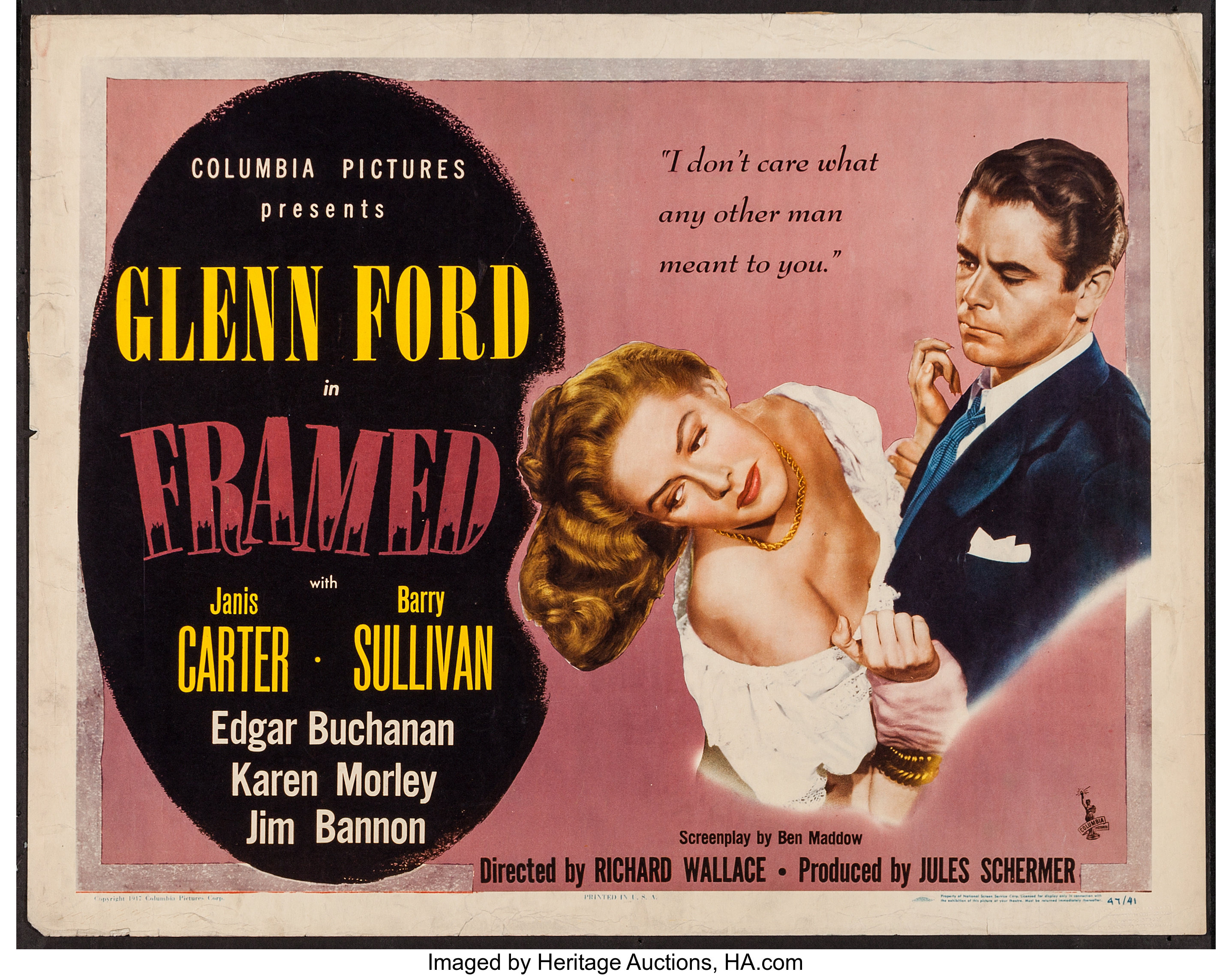 Framed is an old noir film which is a very solid depiction of the genre as a whole. You’ve got every character keeping secrets and acting rather suspicious the whole time. They’ve definitely got a lot of attitude and smoking/drinking is what all of the characters turn to in a pinch. With solid writing and a good story at the ready this is certainly a good movie to check out. You don’t really see a low key Noir title like this nowadays and it’s a solid genre that has faded away.

The movie starts with Mike trying to drive a vehicle into town but the brakes gave way. He eventually makes it but not before crashing into Jeff’s car. The town refuses to pay for the damages even though it was their defective vehicle that caused Mike to bump into the guy’s car in the first place. Mike pays for the damages but gives the sheriff too much attitude so they prepare to arrest him. A waitress named Paula shows up to pay for his bail just in the nick of time though. She wants to be Mike’s friend but the whole thing seems a little odd to the lead. Mike wants to leave town as soon as possible and he may have a ticket out. Jeff’s starting up a silver mining company soon as long as he can get a loan from the bank.

We’ll see if that happens though. Paula is in cahoots with Steve, the vice president of the bank. They intend to steal a ton of money but they need a fall guy. Mike is exactly the guy they’ve been looking for so they intend to bump him off after setting the stage just right. Can Mike really see this trap coming or will he be far too distracted by Paula to do much of anything? There’s definitely a lot of tension as you watch him try to come out on top.

Now, with a premise like this there’s a lot going on. It’s also a reverse mystery to an extent since we know Paula and Steve are the villains from the start but nobody else does. So there isn’t any deductions being done on our side. It’s all about following Mike on his quest. He probably would have even done better with that if he wasn’t always getting drunk though. Keep in mind that he got himself into a lot of trouble early on in the film for drinking so much that he passed out and it happens to him again in the climax. Both times could have been absolutely fatal.

It also makes it a little harder to like Mike. He feels very out of his league in this mystery. He’ll make a decent deduction at times but he’ll handle the execution poorly. There’s one scene where he very nearly gets poisoned and instead of saving himself, someone else has to come through for him. It’s a fun moment in a sense because he had a plan of his own all set and he would not have been able to execute it if he had taken the drink. Things could have very quickly gone south for him. Mike talks tough a lot but he ends up being manipulated quite often and I dunno, I just couldn’t pull for the guy.

The only thing that I will say for him is at least he was quick to try and get Jeff out of a jam even if it meant confessing. He wasn’t just going to let Jeff rot and there was no hesitation there. That’s the only credit I’ll give Mike but at least his heart was in the right place there. Jeff’s also a fun character. The guy has a good business idea set up and you get the feeling that he is very on top of things. If not for the villains messing with him I think he would be in a very good spot to get rich. He takes everything in stride too so he’s an easy guy to root for.

As for the two villains, well they definitely don’t plan things out too well. First off is Steve who just doesn’t think things through. He goes through a cycle that he should have predicted. He cheated on his wife to get along with Paula and doesn’t suspect that she may do the same thing? He’s not the brightest guy out there that’s for sure. Then you have Paula who could have easily ended things without a hitch for herself but let her feelings get in the way which ended up ruining things for her. You can’t mix sentimentality with criminal affairs. That’s just not going to end well in any circumstance and she certainly learned that the hard way.

The movie has a fairly small cast as these 4 are the only characters or note. The heart of the film is really about the strong writing and character interactions between all of them. Most of the scenes feel like they’re taking place at night time, even the ones during the day. Even the bar always feels ominous as the characters walk in to get a drink. It’s always interesting to see how these things looked back in the day because it all feels so different in the present.

Overall, Framed is a pretty solid movie. I probably wouldn’t put it as a top Noir title but at the same time it is a very consistent one. It really gives you all of the elements that you would want to see in such a film from the characters to the backgrounds. The reverse mystery idea is a nice twist as well. Usually most of the film is about finding out exactly what is going on so this time we get to see Mike try to put the puzzle pieces together himself. He’s not the nicest guy so that works in his favor at times as he uses strong tactics. Sometimes just hiding out in front of the house is a good way to gather info as well which worked out nicely for him. He got off a little lucky being able to down someone with a single punch though but I suppose that guy wasn’t as big a fighter as he thought. The key takeaway from this film is that if you don’t want to get framed or be put in a tough situation, just don’t get drunk out of your mind. You should maybe avoid the drinks entirely but at the bare minimum you shouldn’t drink so much that you pass out….