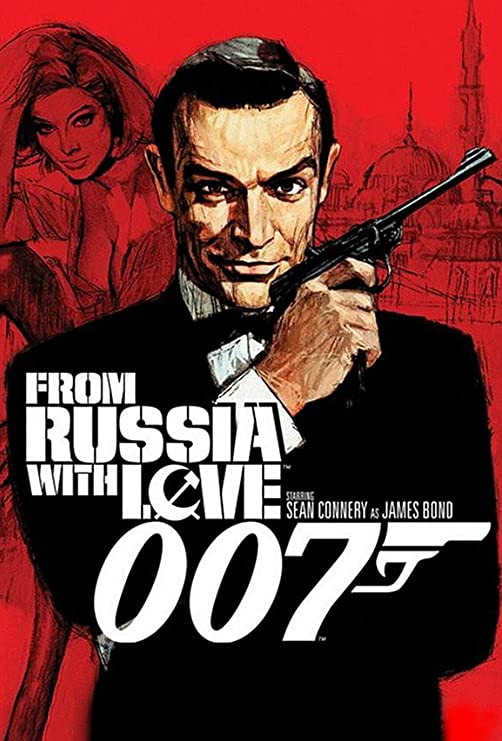 James Bond continues on another adventure with this second film. From Russia with Love is definitely a very well known film in the series and the title is certainly iconic. What’s better than seeing Bond have to go up against his Russian counterparts right? Well, while the action is dialed up and we have some interesting ideas here, I wouldn’t say that it’s a match for the original film. This is still not quite as the point where the James Bond films were epic to watch. I wouldn’t quite give this one a thumbs up.

The movie starts with SPECTRE returning to the forefront. After Bond messed up their plans last time they are not eager to see it happen again. The leader calls in a big chess master and the former head of Russia’s special agent program. They are to find a way to get a device over from Russia and then bump Bond off. Rosa decides to use special agent Tatiana for this mission, all the while pretending that she is still in the Russian program as an officer. Meanwhile M16 sends Bond in to obtain the device after Tatiana claims she wants to defect from Russia. (All part of the plan) Bond figures he’s walking into a trap but doesn’t really mind.

This film has a lot going on at all times and the plot is certainly crafted well. It’s quite hard to predict exactly how things will shake out all the time. I like the idea of SPECTRE trying to pit Russia and the US against each other from the shadows. As an international organization it makes sense that they would be messing with all of the countries. It’s also good to see the organization return since it does work as a nice ongoing plotline in the series. They have trained their fighters rather well.

Grant makes for a very impressive villain, although perhaps too impressive. Throughout the film he saved Bond and gets the upper hand on him. He’s shown to be more powerful and smarter. At that point, what’s left for Bond? His presence is felt throughout the movie and it makes Grant a fairly unforgettable character. His opening appearance was definitely impressive as well so from start to finish this guy made for a good villain.

On the hero side we had Ali this time who was a head of M16 for this division. He’s a pretty good agent who may not be the best at fieldwork but he is highly resourceful and has kept up a good system for many years. Naturally once Bond enters the picture these plans tend to go haywire since everyone is always targeting the agent. Ali did well in his screen time though. M and Moneypenny appear as well of course and they’re always fun supporting characters as well. M likes to shatter all of Bond’s plans all the time while Moneypenny likes to play along. It makes for a good dynamic at the office.

As for the main heroine of this film, I can’t say Tatiana was one of the better ones. She is put into a rather tough mission of course but I feel like she was tricked rather easily. This is definitely a weakness of being in a super secret organization if they never even told their members that the head had been let go. Does Tatiana have no contacts here she could have contacted? The organization itself is to blame for a lot of it but Tatiana should have done some more research as well or just defected for real once she was betrayed. The villains give her so much distance she would have had a lot of good opportunities to pull this off. At the end of the day she does manage to step up though.

Then that takes us to Bond and he takes so many Ls in this film that you wonder why the 007 title is so legendary. He gets beaten more times than you can count to the point where he isn’t even as cautious as he used to be in the first film. I suppose at this point he’s just decided that there’s no point and rolls with whatever the next challenge is. Due to this though, it’s hard to picture him looking really good in a movie. The guy’s just let his overconfidence run wild within himself. As long as he is unable to clear his missions without flirting or getting distracted I imagine that his potential will always be rather limited. He has his moments but on the whole I wouldn’t be able to call him a good lead.

Bond’s worst moment might be near the end where he notices Grant ordering a drink combination that doesn’t make sense. Bond had already been suspicious from the start but he still allows Grant to put something in Tatiana’s drink. Bond calls him out on it and buys the very suspect explanation that it would be easier this way. The whole thing makes him look like a rookie. I thought he was also incredibly harsh with Tatiana during the interrogation in the car afterwards. If Bond was unlikable before that moment then he was really doomed after that.

I’ll throw out a quick mention to Rosa who had a lot of fighting spirit for an old lady. She certainly knew that returning to base with no results would be a bad idea of course so that was good thinking on her part. Her main mistake is that she definitely should have fired right away rather than waiting so long. That’s the mistake most villains make here. With the amount of people who get Bond at gunpoint you’ll definitely always be surprised to see him still alive.

The main issue with the film naturally is its over reliance on fanservice and having Bond have an affair with every female character he runs into. The film always includes a lot of romance only since Bond is constantly jumping to the next character we know that it’s not actually a true romance anyway. The opening credits for the film are fairly painful to get through as well as the film’s artistic style here is really just to sell more tickets with fanservice once again.

At least the movie has a good soundtrack though. The Bond theme never gets old no matter how many times they play it. It’s just classic and I’m up for as many remixes as they’ve got. The action scenes are fun when they happen as well. We even get a train backdrop for a good chunk of the film which works out quite nicely. A change of scenery is always a good idea. I’d also say the writing is solid for the most part. There’s a lot of good banter here and the film handles the light hearted action tone rather well. The movie doesn’t drag on and at close to 2 hours that’s fairly impressive.

Overall, From Russia With Love is a very classic Bond film. It’s got the usual spy adventures along with a number of mysteries and intrigue that Bond must sift through in order to get to the heart of the problem. He takes every single stop on the journey that can be had though and is never in a hurry. His number 1 ability here is really just having a lot of luck and also is fortunate that the villains decide to show him mercy so often. I’d recommend watching a movie like Jason Bourne or Mission Impossible if you want a film that focuses more on the stealth aspects though. They operate at a much higher level.

2 thoughts on “From Russia with Love Review”