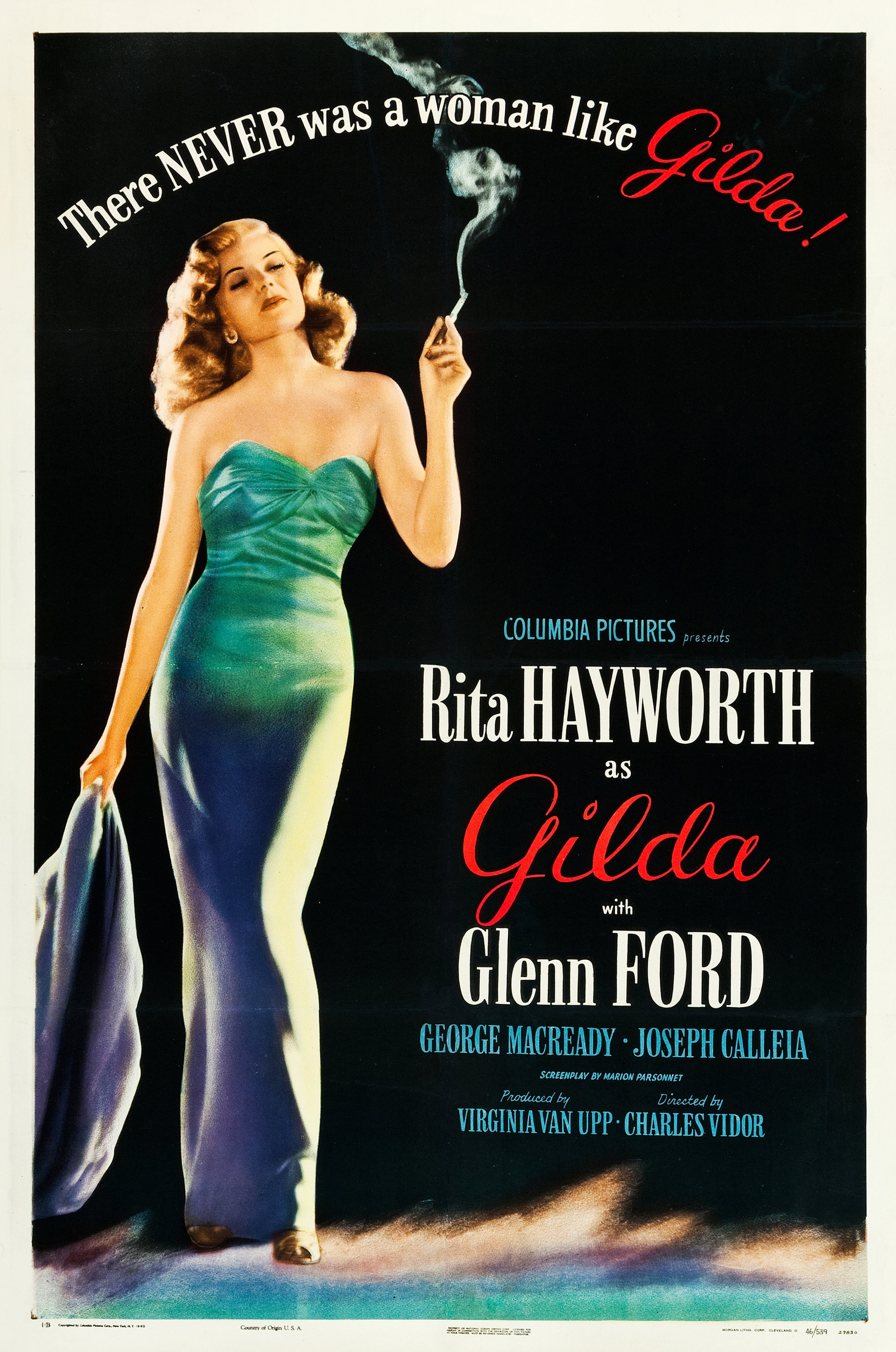 Gilda is a Noir film from a while back. It’s definitely got every noir element you can ask for and makes for a pretty interesting film although the main character is definitely pretty bad. Definitely not someone you can trust in the slightest and there’s a lot of twists and turns here as the characters mess with each other. The main takeaway is that you shouldn’t get involved with gambling as things tend to get dicey.

The movie starts with a confident guy named Johnny cheating a bunch of sailors at cards and running off with all of their money. He doesn’t get far though as someone holds him at gunpoint and Johnny realizes that it may be curtains for him. That’s when a guy named Ballin shows up and rescues Johnny. Ballin is the owner of a local casino and so naturally Johnny repays this kindness by going to that guy’s casino and stealing a bunch of money. He’s caught again but Ballin decides to make him a partner. Johnny is surprisingly loyal and so the two get along really well. This all changes when Ballin goes on vacation and returns with a new wife named Gilda. Johnny and Gilda have quite the history between them which leads to a lot of friction. Gilda is a free spirit who flirts with everyone so Johnny tries to keep Ballin from finding this out. Will Johnny and Gilda’s feud end up destroying the casino?

At first things are going almost too well so you know something’s got to give. Johnny and Ballin have perfect teamwork with each other and the casino is doing better than never. They’re really on cloud 9 and Johnny’s enjoying his new lease on life. As someone who used to cheat a whole lot it makes sense that he would be good at noticing if others were using the same tricks. That said, things all fall to pieces when Gilda shows up. She is intentionally difficult a lot of the time as well as she puts him into tough situations that are hard to explain.

I would make the case that if he was straight with Ballin from the start instead of making up stories then it would have been easier. By the midway point that isn’t an option anymore though as Ballin starts to act rather dangerously. Perhaps Johnny knew that would be his reaction all the while. Johnny was really solid in the first half of the film but then he looked really bad later on. His punishment scheme involving marriage started off as incredibly petty and by the end just turned flat-out villainous. There isn’t any real way to root for him as he went completely off the deep end.

Then you have Gilda who isn’t a very good heroine. She admits to being someone who goes on the rebound all the time. While the characters do ultimately say she never actually cheated on the leads, it’s hard to really believe that given her actions. She actually did cheat on Ballin while they were still married with Johnny and she was already getting into a serious affair with someone overseas until it turned out that he was actually an inside agent. The common theme in both of these instances is that she was really quick to move on so it’s hard to imagine any real romance sticking around for the long-haul by the end. Without trust you can’t possibly have a healthy relationship after all.

The romance in the film in general is just really weak and takes away from the more interesting thriller aspects of the story. You’re interested in the conspiracies and the truth behind the casino. Not in what’s going on between Johnny and Gilda. That’s the kind of stuff you can just leave for a side story or just to the imagination but it ends up playing quite the central focus by the end.

There are two main supporting characters in Pio and Obregon. Pio is a nice janitor type character who completes all of the odd jobs around the Casino. He’s been around for a long time and is always completely confident in himself. Nobody can scare this guy and that’s because he knows just about everything. You can always count on him in crunch time and he was just fun. Then you’ve got Obregon who appears for a lot of the movie. He’s a mysterious character who is always hanging around the scene of the crime just doing his own thing. There are naturally twists around his character and they are handled quite well. He may even be the best character in the film when you think about it.

Finally you’ve got the main villain Ballin and he definitely messes up what was a pretty good system for him. He really had everything he could have wanted and then ended up messing it all up by going after Gilda when he shouldn’t have. If he had just stayed strong or not gotten married so impulsively then he would have been okay. While the guy went crazy by the end, he may have been distracted by success long enough for that not to take effect. It’s quite the coincidence that he ended up meeting up with Gilda of all people.

As with any classic Noir film the writing is important and I would say it is pretty solid here. The banter with Johnny and Ballin is always solid with a lot of subtle jabs thrown in. Johnny has a quick word for anyone who gets in his way. The only time the interactions aren’t as solid is with him and Gilda as you can see the romance coming a mile away so their tough talk just doesn’t work as well. Beyond that the whole film is definitely interesting from start to finish and the pacing means that it all goes through pretty smoothly. There’s never a point in the film where you feel like it’s dragging on.

Overall, Gilda is a solid Noir film. I wouldn’t put it as one of my all time high picks in the genre but it holds up well enough. Gilda is the weakest element of the film to be sure along with the rather weak romance here but the plots about the casino and such are solid. There’s always something going on here and definitely a lot to unpack. All of the characters could have handled the situation differently and would have been in a better spot for it except for Obregon who handled everything well from start to finish. That guy was always a step ahead of the rest. With a solid ending to close things out, I’d definitely recommend Gilda if you want to check out a classic film with a little mystery and intrigue.