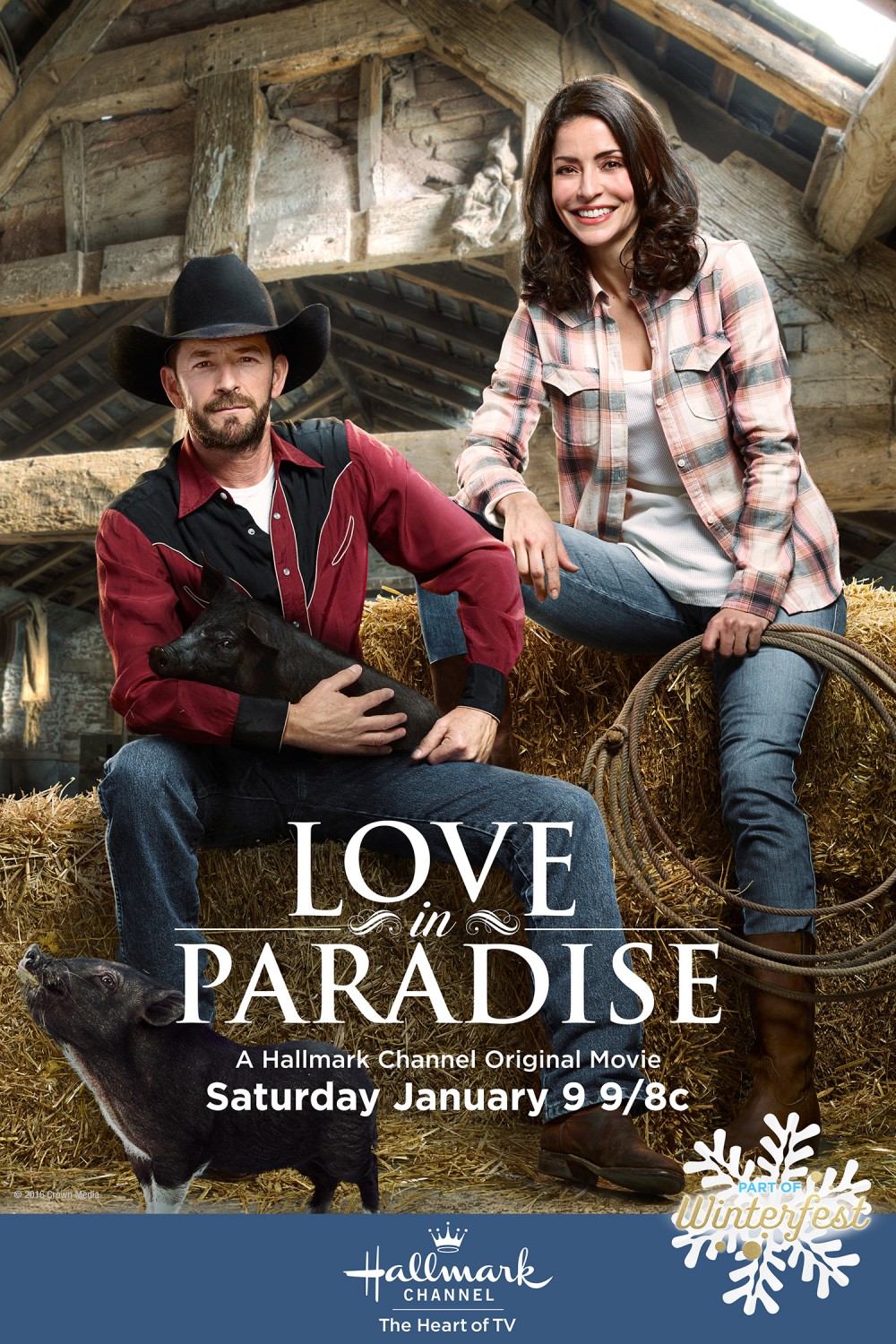 As with all of the Hallmark films I’ve seen so far you can expect Love in Paradise to give you a nice wholesome adventure. It’s a story about coming to terms with the real world and not hiding behind another persona all the time. Certainly there is a lot to appreciate here. While you can see the story beats coming a mile away the execution is definitely on point. I’d recommend checking this one out.

The premise of the movie is that Avery is in a bit of trouble. He’s an actor who has fallen on tough times because his movies aren’t selling very well anymore. He made the best westerns but after 6 films he was just old news. He is now doing bean commercials which do make some good money but he wants something more. Honestly he should be pretty satisfied with the commercials but then his agent receives a call for Avery to head to a hotel for a weekend to drum up business and get paid. It sounds like a win/win but when he gets there Avery is in for a surprise. This hotel is like a very real Cowboy destination so no Wifi or many electronics. It’s very low key and retro, elements that don’t work well for Avery as he’s more of a city guy.

Meanwhile, from the other perspective we have Heather who has been helping her Dad run the farm/hotel for many years now. Unfortunately business just isn’t very good. If they don’t make enough money this quarter then they will be out of business and corporate will be buying off the land. Heather doesn’t want to sell which is why she thought of inviting Avery. Will it really be enough to save the day though? He’s not exactly the farmer that the group had been expecting. Hopefully things work out for the best.

The main dilemma in the film is that Avery just isn’t used to Cowboy life and doesn’t want to bother changing himself. As far as Avery is concerned this is just a quick weekend check. Come to think of it, he may be getting paid in publicity and not actual cash so forget that last part. The issue is that he isn’t good at acting off script. Take the stage away and he has trouble even handling basic tasks like eating meat or getting on a horse. Considering that he can’t do any of this, he definitely should have let the main characters know right away. Granted, he is literally a famous actor so I was surprised that the characters were acting like it naturally had to be how he was off camera as well. The whole point of acting is that you’re playing a role so the opening questions should have been asking him what he could do, how many tasks he actually performed, etc.

Instead they just led him on the Cowboy path and he continued to bluff along which led to things snowballing for both sides. Avery definitely starts out in a bit of a rocky mood as he makes it clear that he isn’t happy and doesn’t even greet the guy who picked him up. Avery barely even acknowledges the poor guy when he first gets to the island. By the end of the film he’s a whole lot nicer and has even adjusted to the land to an extent which was good. It’s a pretty clear character arc from start to finish. On Heather’s side she didn’t really have a character arc since she was already a nice person doing her best but she definitely helped Avery out a whole lot. Without her backing him up Avery probably would have been doomed here. That being said, she was way too quick to believe Avery’s agent without at least trying to have a conversation with him.

Naturally I would say the romance was a bit weak in this case. Basically in the span of a week the two characters fall for each other and the whole thing is rather fast. You feel like it would take a lot longer as they barely even had a chance to be friends first. I’d change that bit of the story so that they were just friends instead. That would be my only big change though. The rest of the story is pretty strong. Having the main guy be an actor here was also definitely fresh on Hallmark’s side as I don’t think we’ve had another film with that role yet, at least from the ones I’ve seen.

The characters will ultimately need to renovate their resort at some point though since Avery’s presence can only help so much. If they continue to operate at a loss then ultimately it will catch up to them at some point. Ideally not as a thief in the night trying to break in though. It was good that Avery was able to take him down there. If he hadn’t been around it would have been a lot worse. The horse riding scenes were fun. I’m always up for seeing some animals running around and having fun, particularly in a film like this where I don’t have to be worried for their very lives. The adventure works out quite nicely this way.

Overall, Love in Paradise is a solid film. While it doesn’t beat a bunch of the classic Hallmark Christmas titles, it’s a pretty strong movie in its own right. I was also glad we didn’t have to worry about the whole ex plot for a change and instead we just had more of a straight up villain by the end. The guy’s redemption saga didn’t feel earned though as it was way too late in the game and sudden considering what he had just done. I wouldn’t have bought into it if I were the characters at the very least. It would just be too hard to buy into. The writing is strong and the pacing is on point so you can’t go wrong here. The humor is good and while you feel Avery could have done better at bluffing, it makes for a lot of fun scenes.

2 thoughts on “Love in Paradise Review”