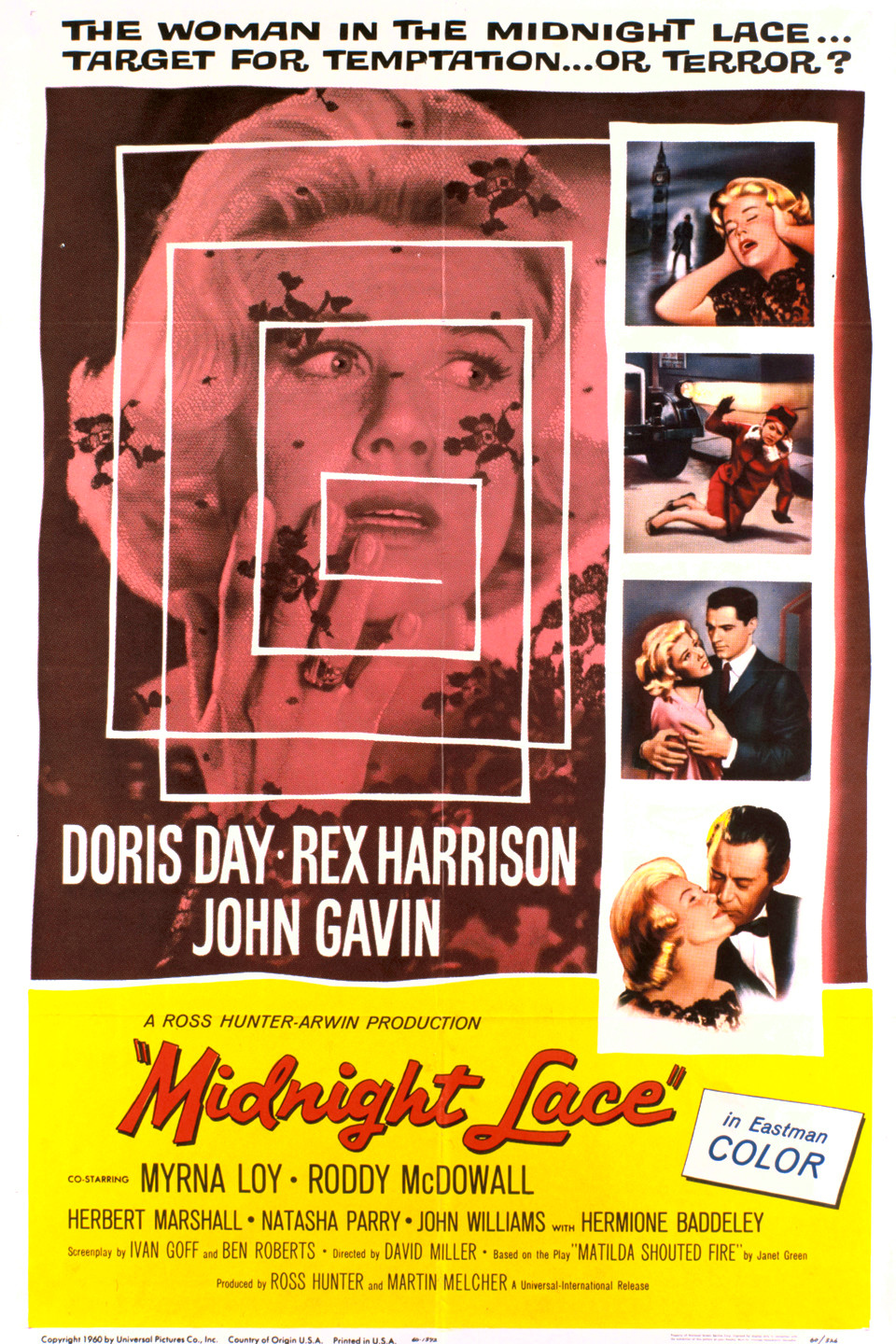 Midnight Lace is a thriller film from a long time ago and has aged pretty well. I would make the case that some characters act a little suspiciously just so the film can use them as red herrings though. In particular I’m thinking of one scene where the elevator breaks down and someone very quietly walks around for a while scaring the main character until finally calling out. Very ominous for sure but you do question why it happened. Well, you should be engaged all the way through though.

The movie starts off with Kit getting ready to go home one day. It’s not particularly late but it is really cloudy outside. She heads into the park when all of a sudden she hears the voice of someone saying that he plans to destroy her before the month is up. This guy terrorizes her from beyond the void all the way home. Unfortunately her rich husband Tony says this was probably just a prank and not to worry about. Once the guy begins calling though this becomes a lot more serious. Scotland Yard is called in but they have a theory that Kit won’t be too fond of. Perhaps she is making this up. Can Kit find a way to prove that she is really in life threatening danger?

I have to say, very few films tend to start as quickly as this one. The villain makes his first move before the credits even start as Kit heads into the park. That’s definitely quite the introduction and starts the movie off on a very tense note. The fog is also an intense backdrop to have because it’s true that you can’t see almost anything which makes the whole area rather dangerous. I would question how the villain is able to see her so clearly without being seen at all but I guess that’s just how it goes. The movie does a good job of balancing the danger aspect of the film very well with the more light hearted nature of the film.

Unfortunately I wouldn’t say Kit is the best heroine I’ve seen in a while. She doesn’t put herself in the best position by lying about one of the calls and also when she immediately slams the phone near the beginning so Tony couldn’t hear what was going on the other end. It’s little things like this which hurt her credibility and make things more difficult for everyone else. I suppose you can’t really blame her for the train incident although I think she should have told someone. I’m surprised nobody noticed her getting pushed either. I feel like someone would have noticed considering what a big push it was even though it was rush hour.

Kit tends to panic a lot but this is a crazy situation. I think some things she could have done to help mitigate the threat would certainly be not to just open the front door when someone is around and when going outside not to go anywhere too isolated. She at least made the right move in not going right back into the elevator alone with the nice guy from downstairs. That would have been a terrible move. The film shows Kit to be a nice person throughout, just not one of the smartest ones. Even choosing to stay by herself at the theater where she naturally gets threatened quite a bit.

The construction guy Brian is a pretty solid character. Maybe at times he seems like he’s trying a little too hard to be Kit’s friend considering she is married so hopefully his intentions are purely honorable. He did a great job of getting his men to secure the facility at one point even if they didn’t catch the guy. He moved awfully fast that’s for sure although I would say it was pretty believable. It’s not like the house is that huge so I do think it’s possible that he could have run out before they got into position. That kind of thing happens.

Scotland Yard also gets a good amount of respect here. They do make sure to look into every scenario. Naturally that does include suspecting that Kit may be faking but they really are obligated to do all of that in order to really crack the case. Meanwhile you have Kit’s aunt Bea who’s certainly a loyal ally to have around. She gives a lot of moral support the whole time which is important. Then you have Tony, but he’s always so busy constantly dashing off to work that he is never really around when she needs him. He does stick up for her in the calls to Scotland Yard but you do get the feeling that things wouldn’t be quite so dire if he was home more.

The movie balances out quite a few plots during its duration which is handled well. You’ve got a mysterious guy wandering around the city who seems to be following her every move. You’ve of course got Brian who finds out her name from the mailman he says and he always really friendly with her. You’ve got a guy who keeps asking her for money for his mother. This had to be the most random of the subplots as the guy would show up to hurl threats and such. Pretty dicey fellow whether or not he is the guilty party. You definitely hope Kit distances herself from him. There’s also her husband Tony who is basically never home as he runs from billion dollar deal to deal as he tries to improve the company. There’s even an ambitious worker who is trying to move up the scale at the company and found 1 million dollars to be missing.

Yeah there’s definitely a whole lot going on in this film that’s for sure. You have tons of suspects which means there is also a lot of red herrings. You’ll want to carefully keep everyone in mind at all times. This all works out rather well though. Again, at times characters can be a bit too suspicious and Kit makes a ton of mistakes but I would call this a solid film. You should be at the edge of your seat the whole time and wondering what will happen next.

Overall, Midnight Lace is a film I would recommend checking out if you like a good ole mystery thriller. The European backdrop works out rather well here since you usually only see Scotland Yard in the Professor Layton games. This has aged pretty well to this day so you still get a solid sense of danger and the film gives you multiple suspects so you get to have fun playing detective while you watch this one. We even get a little fight scene at the end which is definitely good since that’s how you want to end a film like this for sure.