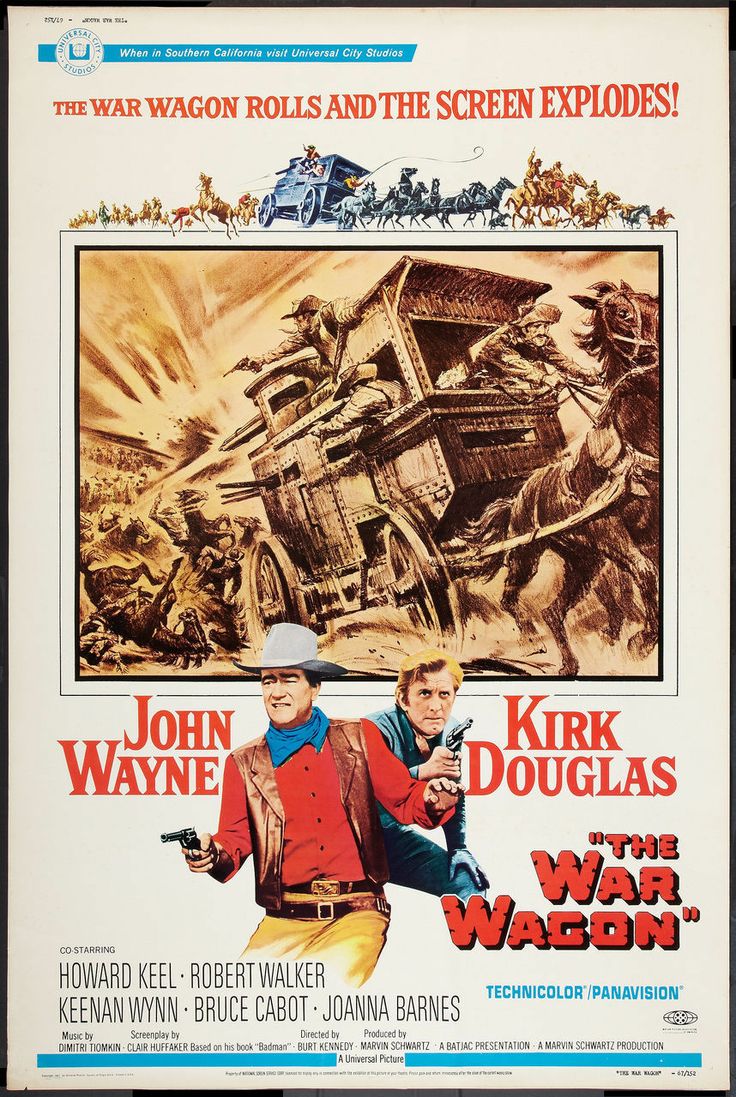 Usually I’m not a big fan of westerns. You do have some that end up being quite good but I find that the average one just doesn’t work too well. A lot of times the characters aren’t super likable and they usually end up hunting some animals in the desert. Well, this one ended up being pretty solid. The War Wagon really manages to grab all of the good Western aspects while dropping the bad ones. It’s just a very solid all around film that could have even jumped up to great status if you cut out one subplot that was holding it back.

The movie starts with Taw getting out of jail early and heading to his home town. He’s still upset because a rich crook named Frank ended up framing Taw and then stealing his land along with all of the gold. The guy is now extremely rich while Taw effectively has nothing left. Frank has an entire army now and basically rules the whole town. Taw isn’t going to let him get away with this, no chance. That said, he will need to get some men to help him out. The issue with just attacking Frank is that Frank has something called the War Wagon. Effectively it’s a tank that stores the gold and it is always guarded by about 50 men. Taw will need to recruit a few other fighters to help him out.

It goes the Magnificent Seven route in that respect as he has to get a bunch of people to help out. By far the biggest character is Lomax though. Lomax was an assassin sent to destroy Taw by Frank but fortunately Taw made a better deal. It’s good because while both characters do get a lot of hype here, I personally thought it was pretty clear from the start that Lomax is the most skilled gunfighter in the film. It’s why he has earned such a good living from taking out targets and everyone gives him a lot of respect. Lomax is also the best character in the film, any scene with him is bound to be a lot of fun. It just wouldn’t be the same without him.

The banter with Lomax and Taw is solid and easily one of the strengths of the film. Additionally the gunfights are pretty solid here as well. There aren’t a whole lot of them but when they arrive they are worth the wait. One solid scene is when two underlings of Frank decide to bag the two heroes themselves. It didn’t exactly go well for them. In a gunfight on its surface you may figure that anyone can get a good win since all you need is one clean shot but that’s why the quickdraw is so important. The main characters can draw with lightning speed.

With two solid main characters supported by good writing and action you can already tell that the film was going to be good. Lets talk about the characters which are more of a mixed bag here. Frank is a solid main villain. He may not be much of a fighter but I thought he was actually pretty smart. The idea of a War Wagon is actually really good and he was careful with his money. He wasn’t taking any risks and was also quick to hire an assassin on his side. If Lomax wasn’t on the take, he probably would have won the film during the bar scene. That was definitely a fun fight I should say and a highlight of the movie. The film even has fun parodying the whole “battle music starts” kind of intro. You hear piano music start to play when the brawl begins but then the camera pans out and we see that someone was playing the piano who quickly gets booted off.

One of the worst characters in the film had to be a guy named Billy. For starters he is a chronic drunk who constantly puts the entire team in danger. Even after being warned several times he still goes to get drunk immediately. The guy keeps on pulling off this nonsense and so by the end there’s no way to find him even remotely likable. When the stakes are this high with the goal being riches beyond imagination, you’d think that you would be able to hold out for a few more days or as long as it takes right?

Then you have Wes who actually is the worst character. His subplot is the one that absolutely didn’t need to be in the film. Effectively he bought Kate to be his wife who basically had to agree due to the money. Not only is this plot completely out of place but it adds nothing to the story. It’s also unfortunate that the main characters are even working with him. Some characters like the drunk you can understand. They aren’t heroic but at least they’re still here for the cash and aren’t acting overtly evil. Wes was really a waste of time here and the sooner he left the better. Pretty much any scene with him is brutal.

Levi was good though. He came in clutch on multiple occasions such as striking the deal with a nearby tribe to help Taw and also helping him out at the bar. Levi even helped reduce tensions with Lomax when the guy wanted more money. Now this is a character who really pulled his weight and without him the team would have been in serious trouble. That’s why the characters are more hit and miss. I’d have definitely been cool with the whole group not really being formed and this being more of a quick buddy cop adventure with Lomax and Taw trying to pull off a big heist. Their banter would certainly go a long way.

Overall, The War Wagon is a solid film that really flies by. I would say one of its strengths here is that it’s just a fun adventure with a lot of replay value. Even the smaller scenes like the heroes debating at the bar can be pretty fun or Lomax having to stall for time as he gets Billy knocked out. It’s certainly not a perfect western but I would say it passes the bar of being pretty good rather easily. If you like the genre then I’m sure you’ll like this movie. It’s got all the fundamentals that you could hope for and then some.

3 thoughts on “The War Wagon Review”