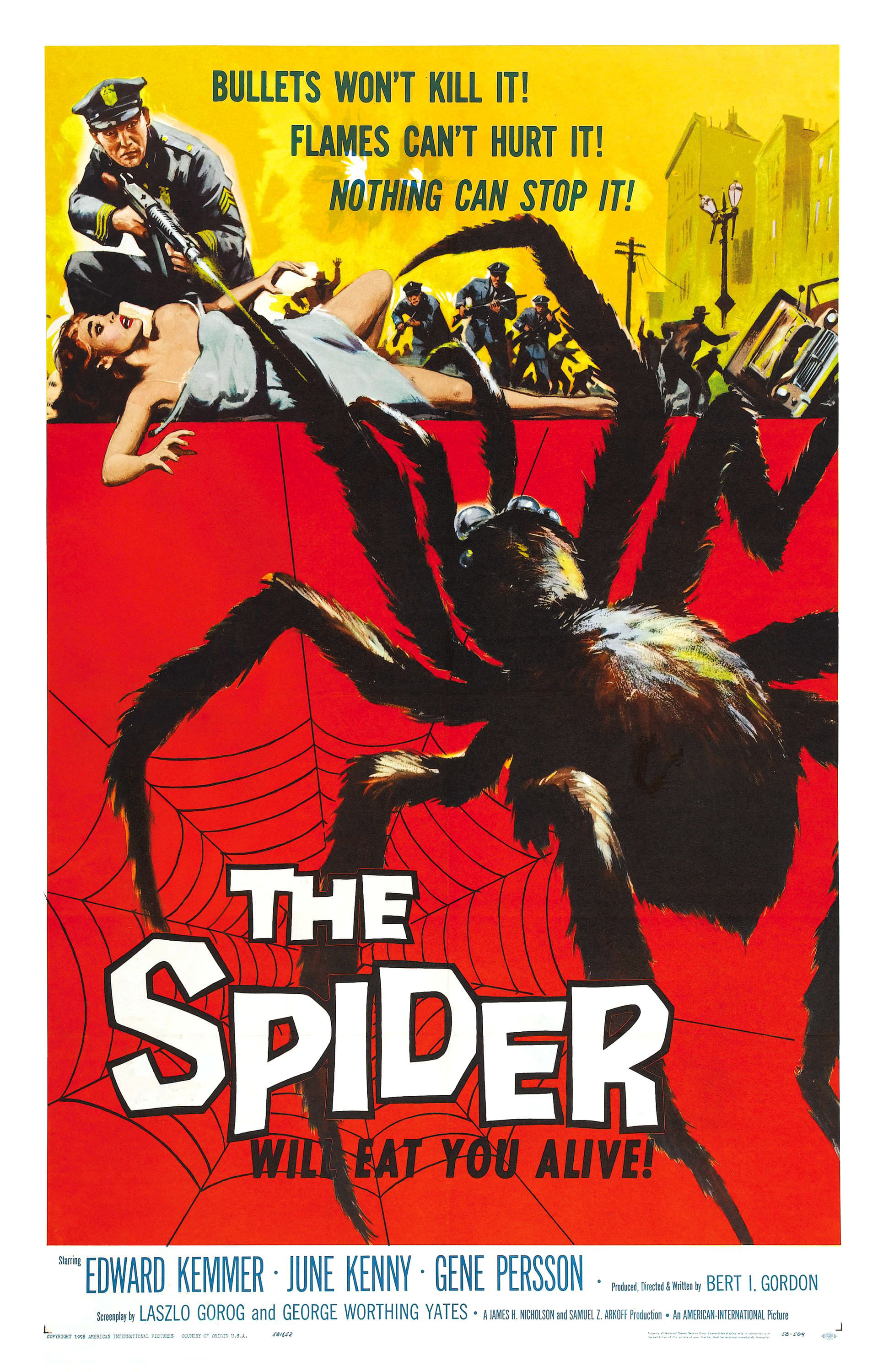 When you think about giant spiders odds are that Kumonga will be one of the first guys you think about. That makes sense because he is a pretty fierce beast. Still, this spider also ends up looking pretty good and it’s a movie that has aged rather well. It’s a simple film that has a plot that you can fully understand within a minute but it makes for a good watch nonetheless. The pacing is good and the cast of characters is likable so that’s already two green flags for the film.

The movie starts off with Carol’s dad on the freeway where he is unfortunately murdered by a giant spider. Carol and Mike head over to a haunted cave to search for him and just barely manage to escape the Giant Spider. They call in the science teacher Kingman as well as the Sheriff. The trouble is that aside from Kingman nobody believes them. Is there any way to convince the town of the giant spider’s existence or are they all doomed to be crushed beneath the power of this monster before they have a chance to properly counter attack? Only time will tell.

Earth vs. The Spider feels like a very short film. I want to say that it’s barely over an hour so things move really quickly. I’ll give the heroes props for venturing through the cave and for escaping with their lives since that seems difficult at times. The film has a good sense of danger with the Spider as it walks around smashing buildings and such. It’s certainly big enough to be a true threat after all so it’s not like it’ll be easy to block it away.

That said, the Spider seems kind of weak despite this. The heroes are able to push it away with electricity, fire, and knockout gas. When you put all of that together they should be able to win this pretty quick. I was actually a little puzzled when the cops basically said to ditch the knockout gas since it didn’t prove to be fatal. The original intent was to destroy the spider but surely using a substance that knocked it out for hours would still be handy here right? At the very least I think they should have kept it as an option. We do get some nice chase scenes with the Spider though so it shows that even as a giant monster it still had a good amount of agility.

As for the human characters, Kingman is the obvious MVP. For starters he believes the kids right away and also had fun making very serious suggestions about handling the spider even when nobody else believed him. He was someone you could count on the whole time. He was quick on his feet and if a plan didn’t work then he would quickly transition to a new one. Kingman was just a pro and he had a lot of snappy dialogue. Another strength for the film is that the writing is solid which is to be expected for a retro film like this. They always seem to have stellar dialogue.

Mike and Carol may not be able to steal the show the way Kingman does but they are good characters as well. Mike is considerate and always steps in to help Carol when she wants him to do something. At one point he was ready to finally watch a movie only for her to have him go back in the haunted cave again so he gets props for that. Meanwhile Carol is good as well. While I don’t agree with her decision to go back into the cave and risk certain destruction for a necklace/ring, I suppose she did well in going through most of the cave. It’s just a little mixup of priorities in this instance.

The Sherriff was definitely a fun character to help keep the leads in check. Naturally he doesn’t buy into this giant spider business one bit and why should he? Giant spiders are the stuff of legends after all. In general the town is pretty nonchalant about having a giant spider once it’s found out though so I guess the town is made of sterner stuff. The Sherriff may be skeptical the whole time but to be fair he did step in when needed.

While the film may not strike fear into your heart the way the movie was probably hoping it would, the core story is still good. It’s the kind of movie that’s easy to watch. The core fundamentals you want from any film is a cast of good characters and solid writing. This movie has both of those elements so it’s not really surprising that it ended up being a solid watch. If anything it ends so fast that you really wouldn’t mind if it lasted a bit longer. Even if just to see more of the town’s reactions as some people fled while others took charge.

Overall, I would recommend checking this film out. The title may have a lot of hyperbole as there isn’t really any big battle involving the whole planet but if you think of the town as it’s own little world then I guess that’s the best we can come up with here. The Spider itself is solid. The design may just be that of a normal giant spider but at least the roar is unique even if it doesn’t seem very fitting for the monster. If you like a good ole fashioned creature feature then this is definitely one you will want to check out.

2 thoughts on “Earth vs. The Spider Review”