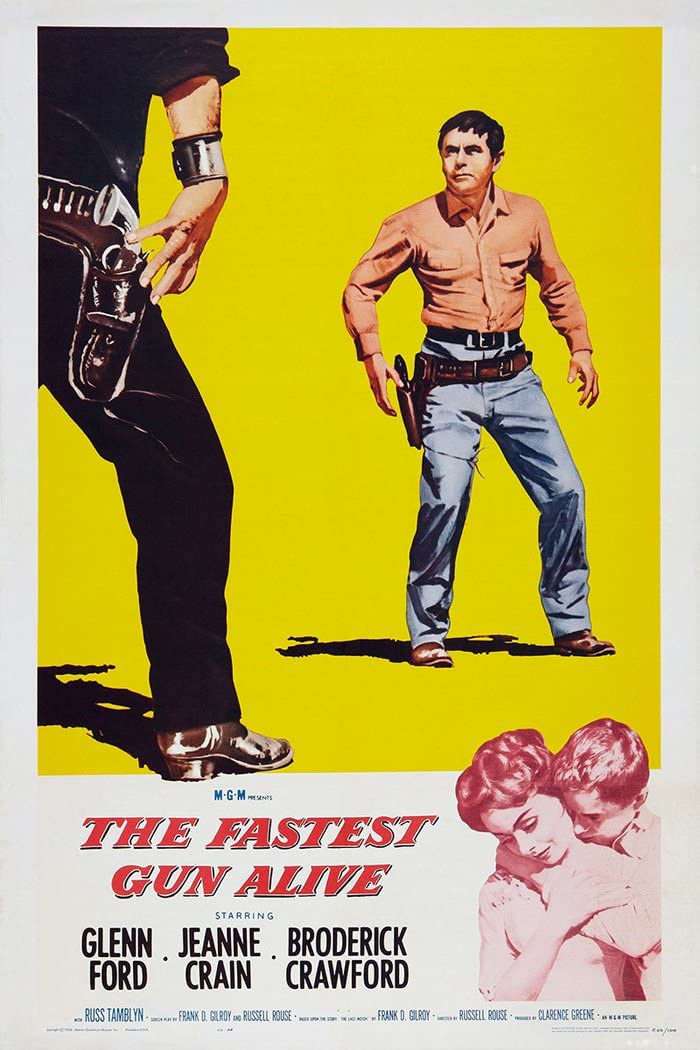 It’s fairly rare to have a western without much travelling or gunfights but The Fastest Gun Alive manages to pull this off pretty well. It’s more of a down to Earth story about a guy trying to walk away from the business. Unfortunately the main character doesn’t end up being a likable character though as he makes the wrong decisions consistently throughout the movie. The movie survives despite him though and it’s a pretty solid experience. You’ll be kept interested throughout.

The movie starts off with the main villain Vinnie searching for a man named Fallon. Fallon is said to be the fastest gun around. Well, Vinnie takes him down in a gun fight and is now satisfied as the best. Meanwhile, news travels around to a small town where everyone is fascinated by the idea of someone being this fast. This annoys George because he is actually a very good gunman, but he doesn’t let anyone know it. He prefers to live as a very meek shop owner who just minds his business. The issue is that this all starts to get to him more and more. Will he remain strong or is it time to show everyone what he’s got?

Needless to say, George definitely doesn’t stay strong and quickly tries to prove himself to everyone. Part of what makes the character annoying is that he lets everyone get to him rather easily. He doesn’t help matters either by deciding not to dance or constantly going out on walks instead of actually minding the store. He basically leaves all of the work to his wife Dora. We find out later on that George also lied to her about getting rid of his gun when he kept it the whole time. He just made every kind of mistake possible and either got drunk easy after his half a cup or his desperation made him drunk. Either way he definitely did not look good during the whole saloon scene where he is making fun of everyone.

I can maybe get past that except then at the end he is too afraid to go out and fight Vinnie when the villain hears about this. Not only is this directly George’s fault for showing off but he is willing to let the entire town burn if it means that he doesn’t have to fight. It makes sense that some people don’t want t fight in a gun battle of course and George would usually have the right to refuse a challenge but not in this circumstance. It’s only when another member of the town tries to go in his place that George finally works up the courage to act. A lead who wants to be recognized but then immediately regrets it is just too wishy washy to be a quality lead. He should have just been content with the life he had with Dora. She did her best to help out and he wasn’t grateful.

Meanwhile Dora is a solid character. She does her best to keep George on the straight and narrow but at the end of the day she has her limits too and made sure to hold her ground. Moving again wasn’t going to be an option for her. She definitely didn’t support the gun business in the slightest. As for the rest of the town, they all seemed pretty friendly except for one guy who was always getting on George with some passive aggressive comments. It’s clear that the guy had some strong views about guns but at the very least that’s as far as he went. With the rest of the town seeming pretty supportive to me I still say George had a great gig here that he was willing to blow for a few minutes of fame. Even the older man who kept recounting the story about the gunfight was having a good time. It was a pretty thrilling experience for him so why not enjoy it a lot right?

We get one long dance scene in the film where one teen gets to show off his moves. It feels like the potential start to a romance subplot that never actually happens. I feel like there was more that was cut out from the film or something. Still, it’s a pretty solid scene because the moves are quite impressive. He’s able to use all of the objects in the room to his advantage with some tight footwork and clearly he has spent a lot of time honing his skills at the barn. So while the entire scene is really filler to be honest, it’s a pretty fun scene to watch. I’d say it even beats a lot of the more classic dancing scenes you would typically see because this felt more like an athletic exhibition.

Meanwhile Vinnie was a solid main villain. He has an honor code which I like and he was also smart enough to make sure that none of the other two villains would stab him in the back. The guy’s gun skills were also the real deal so he makes for a very complete villain. The icing on the top was the fact that he has a good honor code where he doesn’t attack kids or dogs. You really couldn’t ask for much more out of a quality villain like this. There is a lot of build up to his big fight with George and it makes for an epic way to end off the movie. The ending to the film is quite solid and a great way to wrap things up.

The writing in the movie is on point as you would probably expect. The dialogue is pretty strong and there are a lot of quality discussions the whole time like deciding how to handle the situation with Vinnie getting ready to burn the town. I may not have liked George but he was still written well and never got crazy or anything like that. All of the characters are pretty reasonable and even minor characters like Vinnie’s right hand man get some personality in their brief appearances.

Overall, The Fastest Gun Alive is a solid western film. I like the idea of several characters all fighting it out to prove that they are the fastest. It’s a title they clearly all want to own since it’s a matter of pride. Even George was more into it than he would let on. At the same time as a blind character in the movie said, there is always someone faster. Your opponent could have a jammed gun like someone else mentioned or maybe just a bad day. In a gun draw where both characters quickly try to fire off their shot, there are a lot of ways that things may not plan out as you figured. Every bit of speed comes in handy in those ties though. I would definitely recommend checking this film out if you like the Wild West. It’s an all around solid title.