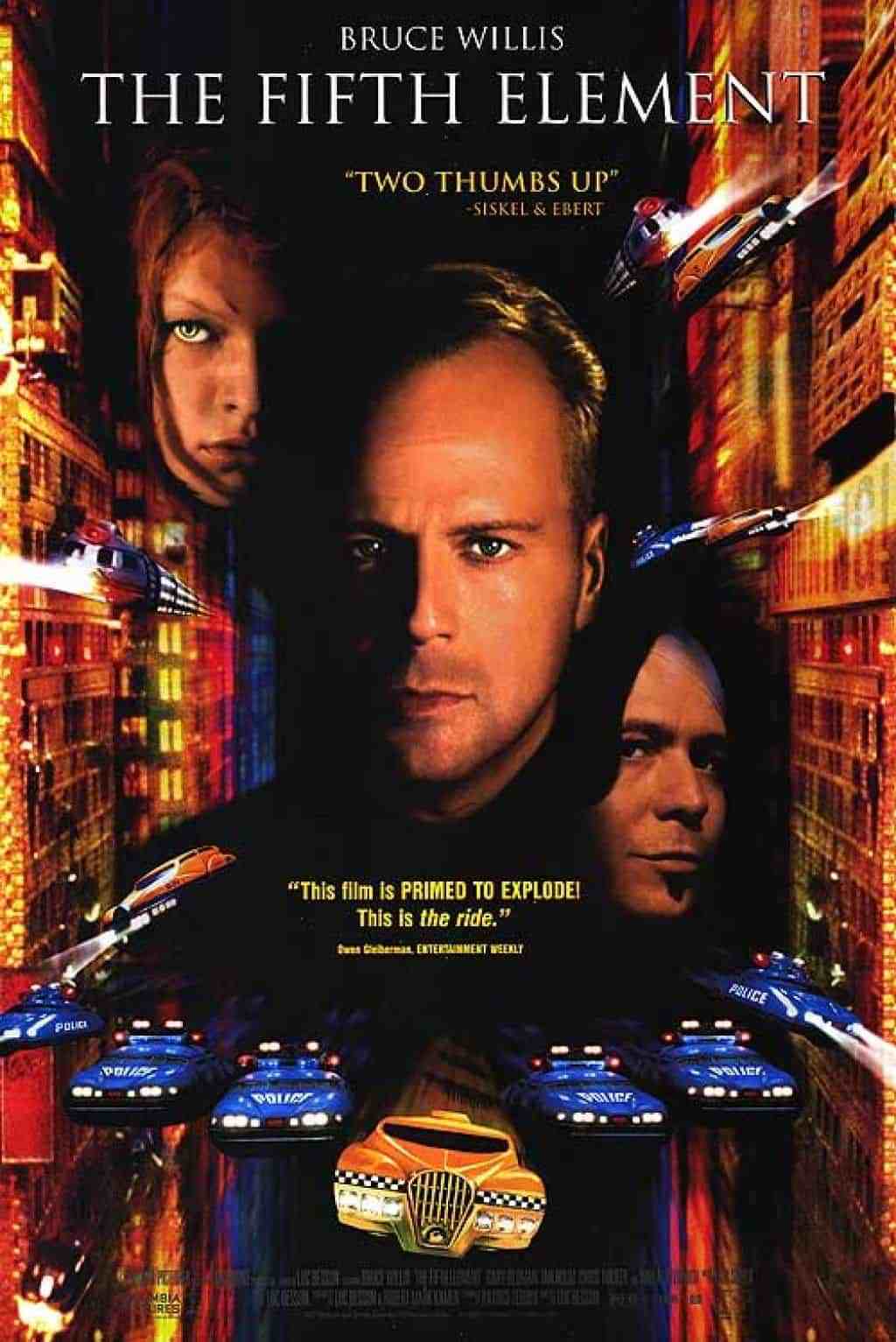 The Fifth Element is one of those Sci-Fi films where you hear about it all the time thanks to the main villain but otherwise I couldn’t say that I knew much about the film. Sci-Fi always has a lot of potential though. This film balances out the action, sci-fi, and even some humor fairly well. It’s not exactly the perfect Sci-Fi film out there but it has enough fun with itself to make this a pretty fun movie. At times part of it almost felt a bit like a parody.

This film starts off with someone finding out the truth behind the universe. There is a battle coming up where the forces of darkness will destroy Earth. That’s when some aliens invade and murder the guy. They leave a key with a priest telling him that they will return in 300 years to help us fight off the evil. We then jump 300 years into the future where the Darkness has returned. His name is Mr. Shadow and to the rest of the world he appears to just be a giant mass of nothingness. He blows up a nearby ship and keeps on heading towards Earth. The President is forced to call in the one man nobody ever thought would return.

We then cut away to the main character, Korben. Korben is a cab driver who used to be part of the government but things didn’t exactly end well for him. He’s just going about his day when a girl crash lands in his car. Her name is Leeloo and she is the last survivor of the alien species who promised to return to save us all. Unfortunately she is only part alien as the rest of her got blown up by bandits so she’s mostly an android now. She needs to find the rings so she can return to the temple and restore the 5 elements before Mr. Shadow arrives. Her assistant here is the Priest. Korben doesn’t exactly want to get mixed up in this but he’s basically threatened to do this or die so he prepares to locate the rings. Meanwhile you’ve also got bounty hunters and other rogues trying for the rings as well.

Naturally there is a whole lot going on here which is pretty neat. Pretty much every character wants to get the rings. When you factor in that you’ve got multiple alien species running around, a rich guy who wants power, and the Priest then there are quite a lot of factions to consider. While the film could have easily been overloaded, that’s where some of the humor starts to set in. One of the solid things about the film is how it plays around with this. The Priest ends up being a tennis ball with the way he is smacked around the whole time. Then you have the rich villain Zorg who betrays the other aliens while running in to end things himself. The film is at its best when it isn’t taking itself super seriously but I would make the case that it is rarely being serious.

Take all the scenes of the President and his men trying to fight off the Shadow. When their attacks don’t work, everyone on the first ship completely freezes up until the Shadow envelops them. I felt like that was taking a shot at how everyone always seems to freeze up in these things. The President made for a fun character up in the ship even if he wasn’t able to be all that effective in the end. His final scene with Korben’s mother was also pretty neat since you can respect the fact that she wasn’t about to get tricked even if there was some irony in the moment to be sure.

I would say the best scene in the film had to be when Zorg managed to finally get back onto the ship with the plan to deactivate the bomb. Turns out there was another bomb. The whole thing was so unlikely and sudden that it just works. You pretty much never see a second bomb show up in that kind of situation so that was cool. Again, the film’s humor was definitely on point here which helps to mask some of the issues.

A big issue here would be the power levels for Leeloo. So, on one hand she is shown to have enough physical power to be able to punch through a barrier that was deemed “unbreakable” by the futuristic tech experts. She was barely even awake and did this so clearly she is super strong right? Then she masters all of the data files of humanity so she learns advanced hand to hand combat as well. Despite this, she is rarely portrayed as being very powerful. She got one cool scene where she beats up a bunch of opponents on her own but then runs when Zorg shows up and ends up getting blasted as a result. She should have pressed the attack. Even the plan to get the rings didn’t make a whole lot of sense. Why wait until after the show when the savior of the universe is this powerful?

The characters rarely seemed to acknowledge that Leeloo was all that powerful. I also thought the point of her scanning the databases was also to learn English but she doesn’t end up learning until the very end of the film so it was a bit odd. Ultimately the movie definitely fumbled the ball rather massively with her character. In the end she was used a bit more for fanservice than to acknowledge her combat abilities. The one scene of her beating up the aliens was fun but we should have gotten more of that.

It goes without saying that the romance in the film is pretty rushed as well. As with most movie romances it’s just hard to buy into this. It all happens within the span of a few days and Leeloo didn’t even like Korben at first. Korben was also presented initially as a character who was too busy for romance and was waiting for the perfect woman. As soon as he hears that Leeloo was made to be the perfect being it’s like just the title was good enough for him. Korben has his share of solid scenes outside of the romance though. He does a good job of pushing the other characters around when they try to trick him like the Priest assuming the identity. Additionally when it came time for a firefight he definitely did step up when it counted. I wouldn’t say he’s a great main character but he was fun.

The Priest tends to get a lot of the humor moments in the film and he handles them well. He always has a shocked expression on his face which ends up working well. I wouldn’t say all of the humor in the film lands though. For example I wasn’t a big fan of Ruby’s character. Pretty much all he does is panic a whole ton. The point is that he’s extremely over the top but the gimmick gets old pretty quick. Usually for jokes the point is to go in, deliver the punch line quickly whether it’s visual or through witty wording and then move on. The tougher part for character gimmicks is that if it’s ongoing you have to do something to keep it fresh. This film didn’t really pull that off here.

A good gag for example if Zorg nearly choking and dying in such a crazy way. It’s unheard of for a main villain to go down like that especially during his big monologue. That’s when the film is at its best, just being incredibly crazy like that. He was definitely a fun villain even if he was out of his league a lot of the time. Really, I think this film should be considered as a sci-fi/parody with those being the two main genres. If this wasn’t intentional for most of these scenes then I would be quite surprised. Naturally there’s a lot of ways you could turn this into a series with sequels and all but as a one shot all of the plot lines do end so technically it’s not like you definitely need a sequel or anything like that.

Overall, The Fifth Element is a fun film. It’s a sci-fi title that pokes fun at a lot of the usual scenarios while still keeping with a full story experience. I would have liked to have seen a little more action with Mr. Shadow to be sure but making him a literal ball of darkness was a bold approach. Initially I was also surprised that the futuristic robot aliens were so weak but then I figured that may have been the point as well. Even one of the aliens being unceremoniously crushed by the rock when giving his parting speech to the humans was likely intentional. Same with their being blasted out of the sky by random aliens. Events tend to happen rather suddenly and without warning in this film. It doesn’t pull its punches. The power scaling is definitely a bit off at times though. If you’re looking for a pretty light hearted sci-fi title then this is the one you’ll want to check out.